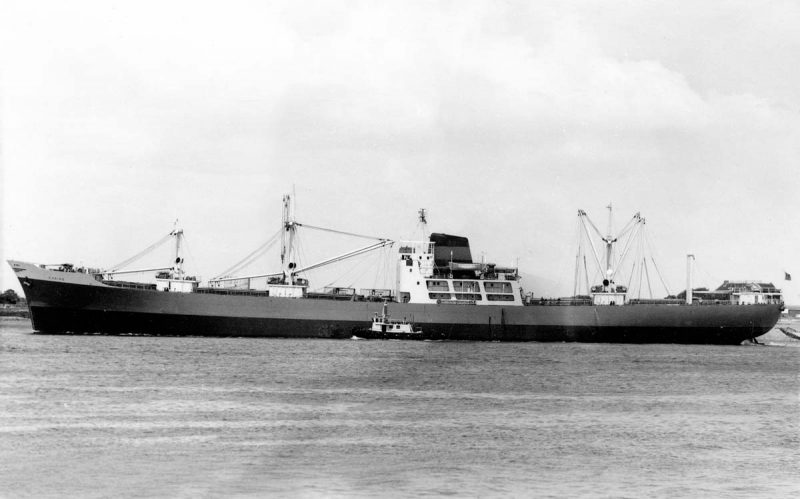 October’s unknown ship brought many replies most of whom identified her as the Exning.

Peter Sommerville writes: I think this ship is the Exning (7,465grt), built by Austin & Pickersgill Ltd., Sunderland in 1965 for W J Tatem Ltd. (Atlantic Shipping & Trading Co. Ltd). She looks a typical 60s tramp ship and had a couple of similar fleet mates, Glanely and Landwade but going by the number of letters on the bow I think I have picked the correct ship, also she appears on the cover of “Tramp Ships” by Roy Fenton of which I have a copy. Her funnel should have a white T on the middle red band but she may have been on charter in this photo or possibly later in her career when after being sold in 1973 when she became the Maritsa (Greek Flag) then in 1974, Maritsa III (Panama Flag) and finally the 1983 the Cyprus Trader (Cypriot Flag). She was broken up at Gadani Beach in 1985.

George Morrison writes: I think this month’s unknown ship is the 7,465 grt Exning built by Austin Pickersgill Ltd. of Sunderland for Atlantic Shipping & Trading Company Ltd. and managed by W.J. Tatem. Main dimensions 516’.0” x 70’.6” x 29’.11” powered by a 3 cylinder Sulzer engine. She was sold to Maravilia Compania S.A. of Panama in 1973 and renamed Maritsa. In 1974 she was renamed Maritsa III. She was sold again in 1983 and renamed Cyprus Trader and subsequently broken up at Gadani Beach in 1985.

John Livingstone writes: Just a guess for this one. She is a Burntisland Economy Ship and I will say Penbryn of Brynymor Steamship Co. Ltd., Cardiff. In this photo possibly Mount Aetna of Kulukundis Shipping, Piraeus.

Alan Blackwood writes: This month’s unknown, as named in the photograph, is the single screw shelterdeck tramp Exning, the largest and final vessel to be constructed for her owners and named on a ‘one-off’ basis after the district near Newmarket in which the home of the Shipping Company’s last Chairman was located.

Exning was completed at Austin & Pickersgill Limited’s Southwick yard, Sunderland during February 1965, when registered at London to the ownership of the Atlantic Shipping & Trading Company Ltd., under the management of W.J. Tatem Ltd.

Exning was the last vessel to be operated under the Tatem houseflag and following a board decision during 1973 to withdraw from shipowning after some 76 years of trampfleet operations, she was sold to the Maravilia Compania Naviera S.A. of Panama when renamed Maritsa and registered at Piraeus for continued trading under the Greek flag. The following year and without change of ownership, she was renamed Maritsa III and registered at Panama for operations under that national flag.

She was resold during 1983 to the Limassol based Milkyway Soc. Anon. when renamed Cyprus Trader for Cypriot flag operation. On 6th April 1985 she was delivered to Gadani Beach for demolition by the Molasses Trading & Export Company.

Peter Harris writes: This month’s unknown ship is the Exning built in 1965 at Austin Pickersgill and was the last ship built for Tatem Steam Navigation.

She was a conventional tramp of 7,465 gross tons and was sold in 1973 as Maritsa and in 1983 as Cyprus Trader. She was broken up at Gadani Beachin 1985. She was named after the family house at Newmarket.The company ceased trading after her sale.

Mike Goadby writes: This month’s unknown ship is the 10,596grt M/V Exning, built in 1965 by Austin & Pickersgill at their Southwick yard in Sunderland, yard N0 840, for W.J. Tatem, Atlantic Shipping & Trading Co. Ltd. She was sold in 1973 to Maravilla Cia Nav., Greece and renamed Marita. In 1973 renamed Marita III, 1983 sold to Mikkway SA Cyprus, renamed Cyprus Trader, 1985 sold for scrap and broken up at Gadani beach by Molasses Trading & Export Co. She was the last ship to fly the Tatem house flag.

Carmel Borg writes: The unknown ship in the October 2018 issue of Shipping Today & Yesterday is the general cargo ship Exning, built in 1965 by Austin & Pickersgill at their Southwick Shipyard for Atlantic Sg. & Tdg. Co. of London. She was sold in 1973 to Maravilia Cia Naviera SA of Piraeus and renamed Maritsa. In 1974 she was renamed Maritsa III by same owners but transferred to the Panama flag. In 1983 she was sold to Milkyway SA of Limassol, Cyprus and renamed Cyprus Trader. She was broken up in Gadani Beach, Pakistan in 1985.

Tom McLaren writes: The unknown ship in the October 2018 edition is the Exning. She was built by Austin & Pickersgill, Sunderland and completed in 1965 for Atlantic Shipping & Trading Co., Tatem Steam Navigation Co. Ltd. Gross Tonnage 10,596.

Gerald Dodd writes: I think that the October ship of the month is the M/V Exning, official number 306260, built in1965 for the Atlantic Trading co, W.J. Tatem. She was launched in November 1964 and was completed in 1965. The Exning was built in Austin and Pickersgill’s Southwick yard in Sunderland, as number 840. She was 10,596 grt with a length of 516 feet and a breadth of 70 feet 6 inches and had a Sulzer oil engine driving one screw. The Exning traded with Tatems until 1973 when she became the Maritsa owned by Maravilia Cia Naviera S.A. of Piraeus. In 1974 she became the Maritsa 3, and registered in in Panama. In 1983 the Exning was sold again and was renamed the Cyprus Trader, owned by Milkyway, S.A. of Limassol. In 1985 the Exning was broken up at Gadani Beach.

John Livingstone writes: The Unknown Ship for October is the Exning built in 1965 by Austin & Pickersgill (Sunderland) for Tatems of London. After a few name changes later in life she was scrapped on Gadanni Beach in 1985.