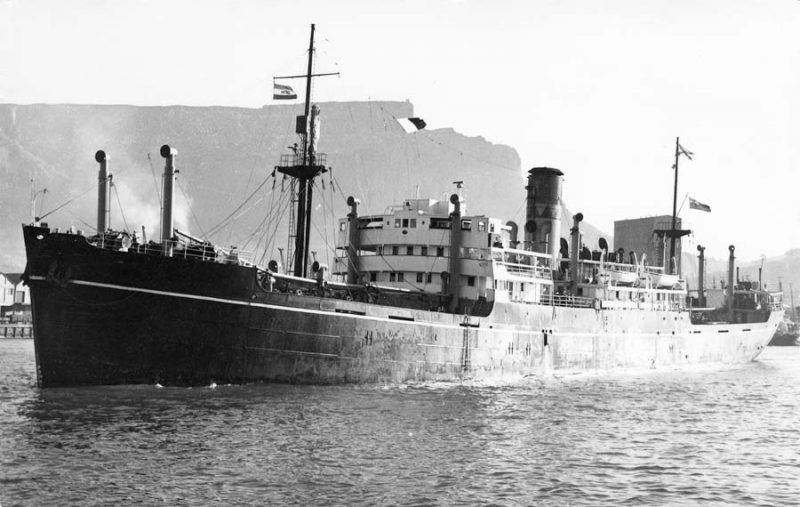 December’s unknown ship brought many replies most of whom correctly identified her as the Itaura.

Peter Sommerville writes: I was thrown a bit this month as the ship in question is sporting a James Nourse Ltd. funnel but clearly not their traditional grey hull. After some research I am of the opinion that this vessel is one of British India’s ‘I’ class of which there were seven built, two just before WW2 and the remaining in the early 1940s. There were two more similar built in 1946 with names starting with a U but they had additional lifeboats which rules them out. The ship I am opting for is the Itaura (6,793grt) built in 1940 by W Gray & Co., West Hartlepool and on completion became a Military Stores Ship for the entire war. She was returned to BI for her intended service in April 1946. She was sold in November 1958 to the Pakistan S.N. Co. and renamed Jahangirabad a year later. In 1965 her owners became the East Bengal Steamship Co. and she was broken up at Gadani Beach, work commencing May 1968. The others in this class were Itinda/Indora/Itria/Itola/Ismaila and Ikauna all surviving the war with the exception of Indora.

I assume in the photograph she was on a James Nourse charter or, as this company was also part of the the P&O group along with BI, maybe it was just an internal transfer.

Michael Green writes: The unknown ship in the December 2018 issue is the Itaura, on 168012, 6,793grt, built by William Gray, West Hartlepool, yard No 1103 for British India Steam Navigation Co. Ltd.

She was sold in November 1958 to Pakistan S.N. Co., Chittagong and renamed Jahangirabad in 1959. In 1965 her owners became East Bengal SS Co. who sold her for demolition at Gadani Beach in May 1968. The photo shows her leaving Cape Town when on charter to James Nourse.

Alan Blackwood writes: I believe this month’s unknown to be the 6,802 grt single screw steamer Itaura, the fifth of a series of seven vessels ordered by the British India Steam Navigation Co. Ltd. of London in anticipation of receiving shipbuilding grants under the Government’s 1939 British Shipping (Assistance) Bill and to replace a similar number of WWI standard vessels acquired by the Company from the Government during 1919. Of the replacement septet, all but the first two examples were constructed under wartime austerity conditions with the last four, displaying vertical funnels, essentially indistinguishable one from the other. Itaura is seen here on term charter to P & O group associate James Nourse Ltd. of London, duly displaying her charterer’s funnel markings together with its houseflag at the main truck.

She was completed by Wm. Gray & Co. Ltd. of West Hartlepool and delivered on 28th September 1940 when registered to the ownership of British India at London. She was taken up immediately for war service initially by the MoWT Liner Division and from November 1941 to April 1946 and painted overall grey, operated as a military store ship.

With maximum dimensions of 442’10” x 57’7″ x 32′ (moulded depth) and a summer draught of 25′, her propulsion machinery consisted of a single 3,500 ihp triple expansion engine and low pressure Bauer-Wach double reduction geared exhaust turbine hydraulically coupled to a single screw shaft and constructed by her builder’s associated Central Marine Engine Works, also of West Hartlepool. The whole was fed by steam from four single ended coal fired boilers to return a speed of 11 knots. During July 1949 her boiler furnaces were converted to burn oil fuel.

On 15th November 1958 Itaura was sold out of the fleet to Pakistan Steam Navigation Co., renamed Jahangirabad early the following year and registered at Chittagong. During 1965 her registered ownership was transferred to that of the East Bengal Steamship Company without change of name or PoR. Following her delivery to Gadani Beach, her demolition commenced during May 1968, undertaken by the Sind Steel Corporation.

David Haxell writes: I believe the mystery ship photographed in Table Bay is the British India Steam Navigation Company’s Ismailia, although she would appear to be on charter to a sister company James Nourse. She was launched from the William Gray yard in Hartlepool with the yard number of 1105 on 3rd September 1940 and completed in December of that year. Powered by 3-cylinder triple expansion engine built by the Central Marine Engineering Works, also of Hartlepool, she had a low-pressure turbine with a double reduction gearing and hydraulic coupling along with 4 single ended boilers and a 250ib superheater. This gave her a speed of 12 knots. She was converted to oil burning in November 1949. Her hull was built with modified scantlings for service in any part of the world. Having a gross tonnage of 6,806, a net tonnage of 4,305 and a deadweight of 8,420 tons she had 2 decks. This gave her a summer draught of 25 ft, a length of 442ft 10in and breadth of 57ft 7in. Her official number was 168047 and she had a call sign of GNRR. In 1958 she was sold to the Pan Islamic shipping company of Karachi, Pakistan and renamed Safina-E-Jamhooriyat with whom she served until November 1966 when she was broken up by the Hardware Manufacturing Corporation of Karachi after a total of 26 years of service.

Peter Harris writes: At first glance this unknown ship was a Nourse line vessel but closer examination revealed a British India house flag. She was one of a seven strong I class built by Wm. Gray, West Hartlepool apart from one at Barclay Curle, standard five hatch cargo ships mostly trading in the Far East India trade, 1938-40, 6,800 tons 13 knots Doxford diesels. Itinda and Indora (lost in war) had varnished bridge fronts and the Barclay Curle vessel, Itria, had no cowel on the funnel. That leaves Itola, Itaura, Ismaila and Ikauna. I will have a guess that she is Ismaila.

In 1959 vessel was sold to Pakistani S.N. Co. Ltd., and renamed Jahangirabad, ownership passing to the East Bengal S.N. Co. Ltd. in 1965 without name change. Vessel was broken up at Gadani Beach in 1968.

Mike Goadby writes: Between 1938 and 1941, the British India Steam Navigation Co. Ltd. had six identical cargo ships built, Itria, Itinda, Ismalia, Itola, Ikauna and Itaura, five were built by William Gray at West Hartlepool, Itria being built by Barclay Curle at Glasgow. They were powered by T 3cyl engines, all with a grt of 6,793. The vessel depicted in the December issue is the Itaura (built 1940) wearing the colours of James Nourse Ltd. The Itaura was sold to the Pakistan Steam Navigation Co. Ltd. of Chittagong and renamed Jahangiribad. She passed to the Bengal Steam Ship Co. of Chittagong in 1965. The vessel was broken up at Gadani Beach in 1969.

John Jordan writes: This ship is a mystery and more so because if has a Nourse funnel and Hain/ British India/ P&O hull markings produceing a real magpie. The ship is typical of a group of cargo ships built by Charles Connell in the 1940s for the BI/PO group, principally S.S. Itaura, S.S. Itola, and S.S. Itria. The group also acquired Nourse so that the stable consisted of the four companies mentioned. I think this ship is a BI “I” Class, maybe S.S. Itaura with a Nourse funnel, and a Hain hull coloration.The derrick posts and funnel top are unique to the class.

David J. Smith writes: The December unknown ship is one of a series of seven I-class vessels constructed for British India. I think this could be the Ismalia, built by Wm. Gray & Co. Ltd. of West Hartlepool and completed in December 1940. From the image shown it appears that she was on Nourse Line service. In 1958 she was purchased by The Pan Islamic Shipping Co. of Karachi and scrapped in 1966.

Florent Van Otterdyk writes: I think that the unknown vessel is BI’s Itria of 6,854grt, delivered in May 1940 by Barclay, Curle & Co. Ltd. The ship is seen here in under charter to the shipping company of James Nourse Ltd.

In 1958 the vessel became the Iqbalbaksh of the United Oriental Steamship Co. and arrived for scrapping under this name in June 1971 at the nearby Gadani Beach.