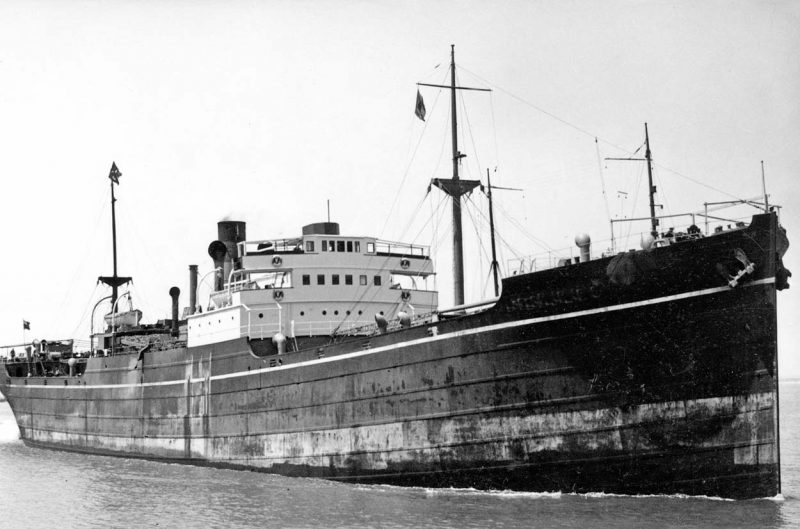 February’s unknown ship brought many replies most of whom identified her as the Peebles.

Alan Blackwood writes: This month’s ‘unknown’ is the 5,260 grt WWI Standard Type A (single deck) design steam tramp Peebles. Laid down at the Thornaby, Stockton-On-Tees yard of Richardson, Duck & Co. as War Petunia to the order of the UK Government’s Shipping Controller, she was acquired on the stocks by B.J. Sutherland & Co., Newcastle-on-Tyne and launched on 31st March 1919 as Peebles.

Completed during May 1919, she was registered to the ownership of the Isles Steam Shipping Company of Newcastle (during 1923 restyled as the Sutherland S.S. Co. Ltd.).

She was sold out of the Sutherland fleet during 1933 when acquired by D.J. Dambassis of Andros and renamed Heleni D. for continued trading under the Greek flag. During 1939 she was resold to Panamanian owners, Cia.De Vapores Portobello Ltda. and renamed Culebra. 1948 saw her onward sale to E. Szabados when renamed Renata for Italian flag operation with PoR of Venice. During 1955 her registered ownership was transferred to Angelo Ravano and renamed Valcerusa with PoR of Genoa and at which time her boiler furnaces were recorded as having been converted from coal to oil fuel. Three years later her registered ownership was further transferred to Raffaele Romano without name change but PoR now shown as Naples. During 1959 she was broken up at Yokohama.

John Jordan writes: Rather difficult one to clearly decipher. She has all the hallmarks of a Wartime Standard ship-B type from WW1. I am of the opinion, due to white line position on the hull, and it’s thickness, that it is in Brocklebank Livery.

The ship in mind started out in 1919 as War Gorse and then renamed War Genista on Launch. She was acquired by T.J. Brocklebanks in 1920 as Mandasor. In 1941 while on passage Calcutta to Liverpool she was attacked by an aircraft from German raider Atlantis . She was bombed and set on fire. She sank near the Seychelles in 04º18’S , 61º00’E.

She was completed in May 1919, the first owner being Isles Steam Shipping Co. Ltd. (B.J. Sutherland & Co., Newcastle). In 1923, the owners became the Sutherland S.S. Co. Ltd. (same managers). The ship was sold in 1933 becoming the Heleni D owned by D.J. Dambassis of Andros. Sold again in 1939 to Cia de Vapores, Portobello, Panama she became the Culebra. In 1948, she moved to Italian owners, E. Szabados of Venice as the Renata and in 1955 to Angelo Ravano of Genoa becoming the Valecerusa. In 1959, she was sold to Raffaele Romano of Naples without a change of name. Finally, in 1959, after 40 years of service, she was broken up in Yokohama.