maritime and naval history of Britain. British naval fleets set sail from here to make the country the most powerful seafaring nation in the world. The interesting museums and preserved warships at Portsmouth Historic Dockyard help to maintain the maritime atmosphere and traditions of the past.

In this article we look at the commercial part of Portsmouth Harbour. The Continental Ferry Port opened in 1976 and has grown into a major Cross Channel passenger, ro-ro freight and trailer port. It is situated close by two other cargo wharves, Albert Johnson Quay and Flathouse Quay. Isle of Wight passenger and car ferries leave from two points in the lower harbour, close to the eye catching white sail design of the Spinnaker Tower. 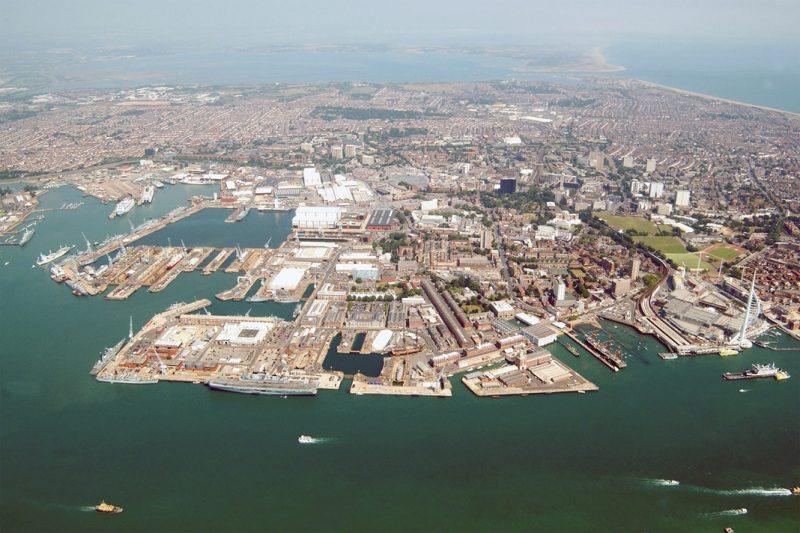 Portsmouth was awarded its Royal charter in 1194 and the first ships docked in the town in 1212. The first naval dry dock in the world was completed during the Tudor period, and the Round Tower, originally a wooden fort, at the entrance to the harbour was rebuilt by Henry VIII in white stone in 1415 with Southsea Castle completed in 1527. The vice flagship of the fleet, Mary Rose, was completed at Portsmouth and foundered off Southsea Castle in 1545 with the loss of five hundred lives. She was raised in 1992 and her remaining timbers have been subjected to a long period of spraying under controlled conditions to preserve them for posterity.

On 13th May 1787, the first fleet of ships sailed from Portsmouth Harbour with British convicts for Botany Bay and Port Jackson (Sydney). H. M. The Queen two centuries later unveiled a memorial on 11th July 1980 consisting of two steel links on a stone plinth near the Round Tower, with another similar memorial unveiled at Sydney (NSW). Admiral Horatio Nelson sailed from Portsmouth for the first time in 1805 to command the Royal Navy fleet that defeated the larger combined fleets of Spain and France at Trafalgar. A network of forts was built around Portsmouth to make it a heavily defended naval base and city, as the defence of England depended on the Royal Navy.

The medieval naval base was extended northwards from 1843 onwards to create No. 2 Basin of seven acres water area, with three new dry docks constructed over the next twenty years. The ‘Great Extension’ of Portsmouth Dockyard was largely completed by 1881, and further expansion created the big numbers 14 and 15 dry docks in 1896. A much larger body of water was then enclosed as No. 3 Basin with a pair of 850 feet entrance locks (C and D Locks) operational by 1914. The huge area of Portsmouth Naval Base has remained in use ever since to their original design and largely unchanged during the last century. The gun turret workshop (1881), torpedo workshop (1886), and the fitting out area to the east of numbers 12 and 13 dry docks (1905) enabled Portsmouth Dockyard to build large warships e.g. Dreadnought battleships. A large power station of 9,800 megawatts power was opened in 1906 to provide enough electrical power for the largest naval base in the world.

This Month's Port of Call is Portsmouth