Portland is the largest port in New England as well as the second largest oil port (until 2016) on the whole of the Eastern Seaboard stretching down to Florida. The main oil pipeline up to Montreal from Portland had a throughput of 150 million barrels of oil per year or 19.0 million metric tonnes per year. In addition, every year 5.5 million tonnes of minerals, 4.4 million tonnes of grain, and one million tonnes of breakbulk cargo are handled, together with 250,000 cars, trucks and lorries. There are eleven major terminals in the port including four handling crude oil and petroleum products, and container traffic is also handled but is small at a total of only 105,500 metric tonnes handled in 2015. This is a very well planned port built on a peninsula jutting out into Casco Bay, with the piers facing south east. The atmospheric Old Port district fronts Commercial Street with Victorian stone warehouses still in use for cargo, but with some transformed into restaurants and shops.

Portland (Maine) is located on a hilly peninsula surrounded on three sides by the water of Back Cove, Casco Bay and the Fore River. The Portland peninsula began habitation by Europeans as a settlement called Casco in 1632, renamed Falmouth in 1658, but it was completely destroyed by raids of Native Americans in 1676. After rebuilding, the French attacked the town in 1690, but again it was rebuilt, and the community flourished until an English fleet bombarded the town in 1775 as a punishment for supporting the independence movement. The town was rebuilt and renamed Portland in 1786, and the busy port had eighty years of quiet commerce until it was completely destroyed again in the Great Fire of 4th July 1866 during big firework celebrations on American Independence Day. It was rebuilt again, and today it reflects the development of a great city and port made by provincial citizens, with the town motto of ‘Resurgam’ (Rise Again) and the town symbol of the ‘Phoenix’ as in ‘Rising like a Phoenix from the Ashes’.

The great American poet and writer Henry Wadsworth Longfellow (1807-1882) was born and grew up in the town, and in his poems he always described the town of his birth in glowing terms and as the largest town in the State of Maine. He grew up in a house built in 1785 by his grandfather General Peleg Wadsworth, a hero of the Independence Revolution and a Maine State Senator. The house was built of bricks shipped in from Philadelphia, and from an auspicious start Longfellow went on to become the best loved poet of 19th century America, some of his best works included ‘The Golden Legend’, ‘Songs of Hiawatha’, ‘Paul Revere’s Ride’, and the ‘Battle of Lovell’s Road’. The latter poem appeared in the Portland Gazette when he was only twelve years of age. Longfellow was the first American to be commemorated with a bust in Poet’s Corner in Westminster Abbey. His childhood flute is on display in a museum in the town dedicated to his memory, along with family mementos, portraits and furniture that he treasured. 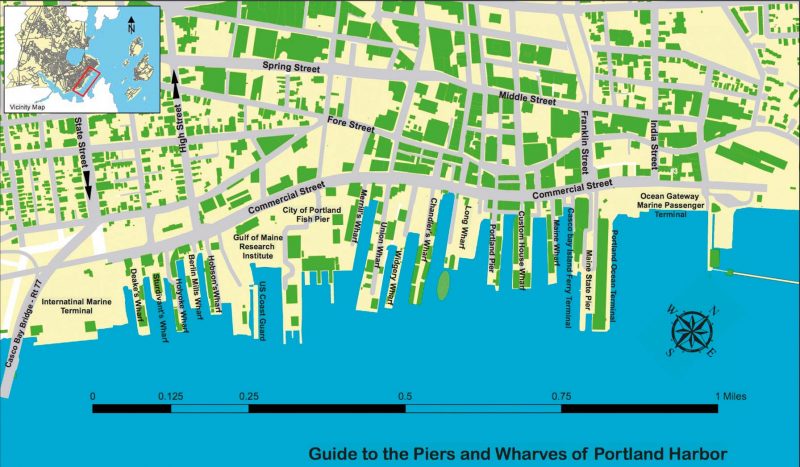 The location of the Port of Portland (Maine) is on the Fore River with magnificent views of Casco Bay, and the Calendar Islands and Peaks Island. The lighthouse at Portland Head Light at Fort Williams Park is surrounded by beautiful parkland only four miles from the centre of the city. The light was first illuminated in 1791 by order of President George Washington (1732-1799), and has been illustrated on many U.S.A. postage stamps and photographs. The keeper’s house is now part of a lighthouse museum with a worldwide photograph exhibition of lighthouses. The main shipping channel into Portland harbour is the deep water entrance between Cushing Island to the east and the shore at Portland Head to the west. There are also several other entrances between the offshore islands used by small, local ferries and craft. A ledge of rock exists in the vicinity of Cape Elizabeth to the south of the port, but is well marked by navigation aids.

In addition to Halifax (NS), Portland (Maine) became a winter ice free port alternative to the ports of Montreal and Quebec, and grew as a great railway hub northwards into Canada. Commercial fishing, shipbuilding and the immigrant trade of passengers from Europe, as well as cargo from around the world, ensured its success by the end of the Victorian era. The narrow streets of the old port today are still lined with large stone Victorian buildings that were once busy warehouses, shipowner’s offices and ship’s chandleries. Excursion boats take tourists for harbour cruises, as well as fishing trips or sea kayaking to the many islands in the bay e.g. Calendar Islands and Peaks Island. The Seamen’s Club in the old port has a decorated double fronted Gothic arched window to its upper storey, and was built after the devastating fire of 1866. The church where they worshipped was built in 1828 in the ‘Greek Revival’ and ‘Federal’ styles, topped by an enormous stone pediment. Commercial Street runs immediately behind the piers of the port, and includes classic white stone buildings such as the U.S. Custom House built during 1861/65 and opened at the end of the Civil War. The magnificent interiors include golden ceilings, marble staircases, gilded ornaments and high crystal chandeliers.