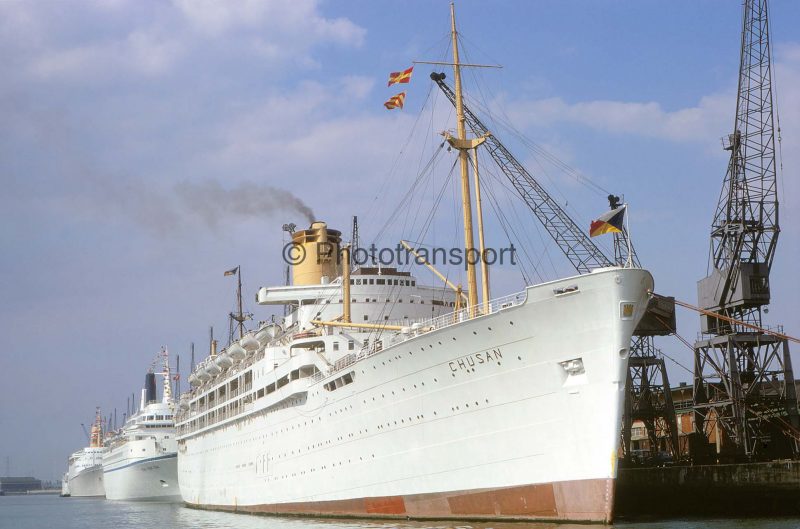 A scene in the Western Docks at Southampton on 1st September 1972. In the foreground is P&O’s 24,215grt Chusan, behind her is the 21,848grt Royal Viking Star of Royal Viking Line, and at the rear is Norway American Line’s 24,002grt Sagafjord.

The Chusan was built in 1950 by Vickers-Armstrongs at Barrow. On 1st July 1973 she arrived at Kaohsiung to be broken up by Chou’s Iron & Steel.

The Royal Viking Star was built in 1972 by Warsila at Helsinki. In 1981 she was lengthened by 27.7 metres. In 1990 she moved to sister company Kloster as Westward. In 1994 they renamed her Star Odyssey, and in 1996 she moved to Fred. Olsen as Black Watch and she sails as such today.

The Sagafjord was built in 1965 by Méditerranée at La Seyne. In 1983 Trafalgar House acquired Norwegian American and the Sagafjord, together with her sister Vistafjord, were transferred to Cunard Line. In 1996 she was chartered to Transocean Tours as Gripsholm and the following year she joined Saga Cruises as Saga Rose. On 29th May 2010 she arrived at Jiangyin to be broken up.

This month's photo features the Chusan