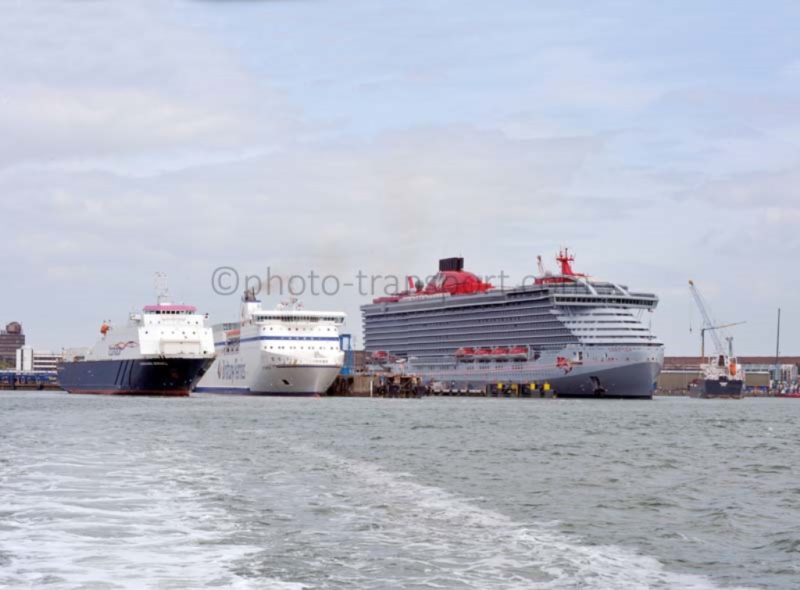 A busy day at Portsmouth in August 2021. From left to right are Condor’s Commodore Goodwill, the Cap Finistere of Brittany Ferries, Virgin’s cruise ship Scarlet Lady and the bunkering tanker Whitonia of Whitaker Tankers.

The 11,166gt Commodore Goodwill was built in 1996 by Royal Schelde at Flushing and operates on the Ro-Ro service from Portsmouth to Guernsey and Jersey.

The 32,728gt Cap Finistere was built in 2001 by Howaldtswerke-DW at Kiel as the Superfast V for Superfast Ferries’ service from Bari to Corfu, Igoumenitsa and Patras. She joined Brittany Ferries as Cap Finistere in 2010 and currently operates on the Portsmouth to Bilbao route.

The 108,192gt Scarlet Lady was built in 2020 by Fincantieri Italiani at Sestri Levante. In August 2021 she operated a series of cruises from Portsmouth before relocating to her New Jersey base on 3rd September 2021.

The 7,511dwt tanker Whitonia was built in 2007 by Dubai Dry Dock. She divides her time between Portsmouth and Southampton on bunkering duties.