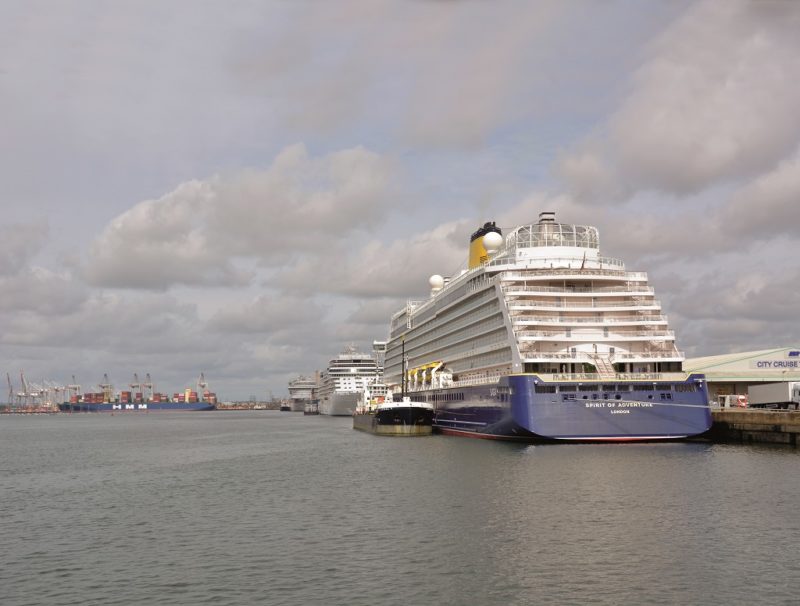 Another busy day in Southampton’s Western Docks on 21st May 2022 with eight ships on view. From left to right are the 152,003grt HMM Gaon of Hyundai Maritime, the 1,792gt Shieldhall of Solent Steam Packet Ltd., P&O’s 116,017gt cruise ship Ventura with the 4,450dwt bunker tanker Whitchallenger of Whitaker Tankers alonside, the 56,182gt Seven Seas Splendor of Regent Seven Seas Cruises with the Seagreen alongside, and the 58,119gt Spirit of Adventure of Saga Cruises being bunkered by the Whitaker Tankers’ 2,901dwt tanker Jaynee W.

The HMM Gaon was built in 2021 by Hyundai at Ulsan.

The Shieldhall was built in 1955 by Lobnitz at Renfrew as an effluent tanker for Glasgow Corporation. In 1989 she was acquired by Solent Steam packet Ltd. after an extensive refit she now operates pleasure cruises in the Solent area.

The Spirit of Adventure was built in 2020 by Meyer Werft at Papenburg. She is being refuelled by the Jaynee W. which was built in 1996 by Yorkshire Dry Dock at Hull.