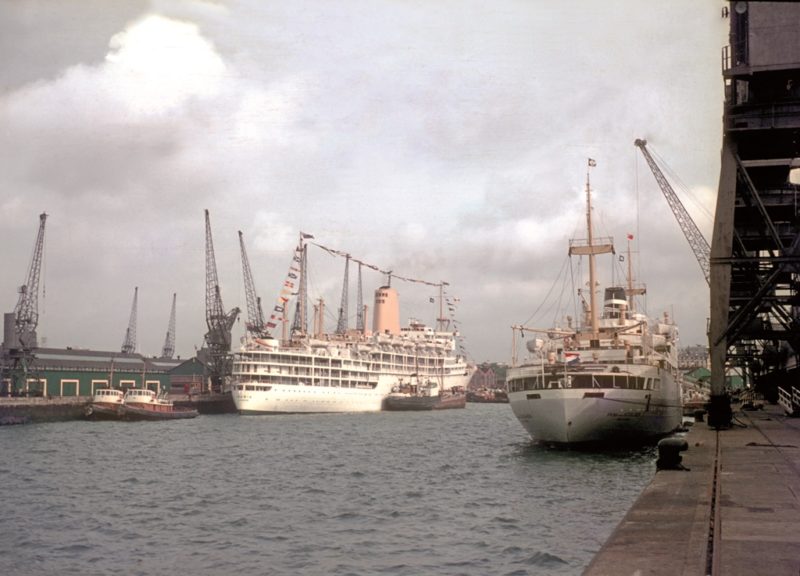 Southampton in September 1968. From left to right are the two Alexandra Towing tugs Ventnor and Brockenhurst, P&O’s cruise liner Iberia being bunkered by the Esso Lyndhurst and the passenger-refrigerated cargo vessel Prins der Nederlanden of Royal Netherlands Steamship Co.

The 173grt Ventnor was built in 1965 by Dunstons at Hessle. In 1993 she was sold to Ward Tugs of Ireland and renamed Sea Vigilant. She is still in service. The 173grt Brockenhurst was built in 1964 by Dunstons at Hessle. On 25th November 1984 she sank at her berth in Wellington Dock, Liverpool. She was raised on 9th December and sold to Sammy Evans and Sons at Garston to be broken up, arriving there on 28th January 1986. The 29,614grt Iberia was built in 1954 by Harland & Wolff at Belfast. On 5th September 1972 she arrived at Kaohsiung to be broken up by Tung Chen Steel Corporation. The 1,300dwt Esso Lyndhurst was built in 1956 by Scarr at Hessle. In 1980 she was sold to Saudi Bunkering Transport of Saudi Arabia and renamed Bunker I. On 4th March 1988 she arrived at Gadani Beach to be broken up by World Marine Shipping & Trading. The 7,221grt Prins der Nederlanden was built in 1957 by P. Smit Jr. at Rotterdam. In 1972 she was sold to Empresa de Nav. Mambisa of Cuba and renamed Vietnam Heroico. On 1st October 1984 she capsized at her berth in Havana and was subsequently broken up by SIPSA at Mamonal, Colombia.

Our photo of the month was taken in Southampton in September 1968.