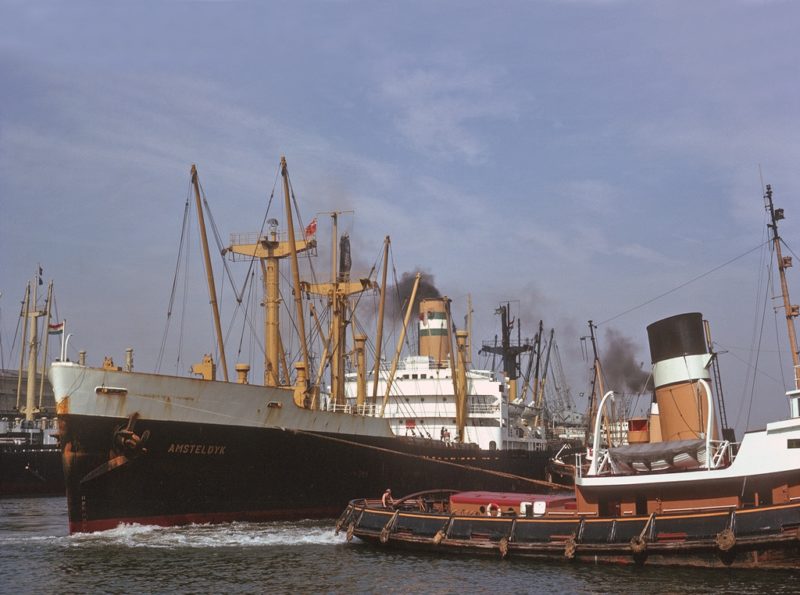 Built as successors to the wartime standard Liberty ships the Victory ships which first appeared in 1943 were faster and larger and powered by steam turbines which developed some 6,000hp giving a 17 knot capability. There were three basic variations of the Victory type which eventually numbered 531 ships.

After the war many of the Victories were sold into commercial service and the Holland America Line bought 12 of the type for its general cargo operations. The first had been launched in 1943 as the 7,612grt Panama Victory by the California Shipbuilding Corp. Inc. at Terminal Island, Los Angeles for the U.S. War Shipping Administration. She was sold to the Dutch company in 1946 and renamed Amsteldijk. In 1954 they changed her spelling to Amsteldyk. Here she is assisted by the Alexandra Towing tugs North Light and Salthouse in Canada Dock, Liverpool on 2nd September 1964. Amsteldyk was sold in 1967 to Progressive Mariners S.A. of Panama and renamed Helena. The following year she was transferred to the Sincere Navigation Corporation Ltd. of Keelung, without changing her name. On 6th March 1973 she arrived at Kaohsiung to be broken up by Chun Yuan Steel Corporation.

The 206grt North Light was built in 1956 by George Brown & Co. at Greenock. In 1972 she was sold to Rimorchiatori Sardi SpA of Cagliari and renamed Caprera. She was deleted from the register in July 2001.

Our Photo this month shows a Victory ship