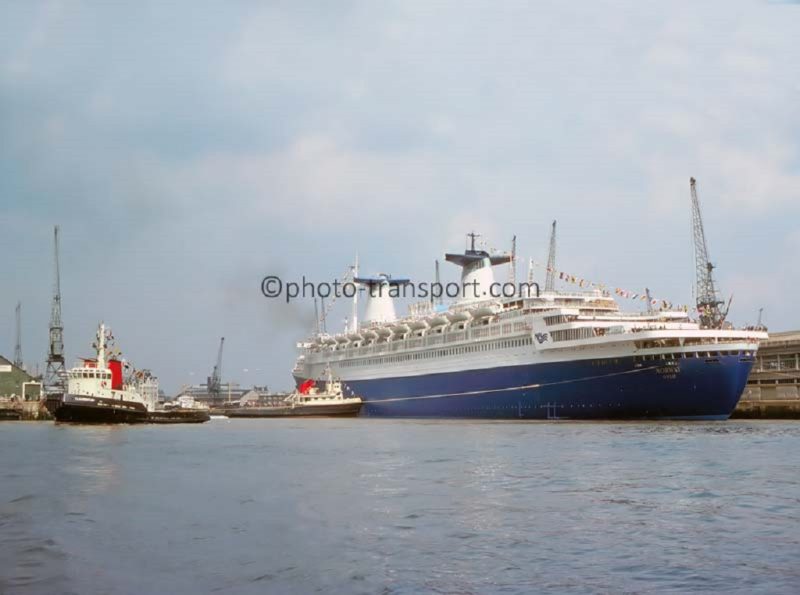 The Norway docking in Southampton on her maiden voyage for Kloster on 7th May 1980. She is being assisted by the Red Funnel Line tugs Clausentum and Canute, Docked in the far background is the suction dredger Sand Lark of South Coast Shipping.

The 66,348grt Norway was built in 1961 by Chantiers de l’Atlantique as the France for Compagne Generale Transatlantique. She joined Kloster in 1979. In 2006 she was renamed Blue Lady for her final voyage to Alang where she arrived on 30th June to be broken up by Haryana Shipbreakers.

The 334grt Clausentum was completed in January 1980 by Richards (Shipbuilders) Ltd. at Lowestoft. In 1993 she was sold to Londonderry Port Harbour Commissioners and renamed Strathfoyle. In 2003 she was sold to Svendborg Bugserselskap A/S of Denmark and renamed Westsund and she is still in service for them.

The 493grt Calshot was built in 1964 by John I. Thornycroft at Woolston. In 1989 she was sold to Dublin Bay Cruises and renamed Tara II and in 1992 she moved to Remolques del Mediterraneo SA of Valencia and was renamed Boluda Abrego. On 17th April 2012 she arrived at Aliaga to be broken up by Izmir GS.

The 540grt Sand Lark was built in 1963 by J. Bolson & Son at Poole. In 1991 she was sold to Sunwood Shipping of St. Vincent and renamed Sand Martin. In 2001 she was sold to Caminhos Submersos Actividades of the Azores and renamed Dragacor. She is still in service with them.

Our photo this month is The Norway docking in Southampton, complementing our article on Knut Kloster.