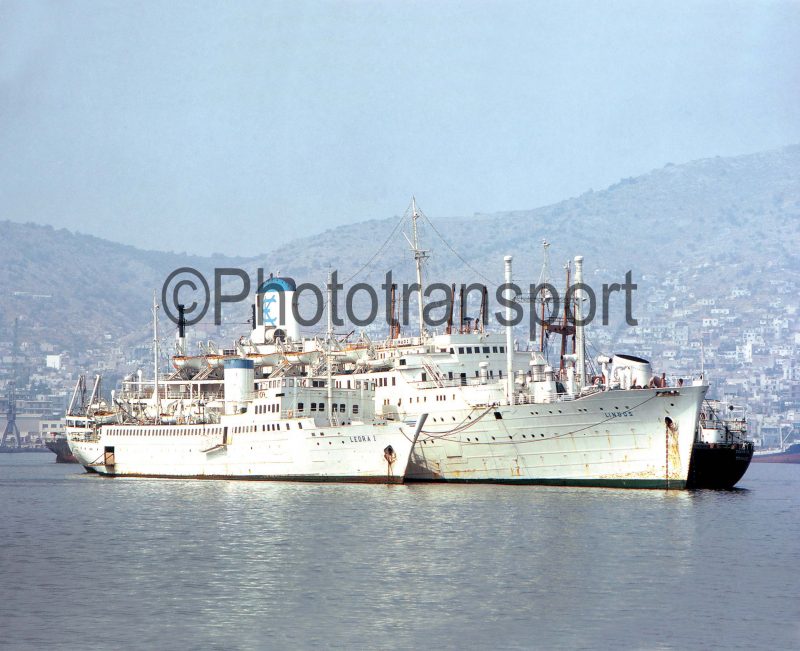 Perama Bay was a popular place to see ships laid up in the 1960s and 1970s. Here we see three ships in lay-up on 19th May 1973. From left to right are the ferries Ledra I and Lindos and behind the Lindos is the liquid gas tanker Socrates.

The 1,434grt Ledra I was built in 1933 by Nakskov Skibsværft A/S as the Jylland for the Danish State Railways for the Aarhus to Kalundborg service. In 1966 she was sold to Efthymiadis Lines of Famagusta, Cyprus and renamed Ledra I. In 1975 she was renamed Dianita but it is doubtful if she ever entered service under that name. She was deleted from the register in 1986.

The 9,831grt Lindos was built in 1952 by Mediterranee at La Seyne as the Lyautey for Cie. de Nav. Paquet of Marseilles. In 1965 they briefly renamed her Galilee before she reverted to Lindos in 1966. In 1968 she joined Efthymiadis Lines as Lindos. On 17th February 1974 she arrived at Castellon to be broken up by I. M. Varela Davalillo.

The 1,082grt Socrates was built in 1954 by Normand at Le Havre as the freighter Cantenac for Worms & Cie. In 1961 she joined Gazocean SA, renamed Marcelin Berthelot and was converted into a liquid gas carrier. In 1968 she became Socrates of Antarctic Gas Incorporated. She was broken up in 1981.