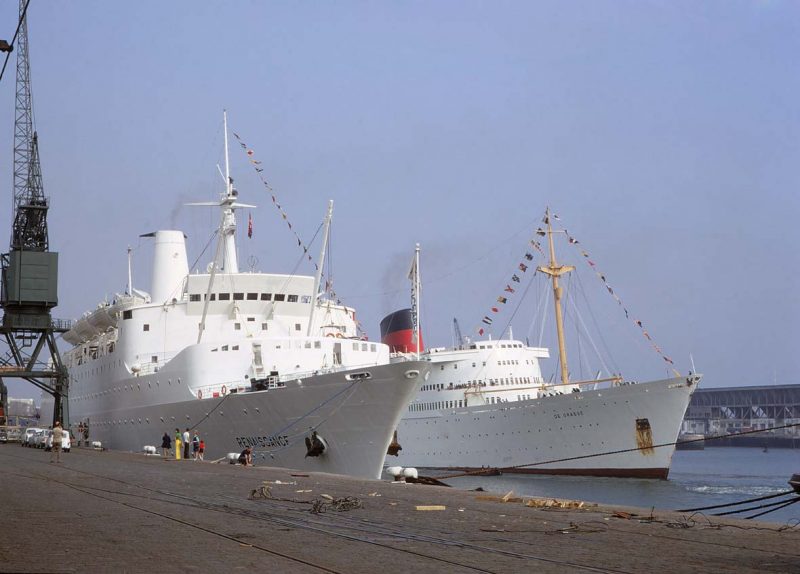 Le Havre in the early 1970s. On the left is the 11,724grt Renaissance of Nouvelle Cie. des Paquebot’s subsidiary Cie. Francaise de Navigation. She was built in 1966 by Chantiers de l’Atlantique at St. Nazaire. In 1977 she was sold to Epirotiki Lines and renamed Homeric Renaissance and in 1978 she was chartered to Costa and became World Renaissance and in 1995 she was chartered to Club Awani as Awani Dream. In 1998 she joined Royal Olympic Cruises reverting to the name World Renaissance. Following their bankruptcy in 2004 she was sold to Elysian Cruises and renamed Grand Victoria. In 2007 she moved to Majestic International Cruises as Blue Monarch. In 2010 she was renamed Maestro for her final voyage to Alang where she arrived on 6th August to be broken up.

On the right is the 18,739grt De Grasse of Compagne Generale Transatlantique which was built in 1956 by Swan, Hunter & Wigham Richardson at Wallsend as the Bergensfjord for Norwegian America Line. In 1973 she was sold to Thoresen & Co. & Bruusgaard Kiosterud & Co. of Singapore and renamed Rasa Sayang and in 1980 she joined Sunlit Cruises of Cyprus as Golden Moon. In 1980 she was sold to Aphrodite Maritime and reverted to Rasa Sayang. On 27th August 1980 she caught fire at Perama while being refitted for her new owners. She was towed to Kynosoura where she capsized and sank.