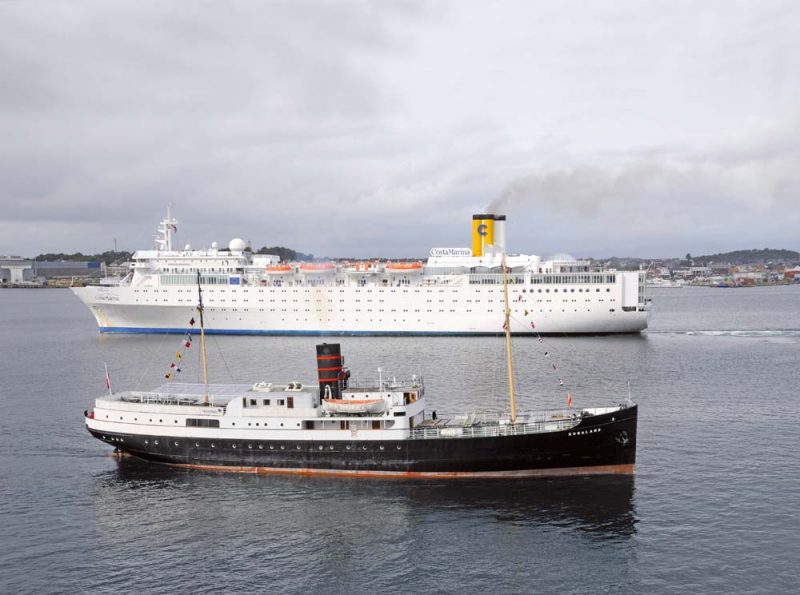 Stavanger on 17th June 2011. Inward bound is the the 902grt Rogaland which was built in 1929 by Stoberi at Stavanger for Det Stavangerske D/S A/S. They renamed her Tungenes in 1964 and the following year she was sold to A/S Nika Invest and renamed Stauper. In 1990 she moved to Stiftelsen Veteranskibslaget Rogaland as Gamle Rogaland before reverting to her original name in 2002. She became a film star in 2018 as the hospital ship in the film ‘Dunkirk’.

Outward bound is the 25,441gt Costa Marina of Costa Crociere. She was built in 1969 by Wartsila at Turku as the container ship Axel Johnson for Johnson Line of Stockholm. In 1986 she joined Regency Cruises and was converted into a cruise ship. After that company’s demise in 1987 she joined Navy Club Italia Srl as Italia and in 1990 she moved to Costa. In 2011 she was sold to Harmony Princess Ltd. of South Korea and renamed Club Harmony. In 2014 she was renamed Harmony 1 for her final voyage to the breakers at Alang where she arrived on 20th October to be dismantled by MK Shipping & Allied.