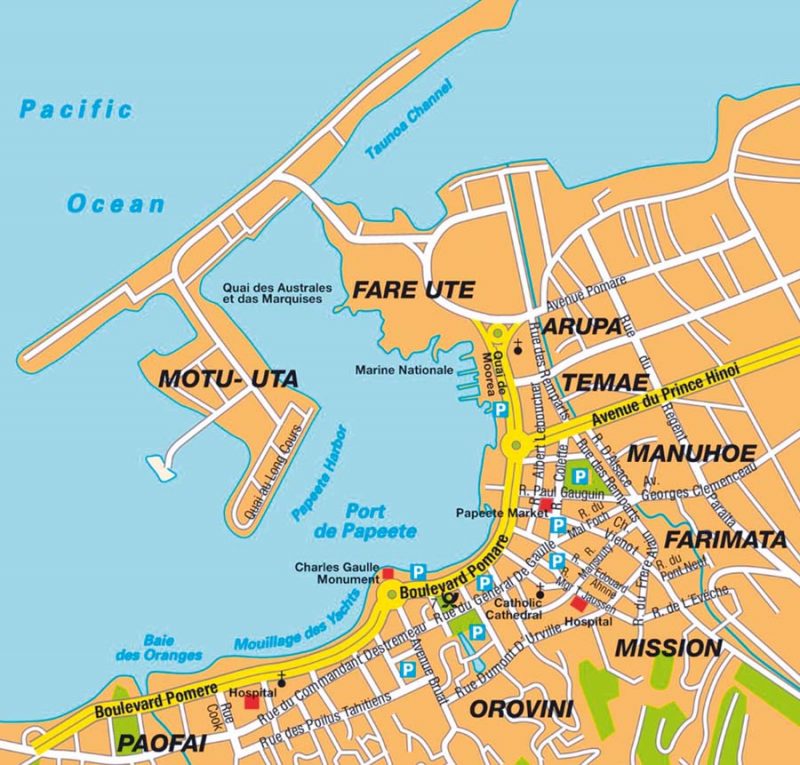 Papeete is the capital of Tahiti, the largest island in French Polynesia, which has been an overseas territory of France since 1958. French Polynesia consists of around 130 tropical islands scattered over 1.5 million square miles of the Central South Pacific. The islands are in six groups: the Windward Group including Tahiti, the Leeward Group, the Tuamotu Group, the Gambier Group, the Austral Group and the Marquesas Islands. The total land area of the six groups is 1,544 square miles, with Tahiti being 403 square miles in area and 28 miles across at its widest point. Tahiti is shaped like a ‘Figure 8’ with the largest western part of Tahiti Nui (Big Island) and the eastern peninsula of Tahiti Iti (Small Island). The island has beautiful white sandy beaches, lush rainforests, many waterfalls including the Fautaua Falls near Papeete, and two extinct volcanoes. The south eastern part of Tahiti Nui remains remote and isolated today, with only a narrow ribbon road running around parts of the coast of the island.

The even more beautiful island of Moorea with high strange shaped extinct volcanoes lies fifteen miles due west of Papeete. Tahiti was originally settled by Polynesians from 300 BC, who explored the two islands and gave the name of Taravau to the short connecting strip between the two parts of the island of Tahiti. The population of Tahiti is today three quarters Polynesian, with the rest being Chinese, mixed race, and French. Capt. James Cook arrived on Tahiti in 1769 to find the Polynesians sailing big outrigger canoes of thirty metres in length, which could transport whole families and their domestic animals. The practice of human sacrifice among the Polynesians was repugnant to the British seafarers of Capt. James Cook. The early European explorers usually rounded Cape Horn and then sailed with a following wind to the ‘big’ island of Tahiti, whose longitude was known and could be reached with some accuracy by the new chronometers of that period.

French Polynesia thus comprises several scattered and widely spread out groups of islands lying two thirds of the way between Panama and New Zealand. The Windward Islands of Tahiti and Moorea, and the Leeward Islands (Iles Sous le Vent) lying 160 kilometres to NW of Tahiti, form the main Society Islands group, along with the Tuamotu Archipelago of eighty atolls, the Marquesas Archipelago lying 1,450 kilometres to north east of Tahiti, and the Gambier Islands lying 1,600 kilometres to south east of Tahiti. In total, there are 35 islands and 83 atolls in French Polynesia, of which 76 are inhabited. The total land area of French Polynesia of 1,544 square miles is not much compared to the 64 million square miles of the Pacific Ocean. The highest point on Tahiti is Mount Orahena, but most of the population of 78,000 live in Papeete. The native population when the French and British first arrived was actually higher at 100,000, but disease carried by the white man soon decimated this figure to only six thousand.

The main port of Port Autonome de Papeete on Tahiti is where the CMA CGM and Marfret container and multi-purpose vessels call on their service to Noumea on New Caledonia and onward to Australian and New Zealand ports. The last Bank Line vessels called here in September 2009 and used the same berths as the CMA CGM and chartered Marfret vessels use today to load copra, sugar cane, mother of pearl, coffee and vanilla. The Passenger Terminal (Gare Maritime) is used by 1.6 million inter-island passengers from Moorea (15 miles across the Sea of the Moon), Bora Bora, Tahaa and Raiatea, and by fifteen inter-island ferries including the car ferries and high speed catamarans of Aremiti Ferries. There are around ten thousand international cruise passengers annually. A total of two million tonnes of cargo and 70,000 TEU of containers are handled annually at the cargo port zone of Motu Uta. Papeete lies at the north west corner of Tahiti Nui, which has a narrow connection to the smaller island of Tahiti Iti. Tahiti is a gorgeous cruise and holiday destination with white sandy beaches, turquoise lagoons, and many high vertical waterfalls.

This French Polynesian port is our feature this month