Newbuild of the Month 10th November 2020

Odin of Scapa and Thor of Scapa – December 2020 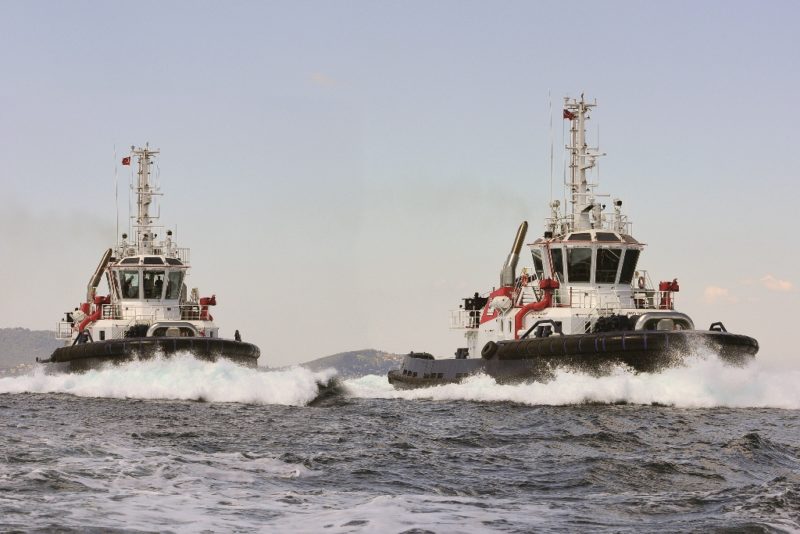 Scapa Flow is a famous body of water in the Orkney Islands that takes its name from the Old Norse word Skalpaflói, meaning “bay of the long isthmus.” The area is sheltered by the islands of Mainland Orkney, Graemsay, Burray, South Ronaldsay and Hoy. The very nature of Scapa Flow has meant that it has played an important role in travel, commercial shipping and conflict throughout the centuries. Scapa Flow was a major base for the Royal Navy during the First and Second World Wars, but the facility was closed in 1956. The anchorage has a maximum depth of 60m, with most of it being 30m, and covers an area of 125.3 square miles (324.5km2) placing it in the ranks of the great natural harbours of the world. Scapa Flow hosts an oil port, the Flotta Oil Terminal. Ship-to-ship transfers of crude oil products also take place whilst the world’s first ship-to-ship transfer of LNG took place here in 2007. On 17th August 2017 the Repsol-Sinopec Flotta Oil Terminal celebrated 40 years of service having opened in 1977. The terminal’s story began in 1973 when Occidental North Sea Group selected the site as landfall for its newly discovered Piper oil field, 125 miles east of Caithness. Flotta, an island on the edge of Scapa Flow, was selected ahead of seven other possible locations and became the terminal’s home. The facility, which covers about one sixth of the island, was inaugurated 4 years later and was expected to operate for about 15 years. Over the 40 years, the terminal has processed North Sea oil at the rate of 100,000 barrels per day on average. The terminal has changed hands a number of times and is expected to be operational until around 2030. Flotta has been fed with oil from several fields including Claymore, Scapa, Piper, Tweedsmuir, Tartan, Highlander, Duart, Petronella, and Galley. In 1979, Flotta welcomed 226 tankers to the terminal, the largest number it has ever received in a year. The terminal received a new lease of life when it started processing reserves from the Nexen-operated Golden Eagle field in 2014.

Locations such as the Flotta Oil Terminal generally have an allocation of tugs and Orkney Towage Company Ltd. was formed on 21st April 1976 primarily to provide towage services for the then Occidental Oil Terminal on Flotta. Since this time, the Towage services, now a division of Orkney Islands Council Marine Services, have continued to maintain a tug fleet here. The tug’s duties include assisting in the berthing and sailing of oil tankers and gas tankers from the Jetty and Single Point Mooring operated now by Talisman Sinopec (UK) Ltd. plus the berthing and sailing of oil tankers involved in Ship-to-Ship operations and escort duties for oil tankers arriving and departing Scapa Flow. Flotta’s Towage Service operation is a signatory to the CAST agreement (Coastguard Agreement for Salvage and Towage), and under the CAST agreement the MCA may call upon their services (subject to availability) to assist in salvage operations where a vessel is in danger of causing pollution, danger to other shipping or to assist in counter pollution duties. On occasions when the service of a tug is not required in Scapa Flow, Towage Services are available for third party usage within the area of the North of Scotland. In 2003, Towage Services achieved full compliance with the requirements of the International Safety Management Code (ISM code). In recent years, Towage Services has played a major part in the installation of Renewable Energy Devices in Orkney. The installation of the Openhydro tidal device at the Falls of Warness and the further installation of the EMEC wave testing device on Orkney’s west coast demonstrated the versatility and experience of the towage crews at their best.

In 2019 the Orkney Islands’ Towage Services towage fleet consisted of the 410gt/1989-built Einar, 410gt/1990-built Erlend and the 411gt/1992-built Harald. All three tugs are named after Earls of Orkney, namely Einar Sigurdsson, Erlend Thorfinnsson and Harald Maddadsson. The trio are 4,000hp tugs with twin “Aqua-Master” azimuth stern drives, a 55t bollard pull and Oil Pollution Response capability. Each tug is also able to tow loads in excess of 120 tonnes. By this time the tugs ranged from 28-30 years old so, considering the tasks that they are expected to undertake, it was time to upgrade the fleet to a modern design and to modern standards of safety, stability and operational capability. So, on 13th February 2019 a contract was signed for two new tugs for Orkney Islands Council’s Marine Services at a cost of £6.1m each. The design and build contract for the 32-metre tugs was secured by Sanmar Shipyards of Turkey at the conclusion of the tender process, using Canadian Designer Robert Allan Limited’s RAstar 3200SX design. Robert Allen Ltd. was founded in 1930 when Robert Allan commenced private practice as a consulting Naval Architect after serving as Technical Manager of a local major shipyard. A 1907 graduate naval architect from the University of Glasgow, he was responsible for numerous enduring designs produced for the growing British Columbia fishing fleet and coastal ferry services, among others. Robert F. (Bob) Allan joined his father in the practice in 1945. The business grew steadily and was instrumental in the development of specialised tugs and barges. In 1973, Robert G. (Rob) Allan joined the company, following the family tradition. In 1981 he succeeded his father as President. With significant growth since the mid 1990’s the firm has established itself as an international force in commercial working craft design and, nowadays, a vessel is built to one of the designs somewhere in the world almost every week. Sanmar Shipyards has two facilities in Tuzla and Altinova and was founded in 1976 by Orhan Gürün and Gökҫen Seven. It remains a privately operated firm and, in July 2013, the firm completed its 100th tug. The Altınova Shipyard went into production in 2015 and is situated in Yalova. The facility covers approximately 50.000m² in total of which 21.400m² comprises a covered and closed production area. With its larger capacity this modern facility is designed to construct larger and more sophisticated vessels like AHTSs, PSVs, offshore construction vessels and vessels using alternative fuels like LNG, as well as the extensive portfolio of tugs which the shipyard already has a fine reputation for. The keels were laid for the newbuilds on 25th April 2019 at the new specialist tug building facility, all of which is undercover, at Altinova, about an hour south of Istanbul.

From Rivers to Gods

The RAstar 3200-SX design is a new class of tugs from Robert Allen Ltd. and Sanmar, dubbed the Kocaçay series, taking the name from a large river in Turkey. The newbuilds for Orkney Islands Council Marine Services are the first of the RAstar 3200-SX type, purposely designed with a shallower draught than other comparable high-performance escort tugs and incorporate considerable input and collaboration with Sanmar. The RAstar 3200-SX escort/ship-assist tugs are a twin Z-drive, diesel-powered vessel, designed for the performance of ship-handling, towing and escort duties.

The escort tug is equipped for operations over the bow and stern, with a powerful DMT escort winch at the bow for escorting and ship handling operations, and a DMT towing winch, Macgregor Triplex guide towing pins and rounded transom at the stern for towing. As an example of the flexibility to allow for future owner requests the tug class was designed to satisfy all applicable Rules and Regulations of both Bureau Veritas (BV) and Registro Italiano Navale (RINA) for an escort and Fi-Fi 1 tug.

Ship-handling fenders at the bow consist of one tier of 900mm OD x 550 ID cylindrical fender at the main deck level, with 48-30 W fenders between the raised forward deck and the knuckle. Hollow 300 x 300 “D” fender provides protection at the main and forecastle sides and sheer lines, and 48-30 W type fendering is used at the stern. The MLC 2006 compliant accommodations have been outfitted to a high standard for a maximum crew of 6-8 with cabins above the waterline and fitted with means of attaining natural light. The deckhouse contains an entrance lobby, the galley, mess, two officer cabins with ensuite WC, and a laundry. The lower deck contains one plus one double berth cabins with shared WC and two single officer cabins with ensuite WC. The wheelhouse is designed with a single split control station which provides maximum all round visibility and exceptional visibility to the bow and side fendering. The engine room features an acoustically isolated switchboard room. On trials, the Odin of Scapa and Thor of Scapa met or exceeded all performance expectations. On 16th December 2019 came the news that the new tugs would be called Odin of Scapa and Thor of Scapa. The names are a link to Norse mythology as Odin is the god of wisdom, poetry, death, divination, and magic whilst Thor is the god of thunder and lightning, associated with strength, storms, hallowing and fertility. The names were chosen following a public vote with people being asked to cast their vote for four groups, each containing three names. In all, 566 votes were cast, with 315 of them for the group containing the names Odin, Thor and Vale. The name Vale of Scapa will be held in reserve and used if the council decides in the future to replace the third tug as well. A winner was drawn from the votes for the most popular group of names. Isobel Thompson from Westray was subsequently invited to take part in the naming ceremony for Odin of Scapa and offered the opportunity of a family trip aboard the new tug. That was of course prior to the Covid-19 pandemic turning our daily routines upside down, but the naming ceremony went ahead on 12th October.

Delivered to a Different World

Initially the Odin of Scapa was due for delivery in May 2020 and the Thor of Scapa was, when the Odin was launched in late February, declared as ahead of schedule and 2 months behind her sister.

However, Covid-19 tightened its grip across Europe from March, bringing normal life pretty much to a halt. Establishments such as shipyards quickly revised working practices and resumed operations in a limited capacity but, understandably, delivery schedules slipped. There was no announcement relating to the launch of the Thor of Scapa (originally due April 2020) with all online searches coming up with Odin of Scapa only. Anyway, both tugs were completed and sea trials undertaken.

Both set off for their new home on 29th August and reached Orkney 17 days later on 15th September after an impressive non-stop voyage of 3,500 nautical miles. The names Kocacay I and Kocacay II were applied to the tugs temporarily until after delivery and handover. This is a common practice with Sanmar newbuilds with each vessel carrying its class name (e.g Kocacay) and the number in the series (e,g II). Official handover was in late October once the five crews of 4 had completed their familiarisation, with the naming ceremony two weeks prior to this. The newbuilds are now at Scapa Pier where they will be based and look likely to replace the Einar and Erlend.

Special thanks must go to Ernst Schneider of robert Allen Ltd for the invaluable assistance with information and diagrams and Captain Taylor MNI, Orkney Islands Council Towage Services.