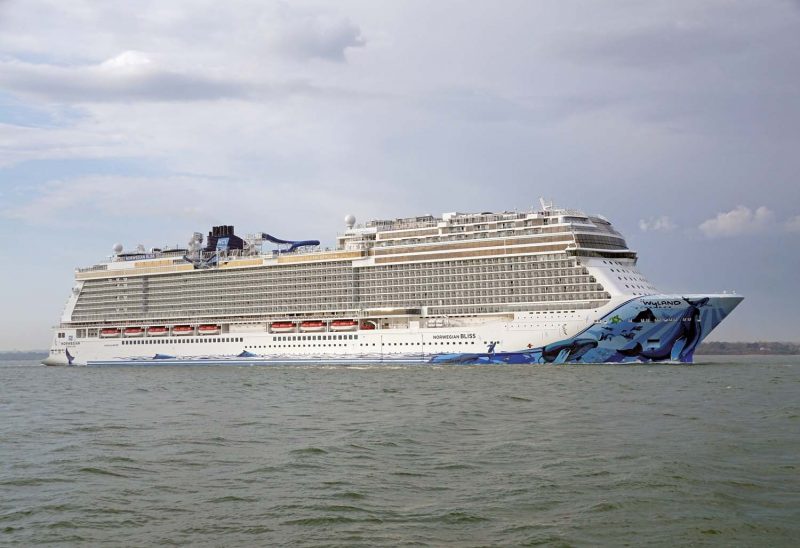 Even before the delivery of the 155,873gt Norwegian Epic in 2010, Norwegian Cruise Line was planning a new breed of ship, culminating in the birth of the Breakaway Class. The 145,655gt Norwegian Breakaway commenced construction on 21st September 2011 and was delivered on 25th April 2013. Sistership Norwegian Getaway followed on 10th January 2014. No sooner had construction of the ‘Breakaway commenced than an expanded version of the class, to be known as Breakaway Plus, being around 10% larger with an extra deck to incorporate new innovations, had been announced. The first example arrived in the form of the 165,157gt Norwegian Escape in the late autumn of 2015. The next member of the class was to be the Norwegian Bliss but this was revised to the Norwegian Joy. The 167,725gt ship was tailored to the new Chinese cruise market and was delivered on 27th April 2017. Two slightly smaller, 150,695gt, Breakaway type vessels were also delivered in 2016 and 2017 as the Genting Dream and World Dream for Star Cruises. The latter was founded as an associate of the Malaysian Genting Group in 1993 with its corporate headquarters in Hong Kong. Star Cruises acquired Sun Cruises in 1999 and fully acquired Norwegian Cruise Line, including its subsidiaries Orient Lines and Norwegian Capricorn Line, in 2000. Prior to the purchase of NCL, Star Cruises had several other newbuilds planned or already under construction, but with the merger of the two companies, most of the new vessels joined the NCL fleet.

Norwegian Cruise Line announced on 14th July 2014 that it had reached an agreement with Meyer Werft Gmbh of Germany to build two more Breakaway-Plus class cruise ships for delivery in the second quarter 2018 and the fourth quarter 2019. The contract price for both ships was stated as approximately Euro 1.6 billion. The first ship of this duo was assigned the name Norwegian Bliss and the keel laying ceremony for Hull No. S707 took place at Meyer Werft’s state of the art cruise ship factory at Papenburg on 24th May 2017. During the ceremony, the first of 90 blocks that would comprise the 168,028gt vessel was lifted into the covered building hall, officially marking the start of the ship’s assembly. NCL’s President and Chief Executive Officer, Andy Stuart, was present in the hall and laid the traditional lucky coin, etched with the outline of the ship’s signature hull scene designed by wildlife artist Wyland, before the first block was lowered into place. Readers may well be aware that each NCL ship has her own distinctive bow artwork and the Breakaway Class members are no exception. Perhaps the only distraction from these scenes is that the Artist’s name is carried forward on the bow whilst the ship’s name is shown along the vessel’s side, aft of the bow. The Norwegian Bliss provided the blank canvas for one of the world’s premier marine life artists, Wyland. Entitled “Cruising with the Whales,” the magnificent scene prominently features a mother humpback whale and her calf as the centrepiece, signifying the beauty of Alaska and the importance of conservation. Wyland specialises in iconic whale murals, marine life paintings and sculptures. The finished artwork on the ‘Bliss was revealed to the world on 17th February 2018 when the ship was floated out of the cavernous building dock at the shipyard. The uninitiated will think that the ship is named Wyland but of course her name is displayed further aft.

The Norwegian Bliss is the 12th NCL ship to be constructed by Meyer Werft, whose cruise ship building expertise was put on the map when P&O’s 69,840gt Oriana was delivered in 1995. The shipyard was founded in 1795 and is in its seventh generation of family ownership. The first car ferry, the Malmo, was built at Papenburg in 1964 and the first cruise ship was delivered in the form of Home Lines’ Homeric (2) in 1986. Bernard Meyer has been at the helm since 1982. The company began building iron ships with steam machines in 1872, an era when around 20 shipyards populated the Papenburg area. Today only Meyer Werft survives and the company also has a subsidiary, Neptun Werft, at Rostock (since 1997) and the blossoming Meyer Turku yard in Finland, another cruise ship specialist, acquired in 2014.

The Norwegian Bliss, dubbed the first cruise ship custom-built with features and amenities for the ultimate Alaska cruise experience, departed Meyer Werft’s fitting out quay at Papenburg, Germany on the night of 13th March 2018 for her conveyance along the River Ems, arriving at Eemshaven, The Netherlands, the following day. Once clear of the narrow sea lock at Meyer Werft, a manoeuvre that takes two hours, the ship was towed stern first down the river, passing through the narrow passages at Friesenbrücke in Weener, Jann Berghaus Brücke in Leer and the Ems-Barrier in Gandersum. The tug that trails the ship at the bow is attached to a “V-shaped” pontoon which cradles the ship’s bow and improves manoeuvrability during the slow passage. Once at Eemshaven the ship took on additional provisions and crew before heading out into the North Sea for technical and sea trials. The 16th member of the NCL fleet then proceeded to Bremerhaven’s Columbus Cruise Centre on the Columbuskaje. This terminal was built on the River Geeste around 1857 as Germany’s largest passenger port at that time, whilst the present facilities came into being from 1924.

A brand new terminal here will commence the construction phase of a €78.7 million project in early 2021 to enable it to easily handle the large cruise ships of today. On 19th April the Norwegian Bliss became the latest Papenburg newbuild to be handed over here and invited guests then converged on the terminal from across Europe and further afield to embark the ship for her first passenger carrying voyage. This departed at 19.30 that same evening bound for Southampton as the first part of her delivery voyage to Seattle.

This cruise ship is this month's newbuild feature