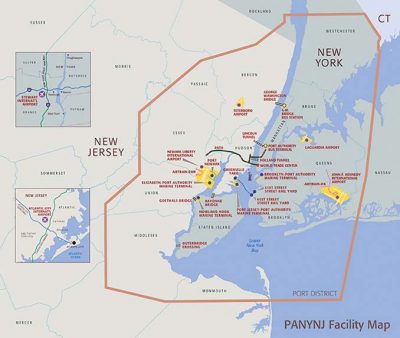 The Port of New York is one of the largest ports in the world, lying mostly around the East River and the North or Hudson River, and encompassing the Ports of both New York and New Jersey. The city is equally famous for its skyscrapers with the Flatiron Building of 1902 as the first of the giants and lavishly decorated with Florentine Renaissance motifs. The Woolworth Building of 1913 at 792 feet in height with sixty storeys in Downtown Manhattan was a Gothic giant decorated with gargoyles, frescoes, and stone lacework. The art deco Chrysler Building in Midtown Manhattan became the tallest structure in the city in 1929, but a year later the Empire State Building at 1,250 feet took over this lofty accolade. The view from the top of these skyscrapers, including the Cunard Building at the Battery Park end of Broadway, over the harbour is spectacular, taking in Downtown Manhattan, Governor’s Island and Brooklyn, with the Verrazano Narrows suspension bridge linking across to Staten Island in the distance. Ships of all types can be seen making their way to the Hudson River, and container ships can be seen in the distance making their way under the bridge and through the Kill van Kull tidal strait to the Port Newark and Port Elizabeth container terminals.

History Of The Port Of New York

Seven native Indian tribes lived in the Hudson River valley, but with the coming of the white man bringing smallpox, only a few hundred tribal members remained in 1700. The first two Europeans to arrive in this natural harbour were Giovanni da Verrazano in 1524 and Henry Hudson in 1609. However, it was the Dutch settlement of Nieuw Amsterdam in 1626 under the leadership of Dutch governor Peter Stuyvesant that turned New York into a civilised and independent city. The defeat of the Dutch by the Royal Navy made Stuyvesant surrender the port of New York to the British without a shot being fired, and he then swore allegiance to the British Crown to remain in the port for the remainder of his life. The population of New York was under five thousand in 1700, but the British Governors were open to bribes to flout port regulations, but worse still a strong spirit of independence was growing in the New England colonies.

A Free Press was obtained in 1735 as the result of a libel suit against Governor William Cosby, and thirty years later the Governor of the Port of New York was forced to accept a fixed salary, a humiliating action by local colonial citizens. Violent conflict between British soldiers and colonial citizens broke out in 1770, but George Washington knew he could not defend New York after his Declaration of Independence on 4th July 1776. George Washington left his Mount Vernon home on 16th April 1789 and came ashore two weeks later at New York to give his inaugural address as the first President, the new Constitution of the independent United States of America having been ratified by Britain in the previous year. One hundred years later, the population of New York celebrated the centennial of the new Republic, with President Benjamin Harrison, the 23rd President, making a speech after coming ashore at a Wall Street pier on 30th April 1889. President George Bush, the 41st President, made a similar speech to the nation on the bicentennial in April 1989.

New York City Hall was designed in 1811 by John McComb junior and Joseph Francois Mangin to be a blend of Federal and French Renaissance architecture, and has been the seat of New York City government since 1812. Marble cladding on the exterior, marble stairways and a fine internal domed rotunda encircled by ten columns are features. The Governor’s Room houses a portrait gallery of early New York leaders. The body of Abraham Lincoln lay in state in 1865 in the large room immediately after passing through the magnificent entrance.

The Statue of Liberty was the brainchild of French sculptor Frederic Auguste Bartholdi and was a gift from the French Government to the American people. It was unveiled by President Grover Cleveland on 28th October 1886. The golden torch held in the hand of Lady Liberty is coated in 24 carat gold leaf, and the seven rays on her crown represent the seven oceans. The Statue dominates New York harbour and is 305 feet in height. The Ellis Island Immigration Building was built along the lines of a train station with a majestic triple arched entrance, decorative Flemish bond brickwork, and granite quoins and belvederes. The Second Floor Registry Room of length 338 feet has a beautiful vaulted ceiling with tiles by Rafael Guastavino, under which the newly arrived immigrants lined up to have their documents checked and any undesirables, criminals and anarchists turned back.

This month's port of call features the Port of New York