The Port of Naples is dominated by the brooding bulk of Mount Vesuvius, a sleeping volcano that last exploded in 1944 with large loss of life and the destruction of the funicular railway to the top, and is unpredictable as to when it will explode again. It is a source of fear and wonder to the residents of Naples, and from a lofty 3,750 feet the view from the top is magnificent, taking in a sweeping panorama of Naples, Sorrento and the islands of Procida, Ischia and Capri. If you wish to see the effects of the power of pyroclastic blasts and molten lava on the local population, visit the ruins of Pompeii or Herculaneum, once great cities whose entire population was snuffed out in a few minutes. The Port of Naples suffered considerable damage from earthquakes in 1980 with three thousand people killed in the Campania region around Naples. Since then, the area to the west of Naples has suffered from major rises and falls of the land, and there were serious mudslides in 1998. The Port of Naples is an arc shaped port and has a splendid view southwards over the beautiful Bay of Naples and the islands of Capri, Ischia and Procida.

History Of The Port Of Naples

Greeks, Romans, Byzantines, Normans, Spanish and French rulers have all controlled Naples over the last two thousand years. The French Bourbon family ruled Naples until 1860, and the Italian peninsula system of separate States e.g. Campania for the Naples area, Tuscany, Piedmont etc. held sway until the unification of these many disparate States into one Italian country took place in 1861. The first steamship in the Mediterranean set out from the port in 1818, and a shipyard was established in the port shortly afterwards. However, emigration to New York and the United States of America with over four million people leaving the area up to the 1910s decade, tells the decline of the area after unification.

World War II saw Naples as a major supply port for the German and Italian campaigns in North Africa. Naples became the most bombed port in Italy by the Allies, and after the Italian surrender on 8th September 1943, the British Eighth Army suffered major casualties from the retreating Germans and from malaria, which was prevalent in the area at that time. After a four day uprising by the people of Naples following the surrender, the occupying German forces were driven out of the city. Emigration in the immediate aftermath in the late 1940s was again huge as Neapolitans could not see a good living and a future in their city. Government spending to improve the infrastructure in the 1950s halted the emigration to some extent. Shipowner Achille Lauro became Mayor of Naples in 1952, with the new housing stock of terraced houses now replacing the destruction of war. However, the city still suffers today from very high unemployment and fears regarding the stability of the volcanic and earthquake prone nature of the land. 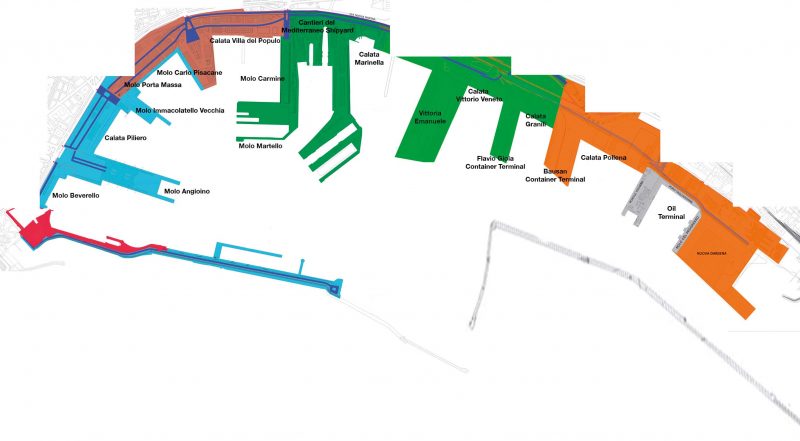 The express Transatlantic liners of Italia Line, Rex and Conte di Savoia in the 1930s, and Augustus of 1951, Giulio Cesare of 1952, Cristoforo Columbo of 1954, the ill fated Andrea Doria of 1953, Leonardo da Vinci of 1960, and the twin funnelled Raffaello and Michelangelo of 1965, saw the heyday of Naples as a Transatlantic port of emigration from the iconic Stazione Marittima, and now part of the Cruise Terminal. The Port of Naples remains today as a passenger hub for millions of passengers that pass through each year on their way to or from cruise destinations across the world, or on short trips around the beautiful Bay of Naples to Sorrento and the Amalfi Coast or the islands of Capri and Ischia in the Bay. Naples, of course, is a tourist destination in its own right, with cruise passengers arriving in the port at the excellent and ideal location of the Cruise Terminal from which to explore the famous buildings and beauty spots of the city. The total of both cruise passengers and Bay tourists is now well in excess of ten million passengers per annum.

The totals for oil and liquid bulk would have been a lot higher if it were not for a disastrous fire on 21st December 1985 at the Q8 terminal. An explosion and fire destroyed two dozen of the 32 large storage tanks after a blaze had broken out when one of the tanks was overfilled. The disaster completely destroyed all of the terminal pipelines, offices and other terminal buildings with a financial loss of sixty million U.S. dollars. Nearby industrial and residential property was also destroyed, and the local Rimorchiatori Towage Company lost a significant part of its business from the berthing and unberthing of large tankers that then no longer called at Naples.

The Italian port is our feature for this month