Newbuild of the Month 13th February 2018 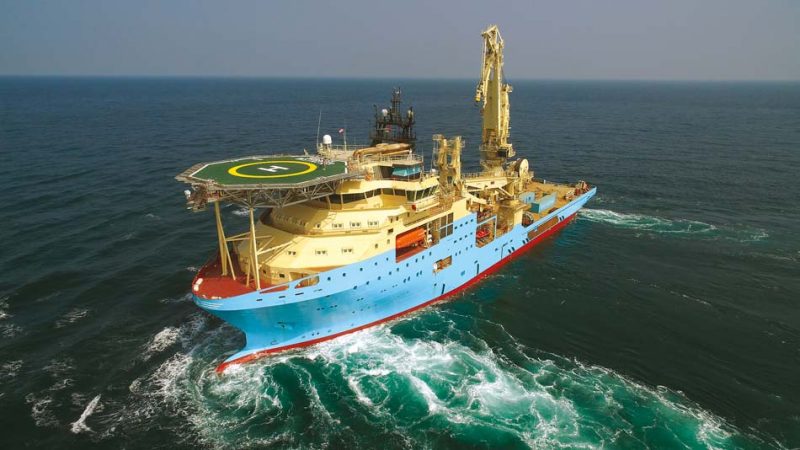 Maersk Supply Service (MSS) became the first Scandinavian shipping company to enter the offshore market in 1969 and was later established as an independent business unit in the A. P. Moller-Maersk Group in 1974. Five years later MSS had developed into the leading owner and operator in the field of large offshore support vessels with the delivery of the first anchor handling tug supply vessel of more than 10,000bhp. In 1994 MSS diversified into the cable laying market following the conversion of the platform supply vessel Maersk Fighter into a cable vessel. The following year the company exited the anchor handling tug supply vessel market in terms of tonnage with an output of less than 10,000bhp. Two years later the first 20,000bhp anchor handling tug supply vessel (AHTS) was delivered to the fleet. The first four custom built cable vessels were ordered in 1998 and in 2000 the first A-type AHTS of over 23,500bhp arrived in the fleet. Maersk Supply Service A/S was established in 2008 as a separate limited company with its own dedicated HSEQ function with a fleet renewal programme being completed two years later with the delivery of 18 new vessels, representing an investment of more than $1 billion. A further two AHTS were ordered in 2011 with a further 11 new-buildings (six AHTS and five subsea support vessels) ordered in 2014.

In response to a global downturn in the offshore market sector, Maersk Supply Service entered into agreements with two shipyards during the summer of 2017 to postpone the delivery of a total of nine newbuildings. The vessels in question included five Starfish Class AHTS which are under construction at the Kleven Yard in Norway, and the four Stingray Class subsea support vessels, being built by China’s Cosco Dalian shipyard. This deferral was seen by all parties as the best possible solution given the market situation at the time. The first Starfish Class AHTS, the 10,181gt Maersk Master, was delivered in March this year, while vessel number two, the Maersk Mariner, was delivered in late June 2017. The next three Starfish ships from Kleven will be delivered in 2018, and the last in the series will arrive in 2019. The present day fleet consists of over forty vessels as follows:-

Until the 2017 deliveries commenced the newest vessel in the MSS fleet was the 10,181gt cable layer Maersk Connector, delivered in 2016 and the subject of a previous newbuild feature.

The offshore support vessel is this month's featured newbuild