Newbuild of the Month 13th November 2018 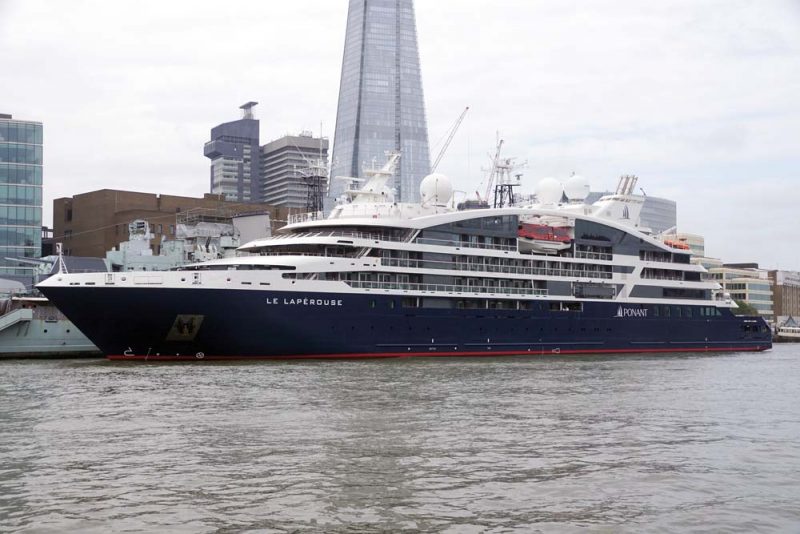 In 1986 Jean-Emmanuel Sauvée, a young French Merchant Navy officer and travel enthusiast, decided to fulfil his dream by creating an innovative concept: showcasing the art of travelling at sea in the finest French tradition. Two years later in 1988, La Compagnie des Îles du Ponant was created on 1st April with fourteen shareholders. The name “Ponant” means “the west” in Latin but also reflected the destination of one of the first itineraries planned, a cruise around the Ponant Isles.

The Le Ponant project began in 1989 and the 1,189gt three masted Barque of the same name was delivered in 1991 and remains with the company today. The company expanded its fleet in November 1998 with the delivery of 3,504gt cruising yacht Le Levant. She served the company for 13 years and was purchased by Paul Gauguin Cruises in 2012 and renamed Tere Moana. The vessel has operated for Grand Circle Cruises as the Clio since July 2016. In 2004 Ponant purchased the 8282gt/1974 built cruise ship Le Diamant and she remained in the fleet until October 2012 when she passed to Quark Expeditions.

In 2004, the French CMA-CGM Group, one of the global leaders in maritime container transport, became La Compagnie des Îles du Ponant’s major shareholder. The company subsequently established offices in Marseille (previously based in Nantes) and changed its name to La Compagnie du Ponant. Under the influence of CMA-CGM the first of four stylish and luxurious cruising yachts was delivered in 2010. The 10,944gt, 132 stateroom, 264 guest and 139 crew capacity Le Boréal was built by Fincantieri in Italy and then won the Gold Best Newcomer of the Year prize, awarded by the European Cruiser Association (EUCRAS). Sister vessel L’Austral followed later the same year. A second pair of these ships was also ordered and they were delivered in the form of the 10,992gt Le Soléal in 2013 and Le Lyrial in 2015.

In 2012, CMA CGM sold the operation to Bridgepoint Capital and another new chapter for La Compagnie du Ponant followed in autumn 2015 when the company joined the ARTÉMIS Group, a Pinault family holding. In 2013, Le Soléal became the first French commercial ship to traverse the Northwest Passage, departing Kangerlussuaq in Greenland on 26th August and arriving in Anadyr, Russia, on 16th September.

The successful navigation of the Northwest Passage was a hint of things to come. In March 2016 Ponant placed an order for a quartet of new 9,976gt, 131.46m long, 18m beam, 4.7m draught and 1C ice-class expedition cruise ships, to be known as the Explorer Class, with the VARD Shipyard, a subsidiary of Fincantieri. Named after famous French Explorers, the ships would receive the names Le Lapérouse, Le Champlain, Le Bougainville and Le Dumont d’Urville (originally to receive the name Le Kerguelen).

The Le Lapérouse takes her name from Naval Officer Jean-François de Galaup, comte de Lapérouse, born 1741. VARD, a Norwegian shipbuilding operation, has facilities in Langsten, Brattvaag, Søviknes, Aukra and Brevik in Norway plus elsewhere in the world including Vung Tau (Vietnam), Braila & Tulcea (Romania), Singapore and Promar, Brazil. The Explorers contract is being handled by the Søviknes shipyard, which was founded in 1936, is located at Søvik in Norway’s Haram municipality and employs 196 personnel. The closest city is Ålesund, 52km away.

VARD was listed at the Singapore Exchange on 12th November 2010 and in 2013 the majority shareholder became Fincantieri Oil & Gas S.p.A., a wholly owned subsidiary of Fincantieri S.p.A., which owns 79.34% of the Group. The shipyard at Tulcea in Romania on the Black Sea coast was established in 1975 and acquired by VARD in 2000. The facility is handling the construction of the hulls/superstructures of the Explorer Class ships. The keel for Hull No. 848 was laid on 20th February 2017 and the hull was launched on 18th December prior to a lengthy sea voyage under tow to Søviknes in Norway. Around 4 weeks later the vessel arrived and the fitting out process began. Le Lapérouse completed her first sea trials on 18th May 2018 with a backdrop of the stunning Norwegian coast. The new ship was delivered to Ponant on 15th June 2018 and sailed from her birthplace the next day bound for Reykjavik, Iceland, with Captain Jean-Philippe Lemaire in command. She arrived on 19th June in preparation for the start of her maiden cruise, a circumnavigation of Iceland on charter to Tauck.

On 10th July the inauguration of Le Lapérouse, was celebrated in the port of Hafnarfjörður, Iceland, in the presence of Maryvonne Pinault, the wife of French billionaire businessman François Pinault and the godmother of the ship. Also present were prominent political and cultural figures, international media and key partners. The ceremony was a vibrant Breton-inspired occasion, stimulated by Ponant’s 30th Anniversary this year. As Le Lapérouse sailed away from the port she was greeted by fleet mate Le Soléal, which was also positioned in Icelandic waters, and circled the new ship several times.

The construction of the five other ships in the series is well under way. The steel-cutting ceremony for the 5th and 6th vessels ordered in March 2018, Le Bellot and Le Surville, took place on 4th April 2018 in Romania. Both are scheduled for delivery in 2020 while Le Bougainville and Le Dumont-d’Urville will be delivered in 2019. More recently, the unfinished Le Champlain reached Norway on 27th April to complete the final phases of her construction.

Also, in December 2017, Ponant, the only French cruise line, ordered an icebreaking expedition cruise ship from VARD. The 274 million Euro vessel will be built to the second-highest Polar Class, PC 2, and will be capable of taking tourists to the North Pole. The vessel, the world’s first electric hybrid polar exploration ship powered by LNG and dubbed Ponant Icebreaker, is scheduled for delivery in 2021. The ship will be named Le Commandant Charcot after the 1867 born Jean-Baptiste Charcot