Prior to 1250, the town of King’s Lynn, in the right hand corner of East Anglia’s large square estuary, the Wash, sat at the head of the small Norfolk rivers Gay and Nar and was fed by several inlets or fleets, Purfleet forming the town’s harbour. The nearby rivers Ouse and Nene joined near Wisbech to the west and flowed into the sea from there.

Even at such an early stage in the life of the port, it was necessary for human hand to play a part in altering its natural features. Silting of the channel was becoming a problem so Well Creek was excavated, diverting the major rivers of the Nene and Ouse to King’s Lynn.

This was joined by other cuts to the north and east which allowed the Ouse to join the Little Ouse and Wissey, giving a more direct route for these now combined rivers to reach Kings Lynn.

All this endeavour came on the back of 12th Century cuts which made it easier for Ely and Cambridge to send corn by boat, as the population and agricultural activity increased in the broad expanse of fertile lands directly to the south of the town. 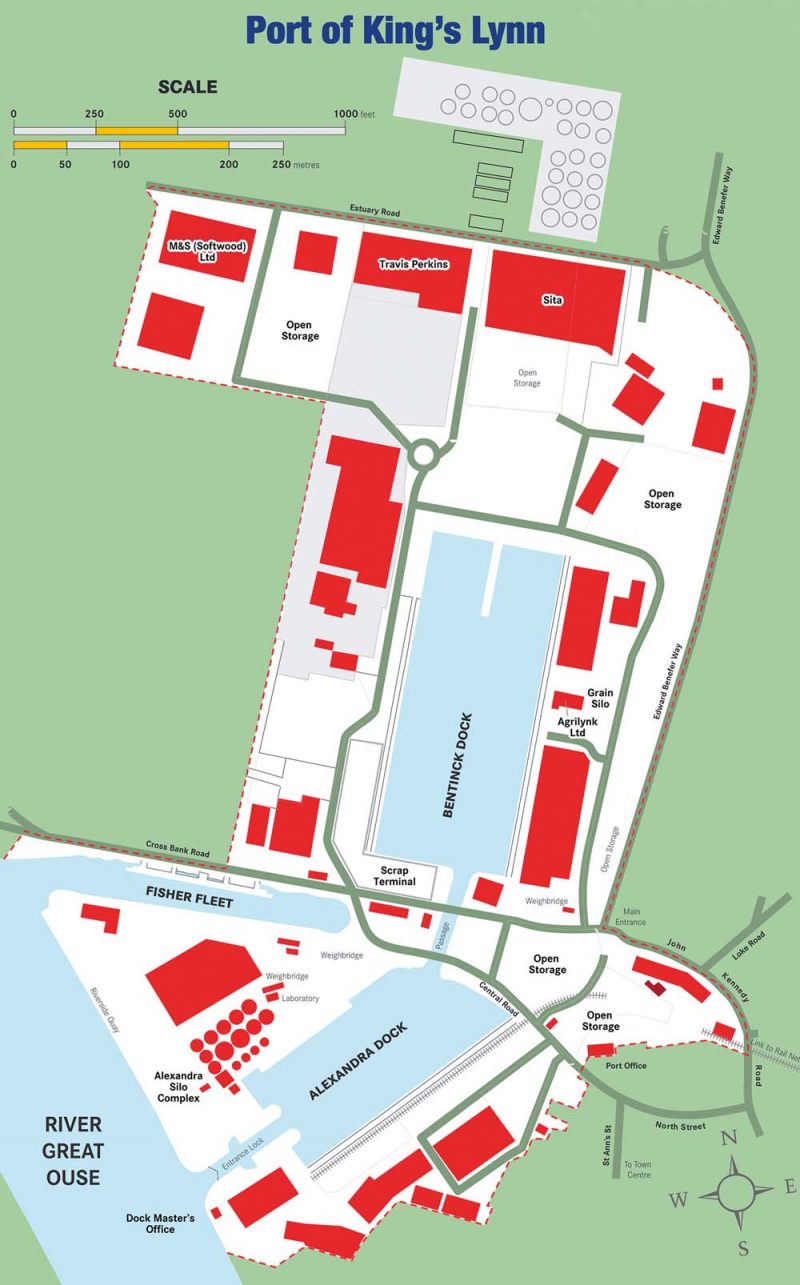 King’s Lynn was at a perfect advantage of being a natural outlet for trade and huge amounts of cargo including wool, hides, wine, fish and ale passed through the harbour. At this time the town’s main industry was the boiling of salt, which was exported. The great inland religious houses sent corn and wool to Europe, receiving in return vital supplies of timber and other building materials. Pitch and iron were imported from Scandinavia. Such was the town’s prosperity, that in 1203 King John decided to tax 15% on imports and exports.

The town was to remain in the very top of English ports for centuries because of its strategic location on the Wash. King’s Lynn and its ‘sister’ port of Boston were second only to London.

Merchant capitalists sailed their ships all over Europe and were in Lynn trading furs and wine for corn and fish. The Low Country trade in particular was vital for the wool merchants, with 2000 sacks per year leaving Lynn and also reaching the Baltic, Flanders and Gascony along with supplies of corn and ale.

By the 15th Century, trade with the Hanseatic League became very important for the town and a warehouse was built to accommodate this in 1475. Furs, beeswax, pitch, cloth and timer were exported and at this time Lynn also sent an annual fishing fleet to Iceland. Trade diversified and coastal traffic was crucial, but all too quickly greatly diminished by the competitive ‘lure’ of the port of London and shrinking wool exports.

The trade in wool continued to decline and by the 16th Century King’s Lynn was no longer a major international port. During this and the following century the main export was grain and iron, timber and pitch were imported. Of course, by then, like many eastern ports, it was suffering from the discovery of the Americas, which bought great prosperity to towns such as Liverpool. It did however retain a trade with Northern France, in 1600 sending cargoes of coal and cloth to Dieppe and Rouen in exchange for hops and millstones, the rock which was only found in France.

In the year 1604-5, 96 ships were entering and 159 leaving the port. Merchants returned to Iceland and broke the monopoly of chartered companies in London. Trade flourished with the Netherlands, Scandinavia, France and Spain.

It is noteworthy that by the late 17th Century, imports of wine from Spain, Portugal and France in exchange for wheat and barley and an increase in the coastal trade boosted King’s Lynn’s prospects. There was also coal coming down from the north. Also, the great scheme to drain the nearby Fens had begun, which brought with it a huge rise in the cultivation of wheat, so the export of farming products became vital to the port’s livelihood. The town had also developed as a substantial fishing port and shipbuilding, rope and sail making began to thrive.

Unfortunately, by now the River Ouse had grown too large and it simply wasn’t getting water to the sea quick enough, creating problems with navigation and flooding. Apart from the extensive draining of the Fens where onions, hemp, oilseed, peas and flax were grown, the 17th Century also saw projects such as a shortening of the Ouse and the construction of a very large sluice several miles inland at Denver (its impressive successor is still to be seen today) but this threatened Lynn as silt began dropping in the harbour and the Fenland water couldn’t escape.

Above Denver the river was very slow as there was no tide to push water upstream. Where seagoing ships had once freely sailed inland, during the summer, only small craft could navigate this part of the Ouse and cargo from the larger vessels had to be transferred to horse and cart at the sluice. There were several attempts to be rid of this obstacle and an accident of nature saw it demolished, but it was re-built in 1748.

Otherwise, generally speaking, navigational problems had been reduced in the 17th Century through inland improvements to the river system. Economic activity increased with the counties Lynn served and trade prospered, with the harbour now capable of taking 250 ships.

During the 18th Century, huge work was undertaken to repair the crumbling banks of the Ouse and clear the channels of the ‘fleets’ and new cranes and quays were built.

The Town Corporation improved the reliability of the pilots and new moorings, buoys and beacons helped make the channel safe. Trade from large ships increased in the harbour and were unloaded of their cargoes of coal, flour and salt by lighters as navigation to the sluice was by then so difficult.

The Corporation at this point sought advice on improving the Ouse navigation. Eau Brink Cut to St. German was completed to save time by removing the necessity of following the natural loop in the river and the channel was scoured in 1818. Within two years the faster flow of water had removed enough silt to make the Ouse several feet deeper, but mud was still being dumped in the East Harbour by the ebb tide. Larger ships couldn’t cope with the wide, shallow channel and unfortunately Lynn soon saw itself being overtaken by Hull.

King's Lynn is our port of call for April