Newbuild of the Month 13th September 2016 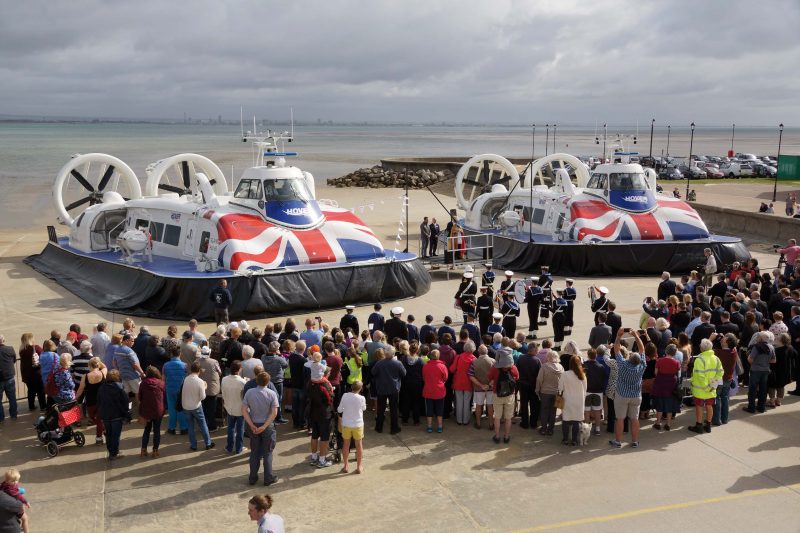 The hovercraft as we know it has been in existence since the SRN1, developed by Sir Christopher Cockerell and built by Saunders Roe, first hovered on 11th June 1959. The first passenger-carrying hovercraft to enter regular service was the Vickers VA-3 in the summer of 1962, carrying passengers along the north Wales coast from Moreton, Merseyside, to Rhyl. The Hovertravel service between Ryde, Isle of Wight, and Southsea commenced on 24th July 1965 using 38- seat SRN6 craft and, in 2016, entered a new era with the delivery of two state-of-the-art 12000TD hovercraft to replace two ageing AP1-88 craft in frontline service. East Cowes on the Isle of Wight, was a thriving centre of hovercraft production for Saunders Roe/Westland with the SRN2, SRN5, SRN6 and cross-channel SRN4 (1968) variants all being born here plus the BH-7. The SRN2 had also been trialled between Southsea and Ryde in 1962 among other areas. In 1966 Saunders-Roe and Vickers joined forces as the British Hovercraft Corporation (BHC) with other U.K. manufacturers of the time including Cushioncraft and the Woolston (Southampton) based Hovermarine. Hovercraft were generally constructed using aircraft industry methods until the ubiquitous AP1-88 was developed jointly by Hoverwork, BHC (British Hovercraft Corporation) and the NRDC (National Research Development Council) from 1981.

The first pre-production prototype, the Tenacity, was built and tested in 1982 using shipbuilding techniques and materials (welded aluminium structure and 2x Deutz BF12L 513FC air-cooled turbo-diesels for propulsion and 2x MTU V12 water-cooled 800hp turbo-diesels for lift) prior to entering service with Hovertravel in July 1983 when the AP1-88s began to replace the smaller and noisier SRN6 craft. The Tenacity’s aluminium hull was produced by Fairey Allday at their Gosport boatyard and fitted out at Hoverwork’s base in St. Helen’s. Hoverwork began operations in December 1965 to support Hovertravel and to maintain/build craft, firstly at Dinnis Yard in Cowes and then at Woodnuts Yard in St. Helen’s on the shores of Bembridge Harbour from 1974. Hovercraft construction and maintenance at the BHC/GKN Westland East Cowes premises was phased out leaving just Hoverwork representing the industry on the Island. In 2008, the Bland Group increased its shareholding in Hovertravel from 25% to 99.92%, and also purchased Griffon Hovercraft Ltd, a hovercraft manufacturer based in Southampton. The Bland Group can trace its history back to 1810 when a small shipping agency was established in Gibraltar by Marcus Henry Bland. This company was later acquired by the Gaggero family, and today, over 200 years later, it continues to trade, evolve and prosper under that one family. The Gaggero family has managed the Bland Group since 1862, whilst owning and developing this remarkable company since 1891. Over four generations, the family has successfully steered the Bland Group through momentous, and often turbulent, periods in the history of the world and its resulting economic vagaries. In March 2009, Hoverwork and Griffon were merged to create Griffon Hoverwork Ltd., a world leading hovercraft producer with over 40 years of experience in the design, development, manufacture and operation of hovercraft.

The last complete craft built at Hoverwork in St. Helen’s was the Canadian Coastguard’s Mamilossa with the final passenger craft being Hovertravel’s BHT-130 Solent Express of 2007. The Canadian Coastguard’s Moytel was fabricated at Hoverwork’s I.o.Wight premises and then taken to Southampton for fitting out when the company’s base was moved across the Solent. The newly combined Griffon Hoverwork Ltd. relocated to Merlin Quay, Woolston, Southampton from Hythe (Griffon Hovercraft) and St. Helen’s (Hoverwork Ltd.). The new yard, the former 4.37 acre Vestas site, officially opened on 11th November 2010. Griffon Hoverwork Ltd. has sold, and has in service more than 150 hovercraft in over 35 countries worldwide, operating in environments ranging from the jungles of South America to the freezing conditions of the Arctic. The hovercraft produced are used for passenger ferries, survey work, to support civil engineering support in the oil and gas industries, in logistics and also for Navy, Army, Coastguard and Paramilitary customers worldwide.