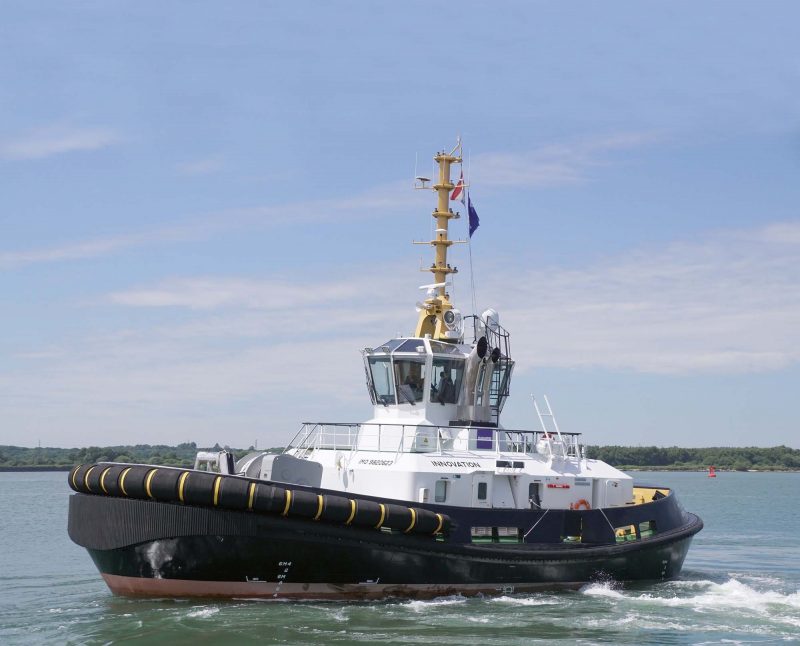 The world of tugs and towage is becoming ever more complex with a plethora of high-tech vessels now available for every conceivable combination of duties in pretty much any environment. Anyone who dismisses such vessels as “just a Tug” is greatly under estimating what these powerful little vessels are capable of. When flexing their muscles whilst working the largest of ships, the modern day tugs cannot fail to impress.  The Damen Group is at the forefront of researching, designing and building this category of workhorse. Their latest product is the RSD Tug 2513, described as the ultimate ship-handling tool and the answer to the increasing scale of cargo vessels such as container ships. To keep pace with future demands, the new design redefines the concept of compact agility, optimised to operate in both direct and indirect towing modes. The prototype vessel was built at Damen’s ubiquitous Galati Shipyard on the River Danube in Romania that has a rich shipbuilding history dating back centuries. The yard was established in 1893 as Fernic Shipyard Galati and, by the end of 1970, the facility had built 477 vessels including barges, tankers, bulk carriers and tugs. The yard continued to thrive and, in 1994, the Damen Shipyards Group, already firmly established in The Netherlands and developing its international business, began co-operating with Galati by sub-contracting the building of cargo ship hulls to the yard. In 1999 the Damen Group, by then the yard’s biggest client, acquired Galati Shipyard and began streamlining and refining the organisation. Located on the banks of the River Danube and resembling a small city, the shipyard occupies a huge 45 hectare site and currently employs over 2,400 people directly. The very first RSD Tug 2513 had the Yard No. 515001 and was delivered to the Damen Group on 19th April 2018. Upon delivery the ground-breaking tug embarked upon a 25 port tour on 26th April, starting at Malta’s Grand Harbour. The vessel then visited ports in Italy (Trieste, Ravenna, Naples, Civitavecchia, La Spezia, Livorno and Genoa), France (Toulon, Bordeaux & Brest), Spain (Barcelona, Tarragona, Valencia, Algeciras and Bilbao), Morocco (Tanger) and Portugal (Lisbon). Upon leaving Brest the Innovation crossed to Southampton, arriving on 10th June for a 4 day stay via the western Solent. On 11th June the vessel was shown to members of the local shipping industry and media and the following day she visited Portsmouth. On 13th June a call at Solent Towage, Fawley, was made before continuing the tour eastwards to Dover, Felixstowe, Antwerp, Terneuzen Rotterdam, Ijmuiden, Delfzijl, Bremerhaven, Hamburg and Copenhagen where the tour was due to conclude on 29th July after an 8,500 mile adventure. The expedition was hailed as a success with one serious Buyer coming forward before the tug had even left Italy. The trip also generated a fascinating insight for her less familiar visitors into the specifics of how a state-of-the-art tug such as the Innovation actually functions. The tour was organised by Damen, through its subsidiary Damen Marine Services (DMS), which owns and operates the vessel. Once the tour was completed, the tug joined DMS’ fleet, available for charter.