Newbuild of the Month 14th November 2016 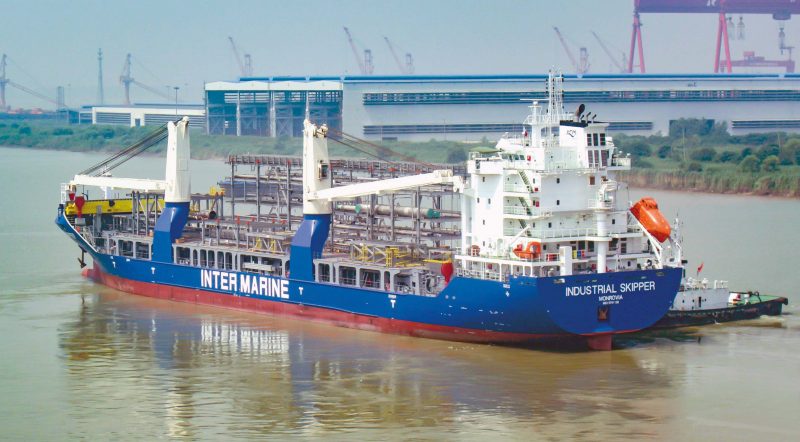 On 29th August Intermarine, LLC announced the delivery of the Industrial Skipper, an S-Type 500 Class Heavy- Lift Box-Hold MPP Tweendecker, from a shipyard in Rongcheng, China. Intermarine is a global leader in the transport of project, breakbulk and heavylift cargo. Founded in 1990, the company, through its subsidiaries and worldwide network of 20 offices, operates a flexible international fleet with lifting capacities up to 1,400 metric tons. The company also provides ocean transportation and marine logistics services with regular sailings in the Americas, West Africa, Europe, Asia and the Middle East, plus inducement voyages to Australia and other international ports. The company operates the largest U.S. flagged heavy-lift fleet and controls Industrial Terminals (Houston), the busiest project cargo terminal in the USA. As of October 2016 the company listed a fleet of 40 ships plus one SType 500 to still be delivered in 2016 (the Industrial Strength) and one S-Type 900 to be delivered in 2017. The oldest fleet members date from 1999. In 26 years the company has delivered 70 million cubic metres/31 metric tonnes of cargo and its ships have travelled 36 million nautical miles at sea. The ship began life as Yard No. HCY-166 at Huanghai Shipbuilding Co., Ltd. that manufactures Ro-Ro passenger ships, bulk carriers, and container vessels. The company was formerly known as Shandong Huanghai Shipbuilding Co. Ltd and changed its name to Huanghai Shipbuilding Co., Ltd. in 2007. The company was founded in 1944 and is based in Rongcheng, China. Rongcheng is a county-level city of Weihai City, at the eastern extremity of Shandong Province, China, looking out to the Yellow Sea in all directions but the west. Intermarine, LLC announced back on 12th May 2014 that it was adding a total of 15 vessels to its fleet to meet the rising demand from its valued customers regarding the shipment of heavy lift and project cargo. The fleet renewal programme involved long term charters on a series of new vessels from Sanfu Shipyard & Huanghai Shipbuilding Co. Ltd, two of the foremost builders of ships in China. These state-of-the-art, fuel-efficient, eco-friendly newbuilds, to be delivered 2016-2019, would form the backbone of the fleet and further enhance Intermarine’s commitment to maintaining its status as a high quality partner and operator in heavy lift/project transport.