Prior to Shell Tankers (UK) Ltd. participating in the commercial carriage of liquid natural gas (methane), the transportation of LNG was already an established technology, the liquid having been transported in insulated barges from Louisiana to Chicago through the USA inland water system, as early as 1951. 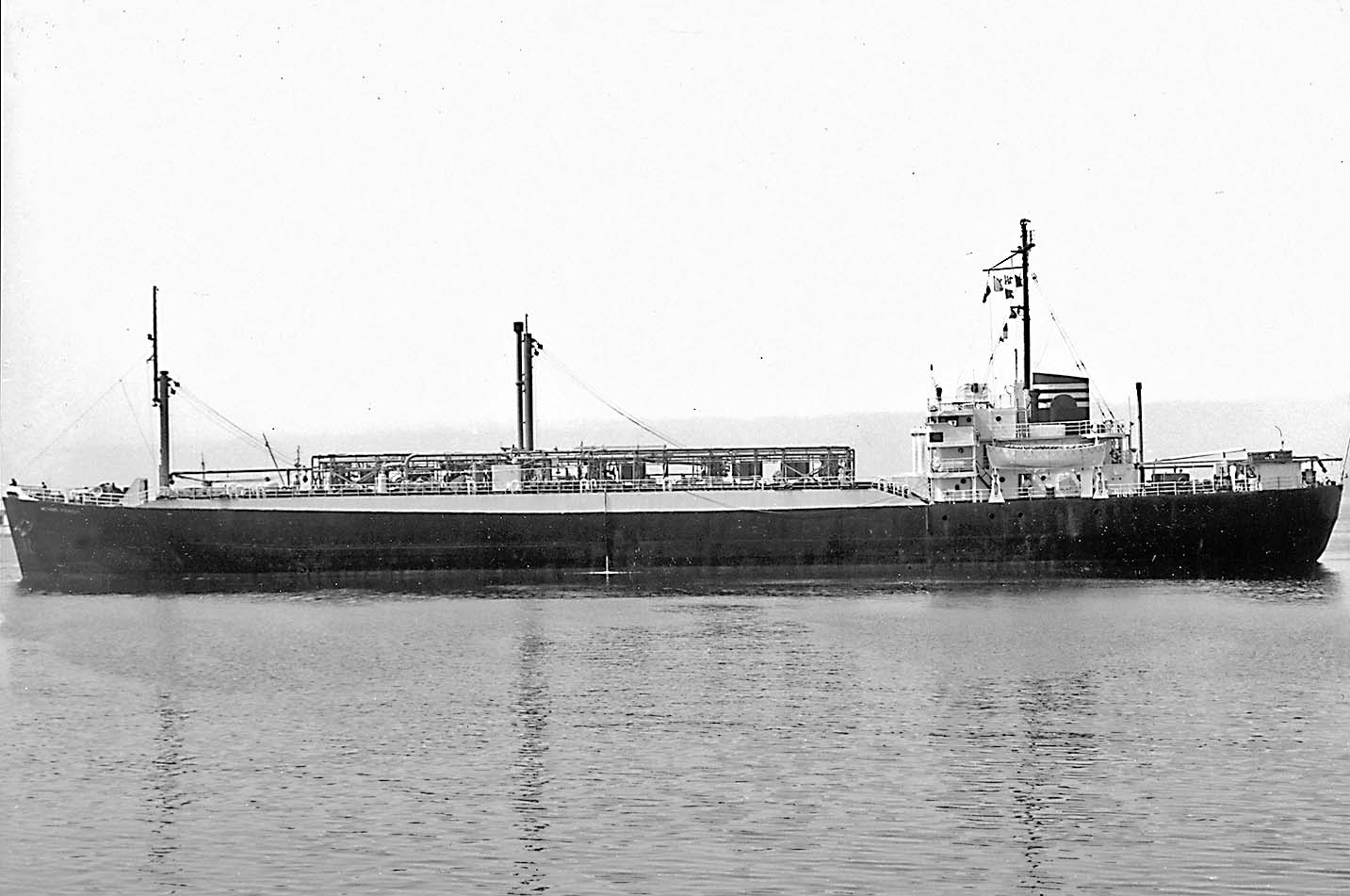 An experimental ship, Methane Pioneer (above), a conversion from a conventional carrier, was commissioned by the nationalized British gas organization, British Gas Council, to carry a transatlantic cargo in 1959 from Lake Charles to Canvey Island on the River Thames. The Pioneer was manned and operated by Stephenson Clarke (incidentally the world’s oldest shipping company) primarily a short trade company. The man who initiated the concept was Mr. Billy Wood-Prince, President of Union Stockyard and Transit Company of Chicago. USTC was joined by Continental Oil to form Constock in 1954. Subsequently Shell joined to create Conch International in 1960. 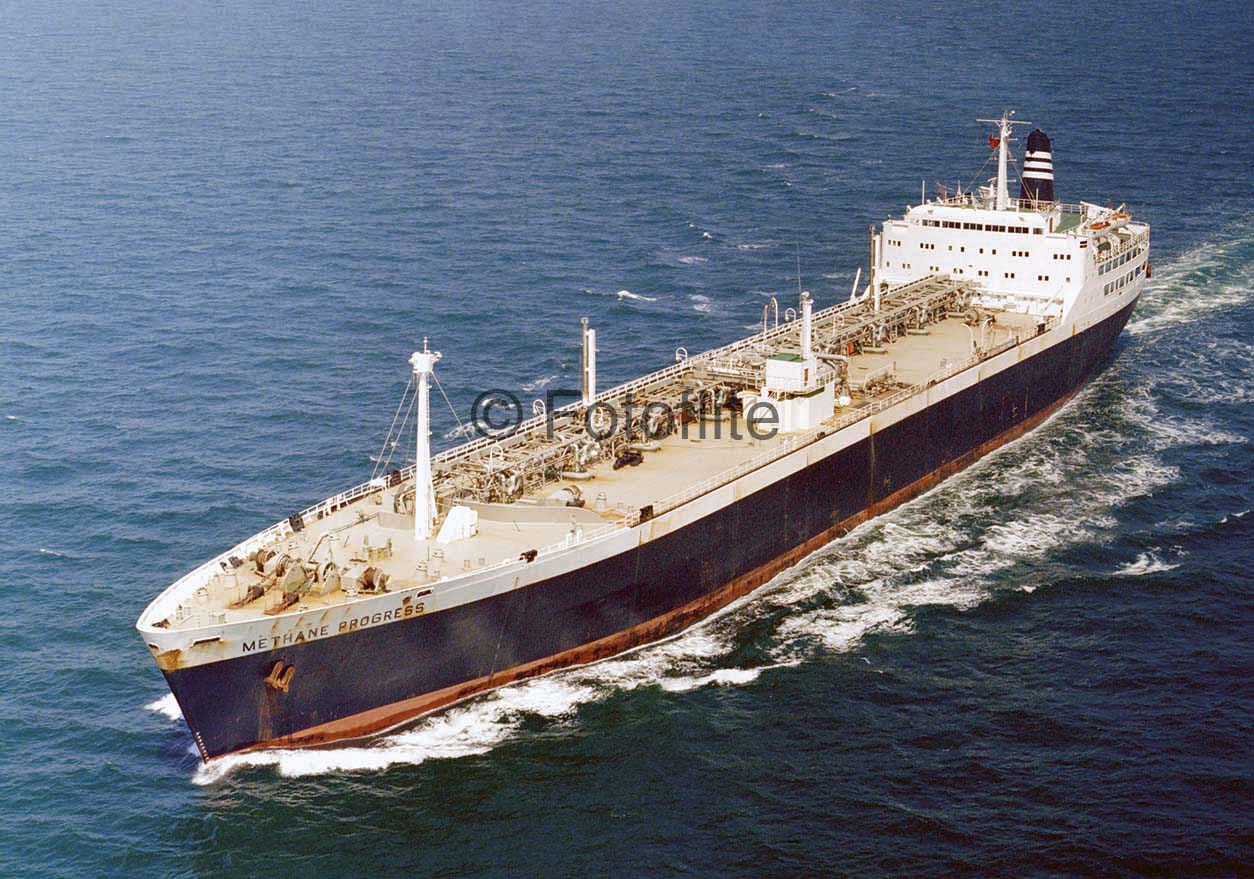 Thereafter Shell International Marine were contracted to design, supervise the building and operation of the world’s first two commercial LNG carriers, namely Methane Progress (above) and Methane Princeess, each 21,870 grt. The Princess was built in Barrow-in-Furnace. the Progress in Belfast. Concurrently the French were also building an LNG carrier named Jules Verne. All three ships were to load their cargoes at a new gas plant in Arzew in Algeria, the Methane ships to deliver to a purpose built installation at Canvey Island, the Jules Verne to Marseilles. Thus, from these small beginnings would eventually become a world-wide trade in moving LNG around the globe.

LNG is manufactured by progressively cooling the gas extracted from reservoirs located in or adjacent to oil fields which hitherto had been flared off as waste. Liquidizing methane reduces the volume of gas to one sixth of its of its gaseous volume . To achieve a liquid, natural gas has to be cooled to minus 161 degrees centigrade. To contain this volatile substance a number of systems were evolved to provide near total insulation in the cargo tanks. The two ‘P’s’ used balsa wood grown in South America, it was said that a veritable balsa forest was required to supply the insulation walls for their cargo tanks, not a particularly sustainable solution. The tanks were free standing and constructed with aluminium. Notwithstanding, these two vessels operated successfully for many years.

There followed a major undertaking in the Far East. During the 1970s, seven LNG carriers came into service ferrying gas from Brunei to Japan in a grand international co-operation. These were the ‘G’ class, in the customary Shell practice of naming ships after sea or land shells, in this case, molluscs beginning with the letter ‘G’. All ships were built in French yards, the main companies were the Royal Dutch Shell Group and the Mitsubishi Corporation. The LNG supplier was Brunei Shell, the receivers Tokyo Electric, Tokyo Gas and Osaka Gas. The liaising company was Coldgas. with offices in Bermuda. The ships (49,000 grt) were built to Shell’s design under the supervision of Shell International Marine and operated by Shell Tankers (UK) Ltd. The containment was quite different from that of the Methane ships, gone were the balsa and aluminium, the system was made of a thin stainless steel membrane with dihedral pockets giving the walls, top and bottom flexibility to combat the changes of temperature in the cycle of LNG transport, loading and discharging. The insulation was total and efficient. The passages to and from Japan were in perhaps the worst area for typhoons and seismic activity in the world. However the ships were equipped with the finest navigational and communication systems available at that period.

LNG boils constantly as it is an unstable substance. The boil-off (ie the ever present supply of gas) is utilized to propel the ship. Sometimes the ship, after say rough weather, creates more gas than is needed, the surplus is vented to the atmosphere via stacks. Occasionally lightning strikes and the gas ignites giving an alarming spectacle to passing ships. This doesn’t last long, because the heat melts lead capsules that hold the vent lid open and on melting shuts it, snuffing out the flames.

In the early 1980s the Malaysian Government commissioned the building of five large LNG carriers (68,085 grt) to transport gas from Sarawak in East Malaysia to Tokyo. Once again, an international venture! The ships were chartered by Malaysian LNG, a company jointly owned by the Malaysian Government (Petronas), Shell Gas BV and the Mitsubishi Corporation. Again the ships were built in France. A joint management/manning contract between MISC (Malaysian International Shipping Company) and Shell Tankers (UK) Ltd. was created, basically calling for deck and engine room personnel from STUK to operate the ships in the initial years, with the gradual integration of Malaysian officers succeeding the Brits as they became trained. The importance of this venture was indicated by the use of a ship simulator at Cardiff’s University of Wales, Maritime Department. The simulation was an exercise in approaching and berthing at the LNG terminal at Bintulu in Sarawak. All senior deck personnel underwent a week’s training at this facility before appointment to these ships, the Tenaga Satu/Tenaga Dua (Pictured Top)/Tenaga Tiga/Tenaga Empat and Tenaga Lima. Energy One to Five translated from the Malay. The crew were Malaysian, mostly Muslim. Officers joining were given advisory notes outlining the morals of the Muslim faith, to avoid embarrassment. These powerful ships operated efficiently ,without incident.