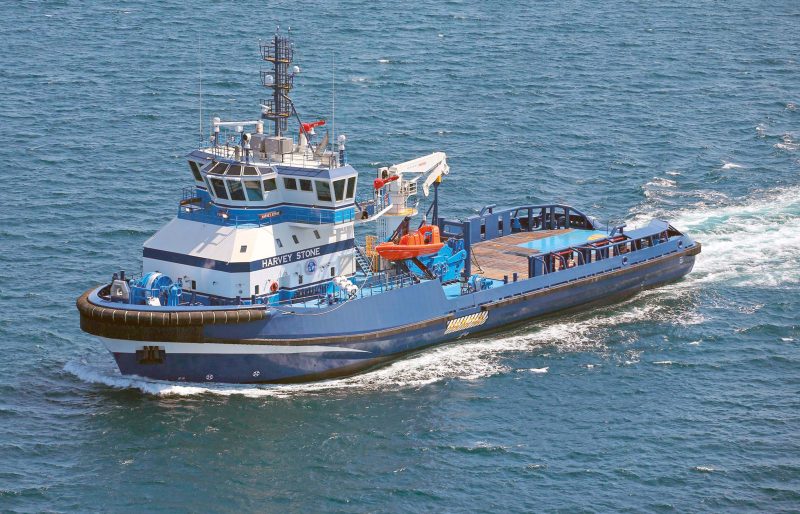 The plethora of Offshore Services related vessels continues to grow despite the stagnation and even constriction of the industry since the fall in oil prices. Vessels are being laid up and previously buoyant companies are fighting for survival, but the industry as a whole marches on. Having more than one string to your bow helps tremendously so the multipurpose vessels have a better chance of maintaining employment around the globe. One such newbuild was delivered on 29th August 2016 to Harvey Gulf International Marine, LLC of New Orleans, Louisiana, U.S.A. Built as Hull No. 234 by Eastern Shipbuilding Group, Inc., the Harvey Stone is a RAmpage 6500-ZH hybrid Multi- Purpose Field Support Vessel (MPFSV), designed by Robert Allan Ltd. of Vancouver, B.C. The same shipyard was also completing MPSVs Harvey Sub-Sea (delivery 2016) and Harvey Blue-Sea (delivery 2017) from a design provided by VARD Marine. Founded in 1955, Harvey Gulf International Marine is a marine transportation company that specialises in towing drilling rigs and providing offshore supply and multi-purpose support vessels for deep-water operations in the U.S. Gulf of Mexico. In December the company website displayed a fleet of 57 PSVs (Platform Support Vessels), 3 MPSVs (Multipurpose Support Vessels) and 5 FSVs (Fast Support & Utilty Vessels). This total included vessels under construction. The latest MPFSV was not shown in this total, suggesting the information was outdated. Harvey Gulf can trace its history back to 1955 when Captain Numa J. Guidry assembled a fleet of inland towing vessels to service the Gulf Coast transportation market and called his company Harvey Canal Towing Company. Ten years later, Captain Numa’s two sons joined the family enterprise and helped expand the company into the offshore ocean towing and rig moving industry. The company’s name was changed to reflect the new direction: Harvey Gulf International Marine, Inc. From the early 1960’s to the late 1990’s, Harvey Gulf maintained and operated a fleet of both offshore, and inland towing vessels that towed, among other things, jack-up and semi-submersible drilling rigs, bulk cargo barges, and large structures and facilities loaded on barges. The company also regularly towed liquefied natural gas (propane) filled barges from Louisiana to ports in the Caribbean, U.S. East Coast and U.S. Gulf of Mexico. In 1988, Shane J. Guidry became the third generation of the Guidry family to run the family business and became President and CEO in 1997. As the years progressed, Harvey Gulf transitioned from a full-service towing operator to one specialising in offshore towing in the Gulf of Mexico. As part of this specialisation, Harvey Gulf divested the company’s liquefied petroleum gas division, sold all of its inland towing vessels and replaced them with larger, more powerful offshore towing vessels. From 2003 the ongoing fleet expansion included Offshore Supply Vessels. On 21st August 2008, Mr. Guidry, along with The Jordan Company, L.P., a New York based private equity firm, acquired Harvey Gulf from the Guidry family with Mr. Guidry remaining as Chief Executive Officer. In 2015 the first of six dual fuelled LNG powered OSVs was delivered in the form of the 4,458gt Harvey Energy. These vessels became the first to use LNG as a fuel in the U.S.A and all achieved “ENVIRO+, Green Passport” Certification by the ABS, which made them the most environmental friendly OSVs in the Gulf of Mexico.