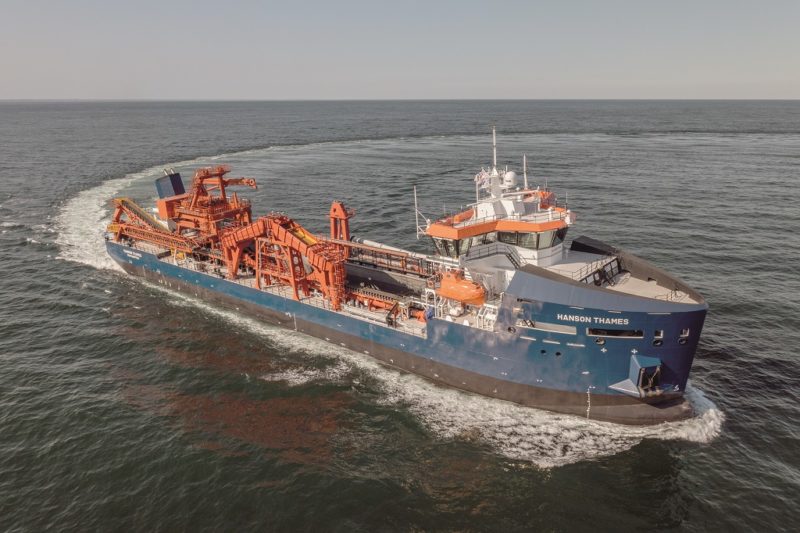 The Marine Aggregates sector is a vital part of the shipping scene around the shores of the U.K, supplying the construction and highways industries with various grades of stone (shingle/ballast) and sand. A variety of dredging vessels perform these tasks in designated areas, bringing the dredged material ashore at ports such as Shoreham, Southampton, Portsmouth (a new cargo flow for the commercial port), Cowes, Poole and Dagenham.

The 21st Century has welcomed a new era of dredger newbuilds that also feature economical and environmental characteristics which are now commonplace among new ships. Once again, Damen Shipyards Group has been at the forefront of bringing new designs to the table with their Marine Aggregate Dredger (MAD) 3500 and 5600 Trailing Suction Hopper Dredger (TSHD) variants. Damen developed this dedicated range of MAD vessels for the offshore mining of sand and gravel with particular attention paid to the optimisation of the hull design, which has resulted in the aggregate dredgers having excellent seakeeping performance. The enclosed bow of Damen’s offshore design shape ensures that these vessels can operate in harsh weather conditions, and protect their cargo from water ingress. Whilst similar in size to 20th century equivalents, the MAD 3500 is a completely new class that is said to represent a quantum leap forward in terms of both the quantity of product it can carry (20% more) and operational costs, thanks in part to the latest fuel-efficient propulsion systems and the ability to conduct operations while running on a single engine. During the process of finalising the MAD range, the design team at Damen sought input from experienced operators in the sector as well as from its own repair yards, which have been maintaining dredgers for many years, and its dredging mission equipment production subsidiary. The MAD 3500 is also designed to operate 24 hours a day, 7 days a week with just 9 crew. At any one time, dredging can take place with only two personnel on the bridge plus an engineer on duty. Unloading the entire vessel can be achieved in just 2-3 hours and is fully automated. The in-house designed trailing pipe, underwater dredge pump and screening towers ensure efficient dredging operations with an ability to also autonomously unload the dry cargo to shore and any port that can accept this size of vessel. The MAD series boasts several innovations to make operations safer and more efficient, resulting in the lowest cost per tonne of dredged material. The Damen designed draghead, underwater pump integrated with the trailing pipe and screening towers, plus two adjustable loading boxes, ensure efficient operations both at sea and in port.

A key part of the technology installed onboard the MAD 3500 is the modular screening tower which allows material brought up from the seabed to be sorted as it comes aboard rather than once it reaches land. This enables the vessel to retain only the grades of aggregate that are in demand while returning the rest to the seabed. The mooring system also sets a new standard, being designed around flow lines to ensure safe and efficient mooring at all times, whilst the addition of telescopic spud poles allows the MAD 3500 to hold position without the use of lines or the need for constant adjustment. As can be seen on each ship, the dredge pipes are situated above main deck level for safety, as well as easy inspection and crane reach, and the modular construction of the dredge systems ensures quick and easy replacement of worn parts of the piping and screening installation. This, in turn, is supported and enhanced by the use of Damen’s Triton remote-monitoring and analysis system that allows continuous optimisation and pre-emptive maintenance, which is achieved using ship-wide sensors to deliver operational data to both the bridge and managers onshore for real-time analysis. The hopper dredger is designed for mining marine aggregates at 55 metres below sea level. The submersed Damen dredge pump is directly driven by a continuous 1,400kW electric motor, i.e without a gearbox in between. Moreover, the electric motor forms an integral part of the trailing pipe structure. This air-filled motor is of the Permanent Magnet type and usually functions at 25 metres below sea level, approximately midway on the trailing suction pipe. Overall, the Damen MAD range has a dredging depth of up to 70m, a hopper capacity of 3,000-8,000 m3, a deadweight of 6,000-16,000 tonnes, a trailing pipe diameter of 700mm-900mm, a hull length of 90m-150m, a moulded beam of 16m-25m and a service speed of 11-15 knots.

Hanson Thames is our New Build this month.