Halifax is a city on the western shore of a deep inlet approached directly from the North Atlantic, after rounding Chebucto Head on the Halifax side or Hartlen Point on the Dartmouth side. A ship then enters one of the finest harbours in the world. It is a terminal port of call for shipping for all of the year, and during the closed St. Lawrence winter season, an ice free winter port for many Transatlantic cargo lines. The port of Halifax in Nova Scotia also has an important naval base and dockyard, a commercial shipyard, and has several claims to fame, including the birthplace of Samuel Cunard (1787-1865), founder of Cunard Line. Samuel Cunard began a steamboat service from Halifax to Dartmouth in 1836, and the Cunard Line paddle steamer Britannia began the first mail service between Liverpool and North America four years later. A massive explosion in 1917 equivalent to the power of an atomic bomb after a collision in the harbour destroyed most of these facilities and killed two thousand people, and the harbour was also the sailing point of most of the vital convoys in two World Wars to brave the U boat ‘wolf packs’ of the Battle of the Atlantic and sustain the war in Europe against Nazi Germany.

The port with its excellent natural harbour is used today by some 1,500 breakbulk, bulk, ro-ro, container ships and tankers, creating around 11,800 jobs locally and an estimated economic impact of CAN$1.6 billion. One quarter of a million cruise passengers in 140 cruise ships of the leading cruise lines in the world arrive annually to visit the many tourist facilities, and spend an estimated $104.3 million in the Halifax area. In the last five years, $250 million of investment in the port from the private sector has been made, of which the Halifax Port Authority (HPA) has invested over $100 million. There are over a dozen major terminals in the port for the container, timber, grain, gypsum, and crude oil and oil rig repair and service industries, of which nine are owned by the HPA. The port handled 8.6 million tonnes of cargo during 2013, with the bulk cargo total being the largest, followed by container traffic, crude oil, breakbulk and ro-ro and project cargoes. 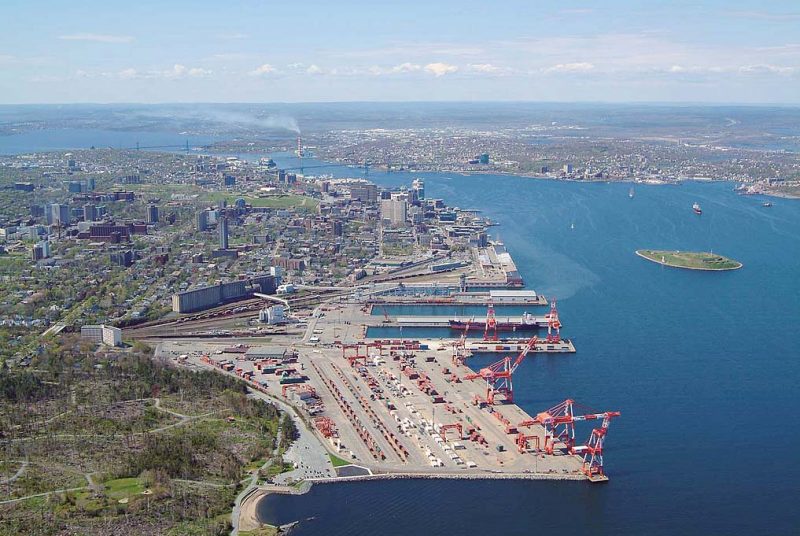 The indigenous Mi’kmaq North American native people lived in the area for thousands of years before the first Europeans arrived. The French explorer Samuel de Champlain visited the harbour in 1605, but the town was not founded until a century later when it became a small French fishing port. In 1749, Colonel Edward Cornwallis, an Englishman, founded Halifax at what is today Barrington Street, which runs from the Downtown district to the North End district. The destruction of the French fortress at Louisbourg in 1760 increased British dominance of Nova Scotia and made Halifax its most important city. Cornwallis named the small town after the Second Earl of Halifax, President of the Board of Trade and Plantations.

The first naval dockyard in Halifax opened in 1758, and the port became one of the most fortified of Royal Naval bases outside Britain until the Canadian Government took over the Royal Navy base in 1906. The fortress at the top of Citadel Hill, the highest point of the town, lies up Duke Street and George Street, and today is the most visited national historic site in Canada. The fortress is star shaped and is the fourth such construction on the site, construction of the first began in 1749. Visitors have free admission with guided tours around the beautiful grounds of the site when the galleries of the museum are closed. 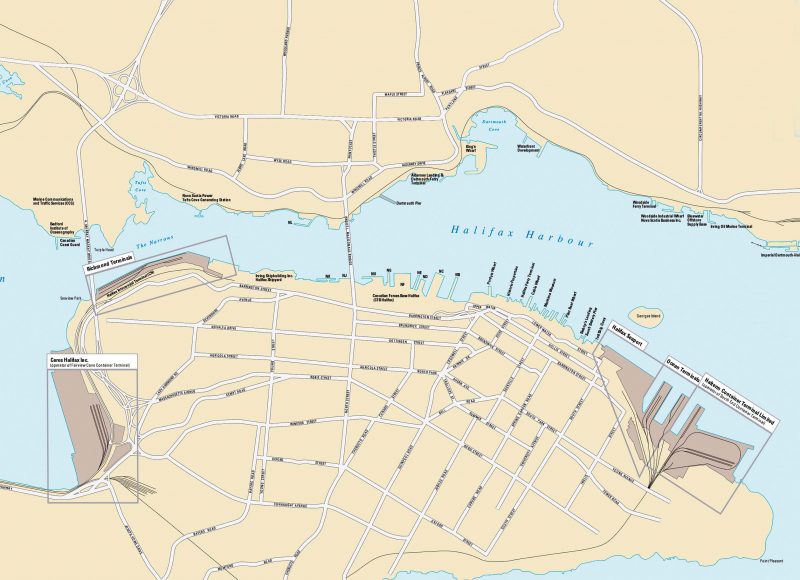 Two universities were founded in Halifax in the early 1800s, and with the invasion by British forces in 1812 of several parts of the United States of America, Halifax became an important British supply base with a vigorous black market trade. In 1818, Halifax became a ‘free port’ and allowed foreign ships to move cargo in and out of the port. The Halifax Citadel Clock Tower began keeping time for the town on 20th October 1803, with the clock mechanism constructed by respected Royal Clockmakers based in London. This three storey white painted building was erected on the eastern side of Citadel Hill facing Brunswick Street, with four faces displaying Roman numerals, and the ‘4’ shown as Roman numeral ‘IIII’ not as ‘IV’. The clock is near the top of an octagon shaped tower on top of a ground floor base of classic Palladian proportions. It was built to give all workers in the Dockyard and in the town the time of the day by simply glancing up the hill. The ground floor has been used in the past as a guard room and a residence for the clock caretaker, but the last caretaker ceased his work in 1965, with the clock mechanism today wound twice weekly by Citadel Hill National Historic Site employees. By the mid 1850s, Halifax had become an important seaport and military town, thronged with British soldiers and seamen of all nationalities visiting the local hostelries.

In 1872, the Intercolonial Railway connected Halifax to the rest of North America, and eight years later the Intercontinental Railway opened the Deep Water Ocean Terminus, a dock with berths for a dozen ships simultaneously. In 1874, the Royal Navy survey ship Challenger called in at Halifax on her return voyage after spending two years collecting seabed and other samples of marine creatures in the Antarctic. She had in her laboratory some five thousand items of seabed creatures in 563 large cases, 2,860 glass jars and 176 metal tins, all preserved in spirit for further scientific research when she reached home. The grain elevator and part of the Deep Water Ocean Terminals were destroyed by fire in 1895. Imperial Oil opened its first berth at Dartmouth in 1898 for the import of oil.

Port of call this month is Nova Scotia's, Halifax