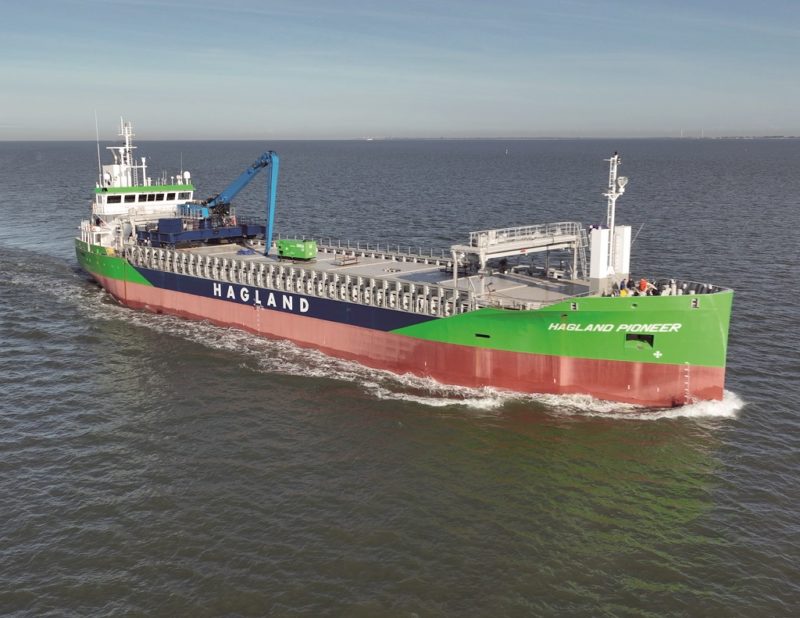 Hagland Shipping, part of Hagland Bulk Transport KS, of Norway took delivery of the first in a series of three new battery-hybrid self-unloading bulkers from Dutch shipbuilding company Royal Bodewes in The Netherlands on 21st October. The first order for two such newbuilds was placed on 8th April 2021 with a third sistership being ordered at the end of February 2022. These newbuilds have zero emissions whilst in port and achieve a substantial reduction of emissions whilst underway at sea. Hagland Shipping aims to achieve greener short-sea shipping through reduced local and global greenhouse gases and reduced noise. The third ship is scheduled to be delivered mid-2023 whilst the first two sisterships were scheduled for delivery autumn 2022 and early 2023.

Together, the trio of newbuilds will replace older ships in Hagland’s fleet that are equipped with traditional propulsion systems. The ships are also prepared for zero-emission technology and satisfy IMO TIER III requirements. The total investment for each ship was in the regions of NOK 150 million ($16.8 million), totalling NOK 430 million for the series of newbuilds. The newbuilding contracts were entered into on the basis of substantial support from financial technology company ENOVA (the Norwegian Ministry of Climate and Environment’s organisation aiming to reduce emissions and develop energy and climate technology), which has been instrumental in the realisation of the project. The investment was also supported by the fleet renewal programme for short sea shipping. Hagland Shipping was established in 1983, and has since developed into a fully integrated ship-owning/operating company with a fleet of self-discharging dry-cargo vessels.

At the time of writing, the fleet consisted of 13 vessels, of which six were owned by Hagland and seven were on time charters, plus the two newbuilds expected in 2023. The fleet members were listed as:-

The fleet of ships are all dry-cargo self-dischargers, but the company has experience from other segments in the industry. Typical cargoes include timber, pulpwood, woodchips, sand, gravel and other stone products, as well as a number of other bulk cargoes. The majority of cargoes involve rock materials, sand and limestone with timber/woodchips being the second most prevalent cargo. The main operating area is in the North Sea and Baltic in the short-sea trade. The ships operate around 1,100 voyages per year, encompassing 250 different ports and around 2,500 port calls.

The company can trace its roots back to 1872 when Rasmus Gautsen Hagland established himself as a shipowner and shipbroker. In 1884 a hurricane in Iceland destroyed Hagland’s largest ship, the brig Norden, which lead to financial difficulties. In 1927 the company was taken over by the Aanensen family when Rasmus G. Hagland passed away. In 1950 the next generation of the family expanded the business, focussing on sale and purchase deals and newbuilding orders. Further expansion followed and, in 1983, Hagland also acted as broker for its first chemical tanker. In 2007 a fleet renewal and expansion programme commenced for Hagland Shipping with further growth in 2011. In 2012 newbuilds were delivered and in 2018 RG Hagland Shipbrokers and North Sea Shipbrokers joined forces in the renewables market. In 2019 came the rebranding of the shipbroking services in Haugesund, Esbjerg, Hamburg and Aberdeen with the new generation of ‘green’ newbuilds being ordered in 2021. The present-day Hagland embraces international shipbroking, shipowning, marine agencies, business management and accounting services and real estate. The company, with headquarters in Haugesund, Norway, is owned by brothers Arne and Knut Wendelbo Aanensen, representing a third generation of Aanensen family ownership.

Read about the new build from a company that can trace its roots back to 1872 and Rasmus Gautsen Hagland.