Located on the Polish Baltic Sea shore, Gdynia is the country’s third-largest port. Its construction in the 1920s was designed to secure Poland’s access to the sea. Today, even though it is preceded by Gdansk and Szczecin, Gdynia remains a port of strategic importance, with the Polish government aiming to develop its infrastructure and implementing a major modernisation programme for the country’s naval forces, with a large portion of the Polish Navy concentrated in Gdynia.

Located in close proximity of Gdańsk, which today is the largest city and port in Poland’s norther region of Pomerania, Gdynia has traditionally served as the country’s main outpost on the Baltic Sea shore. The city is one of the leading forces behind the economy of Poland’s northern Pomerania region, and one of the three components of the Tricity (Trójmiasto) area, together with the neighbouring cities of Gdansk and Sopot. With a population of some 248,000, Gdynia is the region’s second most-populated city, preceded by Gdansk, with more than 460,000 residents. What is noteworthy, is thar Gdynia is also the largest Polish city which is not serving as a capital of one of Poland’s 16 regions. 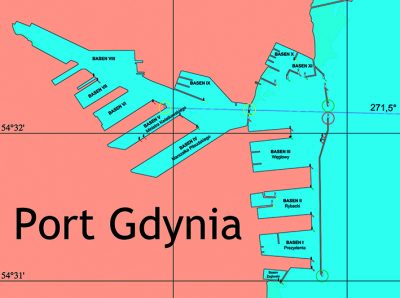 Following the First World War, Gdańsk found itself under the mandate of the League of Nations, stuck between Germany and Poland. Although shipments of goods passed through the city, and Gdańsk was integrated into Poland’s customs zone, it did not remain under the control of Polish authorities, and thus the government in Warsaw believed it needed a second port to secure sufficient access to the sea for both commercial and military purposes, Gdynia. The war, which pitted Poland against the Soviet Union in 1920, during which Poland experienced significant difficulties in obtaining deliveries of arms and military equipment through Gdańsk, further convinced Polish decision-makers of the necessity to create a second outpost on the Baltic Sea shore.

The government made an official decision on the construction of a new port in October 1920, and in September 1922, the Polish parliament passed a bill which paved the way for the construction of a new port in Gdynia, located 16 km from the port of Gdańsk. The project would not have been completed if not supported by the Polish military, a major political force in the 1919-1939 period. Vice-Admiral Kazimierz Porebski was one of the leading lobbyists for locating the new port in Gdynia, and his efforts to convince government officials in Warsaw to give a green light to the investment are said to be crucial to the project’s launch.

The works on locating and designing the port were led by Polish engineer Tadeusz Apolinary Wenda, who also oversaw the works on constructing and expanding the facility by 1932. At government level, Poland’s Minister of Economy Eugeniusz Kwiatkowski, who held the post in the years 1926 to 1930, was considered as one of the leading political figures who facilitated the construction of the expanded port of Gdynia.

Several months later, in April 1923, the first phase of the investment was completed and officially launched in the presence of Polish president Stanislaw Wojciechowski and Prime Minister Wladyslaw Sikorski, and in August the port welcomed the first foreign ship, the Kentucky. The next phase of the Gdynia-based investment was launched in July 1924 with the signing of an agreement between the Polish government and a French-Polish consortium under which the port was to be significantly expanded. In the next years, the port experienced a period of rapid modernisation and development. In March 1930, in another important step for the port, the first regular passenger line between Gdynia and New York was opened, confirming Gdynia’s role as Poland’s main maritime transport hub.

The military support provided to expanding the port in Gdynia gained further importance in 1926, when, as a result of a coup d’etat, Marshall Józef Piłsudski took power and became Poland’s head of state until his demise in 1935. Porebski and Julian Rummel, Polish engineer and the chief executive of Polish maritime operator Zegluga Morska in the years 1926 to 1932, worked together to convince Piłsudski on the need to develop the port of Gdynia and its key importance to securing Poland’s access to the Baltic Sea.

The port on the Polish Baltic Sea Shore is featured this month.