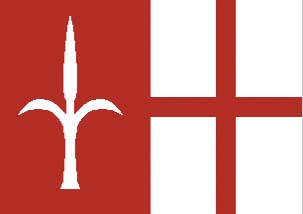 Lloyd Triestino was founded in 1919 and soon built up services to the Eastern Mediterranean, India, Australia, East Africa and the Far East. The twin funnelled liner Victoria of 13,098 grt was launched on 21st June 1931 at Trieste and when completed was the fastest motorship in the world at 23.25 knots. She was also unique in being the first passenger liner to have her Dining Room on ‘A’ Deck at the top of the accommodation, and she served on the East Mediterranean, Bombay and Far East routes. After the loss of almost all of their fleet during World War II, the company was able to resume passenger and cargo services to East Africa in 1948 with one ship calling at Mombasa, Dar es Salaam and Beira (Sofala). Their Australian service restarted on 19th October 1948 when the former Saarbrucken of NDL of Germany, one of three sisters built in 1923 of 9,442 grt, sailed as Toscana from Genoa to Melbourne and Sydney. She was an unusual looking liner as she had a corrugated hull with long side sponsons, and was joined on charter in 1949 by the Italia Line sisters Sebastiano Caboto and Ugolino Vivaldi of 9,744 grt.

This Italia Line trio maintained the company service to Australia for the next two years until the company reputation for speed was restored with a new trio of 18.5 knot fast liners of 13,140 grt was completed with air conditioned accommodation for 719 passengers in three classes as Australia, Oceania and Neptunia. Toscana was then altered to carry 819 assisted migrants with no passengers paying full fare, and her homeward passage was cargo only, and she remained in service until her final sailing from Genoa to Australia on 18th August 1959. She was withdrawn from service and laid up in December, 1960 and arrived at a scrapyard in Genoa on 21st February 1962. The new trio of liners carried some assisted migrants in third class, and their forward well deck was plated over in 1959 to give a similar appearance to their four other sisters on the East African and Far East services. They reached Sydney from Italy after a voyage of 31 days, and an order was then placed for two flagships for the company for delivery in 1963 to cut the voyage time by eight days on the Australian service and they are the subject of this article.