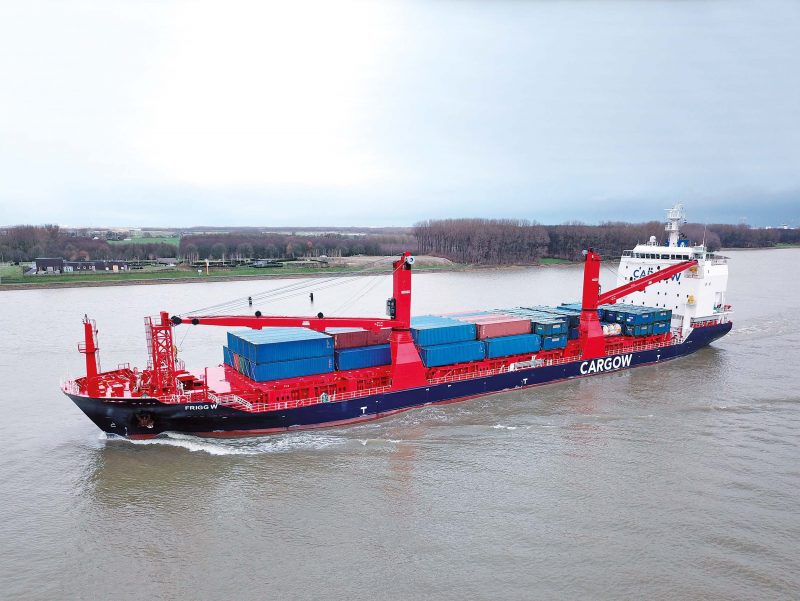 Much attention has been given to the major Players in the world of container shipping in recent years with the race to exceed the 20,000 TEU capacity barrier and beyond, plus who can take the crown as operating the largest ship in terms of capacity, size or both. However, the small and medium sized container vessels also deserve more of the limelight than they receive as their role is vital, especially in the short sea and feeder sectors of the industry. If anything, the feeder services are on the increase with new services coming to the North Sea recently from companies such as Samskip whilst even P&O Ferries now offer a Lo/Lo service from Hull. One of the younger operations in European waters is Cargow BV of Rotterdam, The Netherlands. The company was founded in 2012 by Øyvind Sivertsen and Karl Hardarson, both with extensive experience in the shipping industry, shortly thereafter joined by Bjarni Armannsson who brought in banking and financial expertise. Stefan H. Stefansson joined the company in 2014, is currently the Chief Executive Officer and kindly supplied the material for this feature. Cargow provides a transport link between the Continent, Norway, UK, Faroe Islands and Iceland, working with leading professionals in the short sea and deep sea segments. The international aluminium industry is served and, as an industrial carrier, Cargow offers liner services with container, reefer and project cargo capabilities.

In 2017 Cargow looked to increase capacity and introduced the first in a new line of energy-efficient vessels. The initial ship was delivered in the form of a 12000dwt Multipurpose Cargo Vessel for the solid bulk/container trade. The 9,717gt Frigg W is the first of four efficient and more environmentally friendly vessels and is chartered from Million Comets S.A, part of KK Kyowa Sansho of Japan. The contract for the newbuilds was signed on 1st September 2014 and the keel for Hull No. SF140201 was laid on 16th October 2016 at the Taizhou Sanfu Ship Engineering Co., Ltd. shipyard in China. Taizhou Sanfu Ship Engineering Co., Ltd. is a robust large-scale ship-building company and as early as 2006 it was ranked as one of the Jiangsu Top 10 Shipbuilding Enterprises. The yard is on the Yangtze River with the port of Taizhou to the north, Nantong city to the east, Yangzhou city to the west, and several big cities including Shanghai and Nanjing to the south. Established in 1985, the facility includes three factory areas, namely the Kou’an site, Yong’an site and Taixing site. Covering a total area of around 1.5 million square metres with more than 2,000m of natural shoreline along the Yangtze River, the site is perfect for shipbuilding. The shipyard boasts advanced production equipment plus no less than six slipways, among which are one 50,000t/180m long side launching slipway, a 20,000t/140m, 20,000t/170m and 50,000t/190m longitudinal slipway and two 80,000t/250m longitudinal slipways. The shipyard is capable of building a great variety of Bulk Carriers, Container Vessels, Multipurpose Container (MPC) Vessels plus Oil/Chemical Tankers under 100,000dwt. Tugs and Offshore Vessels are also on the product list. At present the principle newbuilds include 6,500dwt Bulk Carriers, 12,000dwt MPCs, 57,000dwt Bulk Carriers, 16,500dwt Product Oil/Chemical Tankers, 16,800dwt Petrochemical Vessels, 92,500dwt Bulk Carriers and 16,900dwt Bulk Carriers. Output from the yard is generally 18-24 ships per annum with Clients worldwide. The Limassol registered Frigg W was launched on 2nd March 2017 and delivered on 10th October 2017 following fitting out and sea trials. The ship then proceeded to the Port of Nangtong in China and, on 21st October 2017, departed on her delivery voyage to Rotterdam. To make the best use of this voyage the ship was chartered out and carried her first cargo on a 94-day passage that took her to Qingdao, Zhanjiang, Fuzhou and Zhuhai (all in China) and onwards via Singapore and Cape Town for bunkering before her final calls in Nouadhibou, Caronte and Vigo. The Frigg W subsequently sailed Vigo-Rotterdam to complete her conveyance to her new home and was christened jointly by four Godmothers on a wet 31st January during a ceremony at Rotterdam’s Wilhelminakade. The ship’s name is linked to the Old Norse word Frigg referring to a Goddess or Lady, other spellings including Frija (Old High German), Frea (Langobardic), and Frige (Old English). Many sources also describe Frigg as the wife of the god Odin or having a connection with the goddess Fulla. The three sisterships will follow in due course.