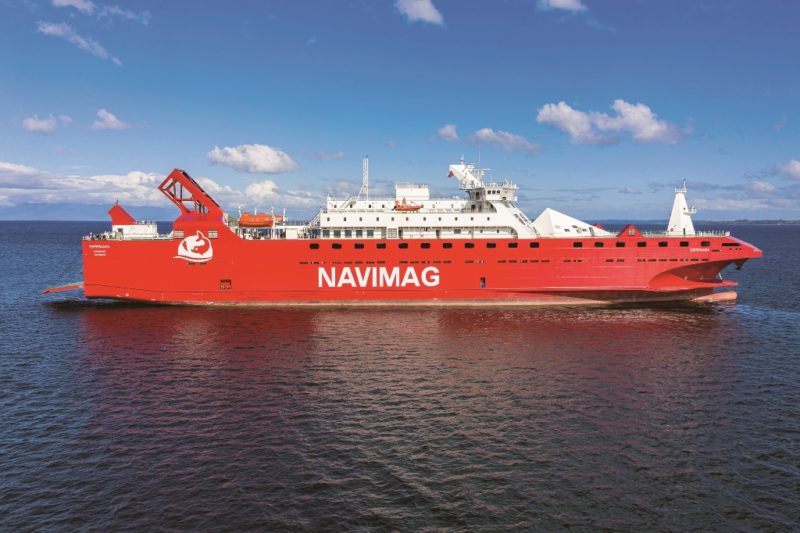 Every so often a completely different design of an otherwise reasonably standard type of ship emerges onto the scene, often accompanied by that well-known “marmite affect” of “love it” or “hate it.” Well, with all the furore around the globe created by the pandemic in 2020, a striking new design of Ro-Ro ship was quietly delivered in August 2020. The ship has well and truly broken the mould but there is definitely a method to her creation.

The newbuild was instigated by Navimag (Naviera Magallanes S.A.), a ferry operator in Chile that operates two routes in Patagonia carrying passengers and vehicles. One service plies between Puerto Montt and Puerto Natales, calling at Puerto Eden (a 4-day voyage) and the other links Puerto Montt with Puerto Chacabuco. The company also offers services from Puerto Montt and Puerto Chacabuco to Laguna San Rafael. Navimag was formed in 1979 when cargo services between Puerto Montt and Punta Arenas commenced. Passenger services to Puerto Natales and Laguna San Rafael were added in 1985. The Ro-Ro services are the primary means of connecting the Aysén and Magallanes regions with the rest of Chile. The main passenger service operates October-April when travellers can marvel at the scenery of the Patagonian Fjords. The Puerto Montt-Puerto Natales voyage offers a view of distant glaciers, dramatic cliffs, wind-sculpted forests and snow-capped volcanoes. Highlights also include the open sea passage on the Golfo de Penas (Gulf of Sorrow), passing through Angostura Inglesa, calling at Puerto Eden and seeing the coast of Chile’s national parks, including Corcovado, Isla Magdalena, and Laguna San Rafael. The ships sail Puerto Montt-Puerto Natales every Saturday and Puerto Natales-Puerto Montt every Wednesday. Until now, Navimag has operated a somewhat eclectic fleet of secondhand Ro-Pax and Ro-Ro vessels, with the passenger capabilities often added to Ro-Ro purchases where required. In 2000 the 2,574gt/1977-built former Maersk Flanders joined the fleet and was converted from a Ro-Ro ship to a Ro-Pax, emerging as the 9,951gt Magallanes. She was later renamed Evangelistas in 2007. Built as the Admiral Atlantic, the ship also carried the names Romira, Duke of Flanders, Maersk Friesland, Friesland, Magallanes and Evangelistas and was sold for demolition at Alang in 2020 and sailed there as the Angelis. The 3,563gt/1976-built Amadeo 1 joined the fleet in 2008 and was built as the Seaspeed Dana. She saw North Sea service, also whilst named Dana and as Calibur 2003-2007 when operating for Ferryways to Oostende. Other names included Stena Mariner and Excalibur.

On 18th August 2014 the Amadeo 1 came to grief whilst en-route to Puerto Montt when she struck a rock in the Kirke Channel near Puerto Natales. The incident caused the starboard side hull to be breached and the ship slowly capsized. Sadly, she was carrying livestock among her cargo, most of which perished. In 2015 the ship was deemed unsalvageable and was scuttled to a watery grave in 2,700m of water off Diego de Almagro Island, Chile on 21st September 2015. At this time the Evangelistas was operating the Puerto Natales service with the 13,977gt/1984-built Ro-Ro ship Eden serving Puerto Chacabuco. The latter was built as the Monte Cinto for SNCM, passed to Baja Ferries in 2010 and then to Navimag in 2014. In 2016, Navimag purchased the 6,719gt/1993-built Ro-Ro ship Trinidad I to join the fleet. Formerly the Amber 1, she was refitted in Rijeka, Croatia, before joining the company. The 7,765gt/1983-built Ro-Ro ship Coyhaique also joined Navimag in 2016 and, like other ships to serve, had a history with European/UK services. Built as the Balder Vik, the ship also served under names including Bazias 7, Stena Topper, River Lune (Belfast Freight Ferries/Norse Merchant Ferries) and Hansaland (Ferryways/Smyril Line). As a further reminder of the harsh environment that the ships navigate in, during the early hours of 3rd July 2019 the Coyhaique got into trouble whilst en-route from Puerto Chacabuco to Puerto Montt. She was carrying 19 passengers, 18 crewmembers plus 244 cattle among the cargo. Everyone was evacuated (except the Captain, who reportedly committed suicide) and a huge rescue effort followed to save the cattle, with all but 17 surviving. The ship was crossing the Moraleda Canal, Puerto Aguirre, in the Aysén Region when she grounded off Isla Melchor, causing water ingress to the engine room. In October 2019 the 11,866gt/1990-built Ro-Ro ship Dalka joined the fleet having previously operated for Cobelfret/CLdN from new as their Cymbeline. The ship was a regular at Southampton, Zeebrugge and Purfleet before being replaced by new tonnage.

The newbuild, Esperanza, was instigated by Navimag, a ferry operator in Chile.