Newbuild of the Month 14th September 2021 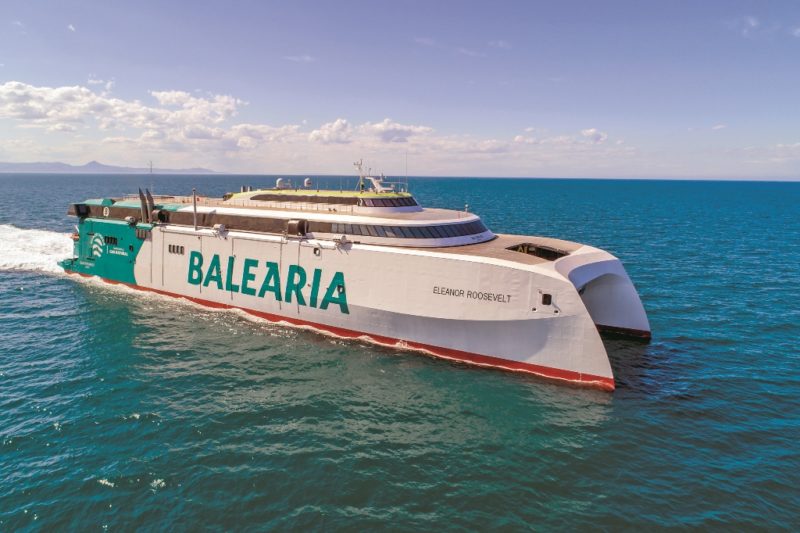 Incat Crowther has an impressive array of fast ferry designs in its portfolio and its largest yet is the Incat Crowther 123 passenger and vehicle catamaran, delivered to Spanish ferry operator Balearia in May 2021. The Marine Engineering Design company was created from a merger of Incat Designs (Sydney) and Crowther Designs in 2005. Crowther Designs had a history in catamaran, trimaran and commercial vessel design whilst Incat Designs (Sydney) was formed in 1988 with its roots going back to 1977 when a partnership, namely International Catamaran Pty Ltd., was formed to design and build catamarans in Tasmania. This combination made significant advances in fast powered catamaran technology culminating in the wave piercing catamarans. In early 1988, the shipyard partnership was mutually terminated and a design-only company was formed, later to become Incat Designs (Sydney) whilst the other partner from International Catamaran Pty Ltd. was Robert Clifford, who then commenced designing and building under a new company, Incat Tasmania Pty Ltd. Worldwide, over 600 vessels built to Incat Crowther designs have been delivered to date with examples in the U.K to be found serving Red Funnel Ferries (363gt/2016-built Red Jet 6/363gt/2018-built Red Jet 7) and members of the Uber Thames Clippers fleet including the 172gt/2019-built Venus Clipper.

The new ground-breaking vessel was ordered by Spanish ferry operator Baleària, which is the trading name for Baleària Eurolíneas Marítimas S.A. The company operates passenger ferry services in the Mediterranean and Caribbean and was founded by Adolfo Utor Martínez in 1998. In The Mediterranean services include domestic routes within Spain to the Balearic Islands (Mallorca/Menorca/ Formentera/Ibiza) from Dénia, Valencia and Barcelona plus international services across the Strait of Gibraltar from Algeciras to Ceuta and Tangier in times when there are no pandemic restrictions or political squabbles. Baleària also operates a regular international ferry service between the port of Fort Lauderdale, Florida in the U.S.A and Freeport, Grand Bahama Island, Bahamas. The number of vessels in the fleet fluctuates but in 2021 fleet strength was 24 for the European and USA operations combined. The fast ferry newbuild was ordered in October 2018, formally announced on 1st November 2018 and was unveiled at the FITUR international tourism fair in Madrid in January 2019. The striking profile of the Incat Crowther 123 design reminds the Writer of the Stealth Ship (Sea Dolphin II), a fictional radar and sonar resistant catamaran-style stealth vessel constructed by media mogul Elliot Carver, the villain in the 1997 James Bond film Tomorrow Never Dies. This vessel had herself been inspired by the hi-tech stealth vessel built by the U.S Government in 1984, was named Sea Shadow. She undertook stealth characteristic trials for future naval programmes and it was 9 years before her existence was revealed to the general public. There are also shorter versions of this design in operation/in-build from Austal in Australia. The very first was Molslinjen’s 11,345gt/2019-built Express 4 (Hull 393/Auto Express 109 design), larger 115m and 13,859gt/2022-built sister vessel Express 5 (Auto Express 115 design), Trinidad & Tobago’s 6,542gt/2020-built A.P.T James (Hull 397/Auto Express 94. design) and the 11,888gt/2021-built Fjord FSTR (Hull 419/Auto Express 109 design). Besides being the first 123m long variant (stated as the world’s longest fast ferry), the Balearia newbuild would also be the world’s first very large catamaran Ro-Pax ferry powered by dual-fuel reciprocating engines. To add to the ‘Firsts’, the €90 million ferry had the name Eleanor Roosevelt bestowed upon her as a tribute to the writer, gender equality activist and advocate for the civil rights of African and Asian Americans and refugees from World War II that was Anna Eleanor Roosevelt (11th October 1884-7th November 1962), an American political figure. She served as the First Lady of the U.S.A from 4th March 1933 to 12th April 1945 during her husband President Franklin D. Roosevelt’s four terms in office, making her the longest-serving First Lady of the U.S.A. She also served as United States Delegate to the United Nations General Assembly 1945-1952. The Eleanor Roosevelt is Balearia’s 6th ship to pay tribute to pioneering women in their respective disciplines, in accordance with their commitment to one of the sustainable development goals, equality and the empowerment of women.

The other fleet members to carry names in this series are as follows:

The 5,989gt/1999-built Cecilia Payne, named after the Anglo-American astronomer and astrophysicist Cecilia Payne (born 1925), whose thesis was a major breakthrough in the study of the stars, as she was the first person to determine that they are composed primarily of hydrogen. This Austal-built craft was previously Irish Ferries’ Jonathan Swift.

The 26,375gt/2010-built Hedy Lamarr, named after the Austrian woman who invented the first version of the spread spectrum that enabled long-distance wireless communications. She was also an actress and director. This Ro-Pax ship was previously the Visemar One.

The 28,658gt/2019-built Hypatia de Alejandria, named after the philosopher Hypatia, a native of Alexandria in Egypt, and a teacher at the city’s Neoplatonic school. She excelled in astronomy and mathematics, and improved the design of the ancient astrolabes, instruments for determining the position of the stars, which were widely used in navigation.

The 28,658gt/2019-built Marie Curie, sister to the Hypatia de Alejandria, was named after the famous scientist, born as Maria Skłodowska on 7th November 1867 in Warsaw, Poland. Her work included the discovery of polonium and radium.

The 33,958gt/1999-built Ro-Pax Rosalind Franklin carries the name of the outstanding English scientist who, thanks to her chemical research into the structure of DNA, contributed to significant breakthroughs in genetics. The ship was built as the Stena Seapacer 1 and became Finnlines’ Finnclipper before charter to Balearia in 2018.