Newbuild of the Month 9th February 2021 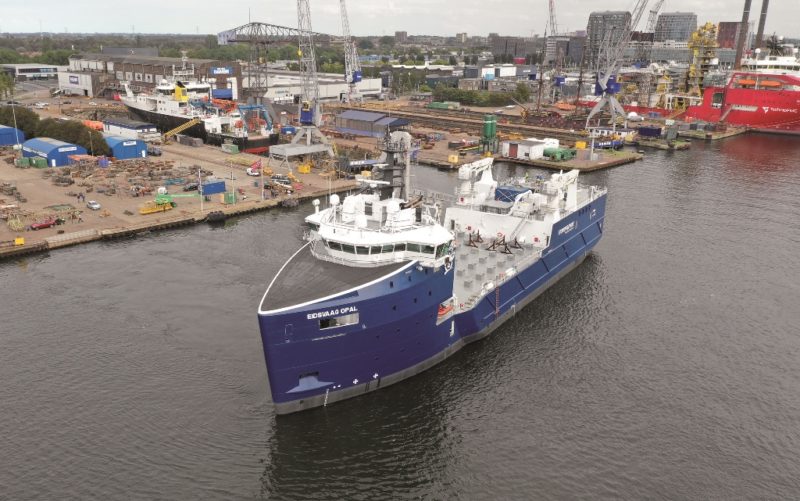 As has been mentioned before, the Offshore Oil and Gas Industry has taken a hammering in the last few years, the downturn arriving just when order books were full of Platform Supply Vessels (PSVs) among other associated vessel types, including many new designs. Compounding factors include historically low oil prices, halted exploration projects and reduced production. This vicious circle is completed by a substantial drop in support vessel day rates. Damen Shipyards Group entered the second decade of the new millennium with a brand-new PSV design, the 3300 CD. This new breed was 80.10m long with a 16.20m beam, 6.15m draught with a speed of 13.6 knots. The 3,017gt PSV had a deadweight of 3,330t and was propelled by two CAT C32 generator engines, each 994 ekW at 1800 rpm, powering two SRP 1215 FP 1,500kW Schottel GmbH electric thrusters, each equipped with 2400mm fixed pitch propellers in nozzles. The PSV 3300 CD also boasted a 720m2 cargo deck area and a 1,400t deck load at 1m above the deck. The cargo area featured a tweendeck, the forward section of which housed utility and machinery spaces with storage tanks located aft towards the stern for ballast/drill water (1224m3 capacity), service fuel oil (300m3 capacity), potable water (769m3), fuel oil & base oil (1028 m3 capacity), liquid mud/brine (860m3 capacity) and 250m3 of dry bulk storage.

The first PSV 3300 CD to be launched was the World Diamond at the Damen Galati Shipyard in Romania on the River Danube and she was delivered to her owner, World Wide Supply, in June 2013. The Galati shipyard began co-operating with Damen in 1994, when the latter started subcontracting hulls of cargo vessels to the yard. This liaison worked out very well and in 1999 the shipyard officially joined Damen Shipyards. An ambitious investment plan followed which mainly focussed on the improvement of efficiency and on the working conditions. Damen Shipyards Galati was transformed into a modern and top-quality shipyard and, from then until 2011 when the PSV 3300 CD newbuilds were ordered, the yard had built over 270 vessels, an average of 20 vessels a year. Some of the yard’s most recent work for Damen includes building double-ended ferries for BC Ferries, as featured in a previous Newbuild of the Month. The World Diamond was the first of 4 PSC 3300 CD examples ordered in December 2011 with an option for a further 2 taken up in February 2012. These sleek, yellow vessels were named after gemstones with the other 5 being christened World Peridot/Pearl/Emerald/Opal & Sapphire. All were delivered June-December 2013.

The downturn hit the ship’s Owner, World Wide Supply, hard and in October 2016 the company laid up its last two active PSVs, which had been on charter to Petrobras, namely the World Emerald and World Sapphire, the latter being the last of the 6 PSVs delivered. Their employment ended after the Brazilian flagged vessels operating off Brazil had blocked their use, coupled with the expiry of a 60-day charter extension approved by the Agencia Nacional de Transportes Aquaviarios. The duo had previously been objected to by the Brazilian local tonnage before the annual renewal of the Brazilian Certificate of Chartering Authorisation (CAA) in March 2016 but the contracts were prolonged by 60 days each after Petrobras successfully applied for extensions. The two PSVs were redelivered and sent for lay-up in Cadiz, Spain after barely 3 years of a working life whilst the other four sisterships were already in lay-up. When new, four of the six World Wide Supply PSV 3300s secured long-term contracts supporting Petrobras whilst the remaining two were offered to the North Sea spot charter market.

From Downturn to Diversification

As may be apparent by now, this Newbuild of the Month feature is in fact another in the lesser series of Rebuild of the Month. Recognising the alarming number of relatively new Platform Supply Vessels becoming casualties of the troubled offshore fleets, Damen Shipyards Group announced in 2016 that it had developed a committed response to the redundant PSVs littering quaysides and fjords. The Dutch company’s solution involved converting idle PSVs into vessels capable of taking on roles in alternative sectors such as aquaculture, shipping and defence. New roles include a Container Feeder with one of the most advanced designs being the Damen Live Fish Carrier 8916 for the aquaculture industry. In addition to permanent conversion concepts, Damen also created temporary design proposals that can be applied to vessels originally built by Damen or other shipbuilding companies.

Eidsvaag Opal is the focus of our newbuild feature this month.