From: John Martin, by e-mail

With reference to the May 2016 edition and the article contained therein – ‘Glengarry, a true survivor’, could I just point out the following which I have only very recently become aware of. During the period of her use by the Kriegsmarine as ‘Hansa’ in the 1939-1945 conflict, she did indeed take part in various large scale Baltic evacuations, however, at the very same time, there was in service a further large passenger vessel in the Baltic, being used for the same purpose. This ship confusingly was also called the Hansa!

This ship was originally the passenger ship ‘Albert Ballin’, and was requisitioned early in the conflict for wartime duties. The change of name was required because the ship had been named after her owner who was Jewish, and apparently Hitler himself refused to tolerate her continuing with a name clearly linked to the Jews of Germany or elsewhere.

It now appears nearly certain therefore, that the ‘Hansa’ which took part in the early stages of the fateful ‘Wilhelm Gustloff’ operation was in fact this other ‘Hansa’, and not the ‘Glengarry/Hansa’.

This other ‘Hansa’ was subsequently sunk by a mine near Warnenmunde, but was refloated years later, and continued in service as a Russian passenger liner named ‘Sovetskiy Soyuz’ for many years thereafter.

I hope this clears up any confusion.

From: Nick O’Nion, by e-mail

I have been reading Norman Middlemiss’s excellent article on Holland America Line. I remember visiting the M.V. Dongedyk built in 1929 / 10,942 grt in the Royal Docks London in the early 1960s. Two of her officers showed us over the ship including her engine room but by this time her twin diesels were playing up, she was sold shortly after and renamed Tung Long. She however was in spotless condition.

In her hay day a Hollywood Film producer had missed the ship on a trip to Europe, so he wrote a song “Oh, Oh where have you gone my Dongedyk”.

I believe these was pre second world war, but this ship visit was 50 years ago or so. At that time she was on the Europe. West Coast USA service.

I am writing to you to see if anyone knows where the River Lady II is nowadays. The last I heard of her was in Devon in the 1970s. She belonged to Western Steamship Company.

Regarding your log for August, I recently visited the new maritime museum in Hamburg covering seven floors in the new district of Hafen City. It is well worth a visit, but you will need to allow most of the day for viewing.

From: Capt. Kevin O’Neill, by e-mail

I am in receipt of your July magazine and noted a letter in the editors mailbox regarding the Australian National Line and the River Embley. I spent more than 2 years as second mate on the River Embley and also spending 1 voyage on the River Boyne between 1986 and 1988.

The photo in the mailbox is the vessel on her southbound voyage between Weipa and Gladstone which is what the vessels were designed and built for. The Australian National Line, History and Fleet List 1956-1981 published by the World Ship Society in 1982 gives some good photographs and general discussion. River Boyne on builders trials is shown from ahead on page 2. Details of the Boyne and the Embley are on page 107, 53,900grt and 75,500dwt. The vessels were both coal fired steam turbines with twin boilers and a single turbine. They were coal fired and were ordered in 1980 as yard numbers 1882/1883 from Mitsubishi Heavy industries (built in Japan at Nagasaki but never to return). 1982 the River Boyne floated out and the Embley was about a year later.

The vessels were designed for the Gladstone-Weipa bauxite trade and were fuelled by coal, bunkered at the Gladstone end. The north voyage was in ballast up the inner reef and the south bound voyage loaded usually down the reef to about Cairns then outside into the Coral Sea to discharge the ash before coming back inside the reef for the southern section. The vessels had no bilge keels.

From memory the bunkers were about 2,500 tonnes for the round trip. The swings when I was an officer on board were six weeks during which we would do 3 round trips and the loading at Weipa was 24 hours and the discharge at Gladstone about 3 days.

At the time these ships were operating there were four ships on the run that were coal fired, the other two vessels being the TNT Carpentaria and the TNT Capricornia. These two ships all had the ability to burn fuel oil in the boilers which gave them a greater flexibility.

I have attached a couple of photos and will try to get some of my old items from on board. 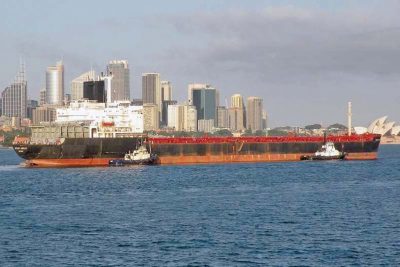 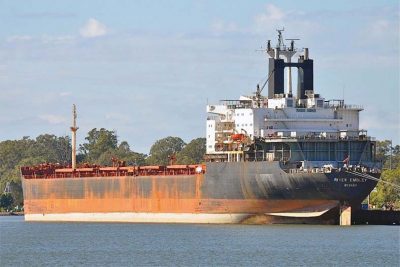 Letters to the Editor from the October 2016 issue