From: Dave Merrifield, by e-mail

I have read with interest, my recent (July 2016) copy of Shipping, and the article on Port Klang, which brought back a few memories! In the early 50s, I was with P&O, as an assistant engineer (as they called their Juniors), and had just paid off the M.V.Palana in Falmouth, when she reverted to Federal Navigation. Following some leave, I was asked to report to Head Office in London, where I was instructed to join the M.V. Somali, berthed at Antwerp. I was to accompany the 1st Electrician, with a number of others to Harwich that night, to travel on the overnight ferry. We arrived next morning, took a train to the docks, to join the ship.

The ship ws alongside loading, being in the middle of what we used to call the “coastal”. I was somewaht embarrassed, as I hadn’t been told in the letter that I would be joining the ship immediately, and had very little luggage! With no boiler suits, uniform, etc, I had to borrow what I could, and spend the rest of the short voyage in my suit! The Somali, with her sister ship Soudan, were 9,080grt, twin screw 6 cylinder centre scavenge Doxford engines, of 13,600hp. Built Barclay Curle in 1948. She had three 8 cyl Ruston engined generators, and one Clarkson ‘thimbletube’ waste heat boiler. She had the cleanest motor ship engine room that I ever sailed in. Apart from a lascar crew, this was partly because she use I.D.O. (industrial diesel oil) as main engine fuel. This was somewhere between distillate and bunker ‘C’ heavy fuel.

Leaving Antwerp, we continued the voyage to Grangemouth, then back to London. We had a bit of excitement on arriving in London docks, as the moment the gangway was lowered, a large number of Police came on board. During the previous trip, the ship had lost a propellor blade, and the remaing stub, of manganese bronze, had been stored on the after deck. Unfortunately, this item was missing after the ‘coastal’ trip. Following a search, the remaining stub was never found! What they didn’t see before,was a length of black cotton, which led from the steering flat port hole into the dock! It appears that the other end had been attached to the stub, and it lay on the mud! It was retreived prior to the ‘coastal’, and no doubt disposed of on the continent, to someones advantage.

We left for the ‘long voyage’ about the middle of September 1954. We voyaged via Port Said, the Suez canal, Colombo, to Penang. We had to anchor in “the roads” at Penang, as there were no Port facilities. Whilst there, I went ashore, to view Penang station. This had a complete railway station, with all facilities such as platform, booking office newsagent etc, but no trains! One waited on the platform for the ferry, to take us across the water to B where we found the trains, locomotives, etc.

We were ordered to leave Penang Roads on Christmas afternoon. As I had a good idea of what might happen, I decided not to drink at all the day and night before On the 4-8 next day, I warmed the engines through, and generally got everything ready. Despite stremuous efforts by the Captain to change our Agent’s mind, we still raised the anchor, and departed at 15.00. As I had predicted, there was scacely a sober Engineer that day, which left me looking after everything else bar the main engines. We got away safely, and proceded down the Malayan Coast.

As it was Christmas, there was a certain “Ben boat” in transit along the coast,and she had a lit up Christmas tree attached to her foretruck. The challenge was to take the tree, with a bottle of whisky as the reward. However, what was not revealed was the high pressure hoses rigged on deck, used effectively on anyone game enough to attempt to retrieve it!

We travelled down to the Klang river, arriving at the mouth during the night. I was on the 4-8, I remember calling the Standby watch for 06.00. The two Second Engineers were on the controls, and when ‘slow ahead’ was rung on the Starboard engine, the starting air lever was operated, but nothing happend when the fuel lever was operated! This procedure was repeated three times, with the same effect. On the third start, I happened to be standing by the starboard engine fuel pump, and observed that it didn’t move. I informed the Second Engineer, Dick Purday, who then saw the same thing. By now, of course, we proceding upriver on the Port engine.

I was instructed to remove the large inspection door at the rear of the case which contained the chain drive to fuel pumps and both cam shafts. Sure enough, a trial start on air showed that the sprocket which drove the fuel pumps wasn’t turning! I then had to climb up inside the case, to ascertaing the problem. We couldn’t see anything from there, so proceded to Port Swettenham (as it was then) on one engine. Such was my introduction to the subject of your article! When tied up, we stripped the chain, etc, to ascertain that the six bolts holding the sprocket had all sheared off completely! When removed the decision was to get a spare flown out from the UK, whist temporary repairs were made by the local shipyard.

On reaching Singapore that New Years Eve night, we berthed “Port side to”, with a Dutch ship ahead of us, and the Christmas tree “Benboat” astern.

As it was New years Eve, a number of us went ashore, to visit the local Missions to Seamen, where a dance was being held. To my knowledge, it was the only Mission to serve alcohol. I did not drink much at that time, and unfortnately imbibed a litle too much “Tiger Balm” beer than I should have. I remember getting back to the ship before midnight, and passing out.

Around 2 am, I was violently aroused by the cabin lights being switched on, and a loud voice shouting “abandon ship”, and “man the lifeboat”. I was far too ill to move, let alone obey the call! Apparently, our Chief Engineer had taken two bottles of whisky to the Ben liner, to “entertain’ the engineers of that ship. Whilst he carried out that task, a number of our crew loaded a lifeboat with the long handled paint brushes used for painting ship, and a number of tins of boot topping paint. They rowed down to the Benboat, and when dawn broke, they had painted “HOME RULE FOR ENGLAND” across the bows, and “BALLS TO BEN LINE” across the stern. As some of your readers may know, the Ben line ships were painted a lovely grey, with white upper works, and varnished wheelhouse. This painting showed all over the waterfront on New Years Day. The two Captains thought it a good joke, ‘but they might have kept the party clean!”

I don’t know whether this is of any interest, but I was prompted by a comment about the ‘shennanigans” which went on. A lot more happened that trip, but is too long for this email. As for “small world’ stories. The Second Engineer I was on watch with , doing his ‘motor time’, was Ian Stewart, who I met years later on the Canberra, when we emigrated to Australia in 1965. He was then Chief Engineer of that ship.

From: Robin Spilling, by e-mail 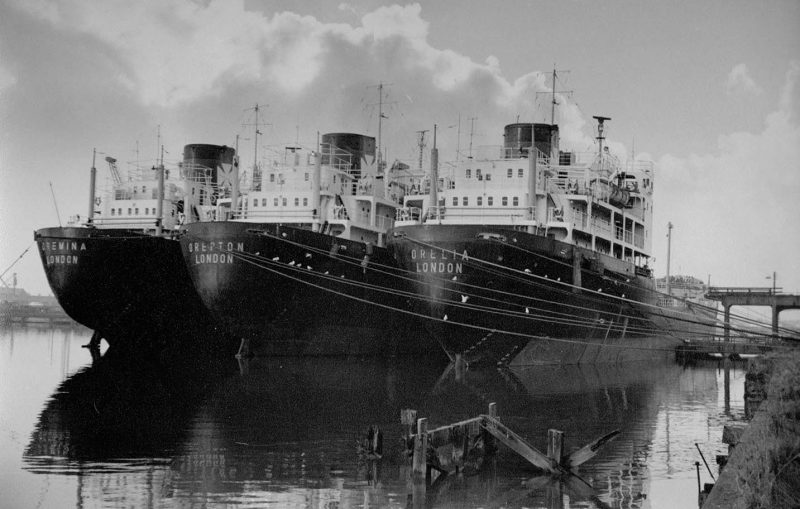 I think everybody can remember where they were when England won the World Cup. I was in the Royal Hotel, Port Talbot waiting to join the Orelia. I did three or four trips to Seven Islands and North Africa, then we dry docked in Port Talbot. I remember helping to finish changing the tailshaft on the last night in dry dock, then off to Seven Islands again.

On our return we were told we were going to be laid up for a while, the Orepton and Oremina were soon joining us. I knew the second engineer from the Oremina having sailed with him previously. The Chief engineers and seconds, reckoned the best thing to do was to run power from the Orelia to the other two. As I was doing the nights on the Orelia anyway, would I check on the other two, only the Orelia being live. This enabled people to go home.

Nobody knew then how long we were going to be there, just myself and an Australian second steward, Barry Pepper, living on Orelia.

Because of being in the dry dock we had befriended some of the locals. They made us welcome, and I remember going to Bridgend rugby club, and meeting the mayor at Porthcawl annual lifeboat dinner dance, a good time had by all. About this time the Oredian and Oreosa were moored in front of us, but they left after a week or so. The Oremina then went, and I transferred to the Orepton and sailed for Poti. The Orelia left soon after. The Orepton then went to Murmansk and Melilla in Morocco before I left.

I never did sail on another ore carrier, but went on the Oswestry Grange before leaving Houlder Bros. I have never been back to Port Talbot. Seeing Wales do well at football, and England celebrating the fiftieth anniversary of the world cup, brought the memories back to me.

Olsen and Ugelstad Of Oslo

A selection of this month's letters to the Editor