As always I enjoy the company-histories written by Norman Middlemiss. In the November issue of Shipping Today, he made a very interesting feature about Rex Line and Tor Line. However, what is not mentioned in the history of Tor Line is that in the first years this company was a Swedish/Dutch enterprise. In 1964 Rederi A/B Götha, Gothenburg and the Koninklijke Nederlandsche Stoomboot-Maatschappij (KNSM) of Amsterdam had the small RO/RO-vessel NERLANDIA built (on 50/50 basis) for the Gothenburg-Amsterdam service. KNSM herself ordered a second vessel, DANIA for her Copenhagen service. KNSM established a Swedish subsidiary company for her participation in NERLANDIA, being Rederi A/B Gotam.

After Rex and Transoil decided to create Tor Line for a Gothenburg-UK ferry service it was soon decided to include Amsterdam in the service as well. For that purpose KNSM (via Rederi A/B Gotha) and Bratt-Götha joined as shareholders, KNSM obtaining 25%. Consequently Tor Line had 4 equal shareholders when operations started. After the Rex Group (Rex, Transoil and meanwhile also Bratt-Götha) was taken over by Salen in November 1967, KNSM found herself as minority shareholder at the table with the powerful Salen Group. After a couple of years KNSM decided to sell her share to Salen.

I was reading the October edition of Shipping and left the magazine open at the pages concerning mv Wanganella to return to I later, but my Wife happened to see this and exclaimed I had my 6th Birthday on her! The family were emigrating to New Zealand after the war. This would have been 1947. We have talked often of the trips to and from New Zealand and the NZS ships sailed on but never had she mentioned the Wanganella. We thought it an amazing coincidence and it brought her some happy memories!

She now is looking to find if there is any way of seeing the Passenger Lists from that period but I feel they may have been destroyed?

I enjoy the magazine keep up the interesting work.

I am looking for information on this Liverpool shipowner who in the 1890s had a fleet of steel, four-masted square riggers on the UK – West Coast South America run importing bulk cargoes, mainly nitrates. The ship names were prefixed “Drum.” The offices began in Mersey Chambers, moving to Tower Buildings, Water Street via Rumford Place. The partnership was dissolved in the early 1900s and the company became Joseph Chadwick & Son (Astral Shipping) when Robert Burton Chadwick joined his father’s business. Robert Burton Chadwick was subsequently knighted and later created First Baronet Chadwick in the County of Chester. The company opened a business in London trading as Chadwick, Weir & Co., with interests in Argentina and Uruguay. Sir Robert was the founder of the Honourable Company of Master Mariners, incorporated in 1926.

Please reply to the editor at editor@shippingtandy.com who will forward any e-mails to Glyn

In his letter about Heavy Lift Ships in the Nov edition Mr. Frost states that British shipping companies did not use the heavy lift Stulcken derrick. This is not correct as a number of British companies did in fact use the Stulcken. The first of these was T. & J. Harrison of Liverpool with the introduction of the M.V. Adventurer in 1960 which had a 180 ton lift Stulcken fitted and was at the time the biggest lift Stulcken in the world. This ship was followed by the Custodian and Tactician in 1961 each with an 110 ton lift Stulcken. These two were followed in 1964 by the M.V. Inventor with a 150 ton lift Stulcken. Then in 1966 by two Swedish built ships the M.V. Trader and Linguist which were both fitted with smaller 70 ton lift Stulckens. Then in 1968 two more 150 ton lift ships were built the M.V Magician and the M.V. Historian and finally in 1972 the M.V. Craftsman with two 250 ton lift Stulckens which could lift 500 tons working in tandem which was again the biggest lift in the world at that time. All these ships were built at the Pallion yard of William Doxford with the exception of the two smaller ships Trader and Linguist which were built at the Lindholmens yard at Gothenburg, Sweden and engined with two Vee 8 Pielstick engines. The Adventurer, Custodian, and Tactician all had Doxford opposed piston engines. While all the others were powered by Swiss built Sulzer engines. I actually sailed as 2nd Engineer on the Trader, Historian, and the Craftsman which were all fine ships, even if the Trader could roll on damp grass! Later on other British companies also started using the Stulcken. These included Blue Funnel on the Priam class ships and Glen Line on their equivalent class to the Priams, and some of the later P&O Strath cargo liners were also fitted with Stulcken derricks. I hope that this is of some interest. 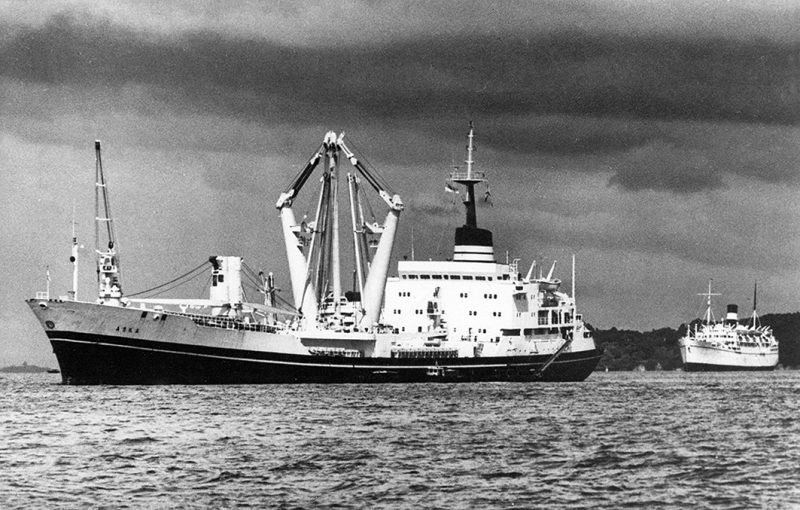 With respect to Mr. A.D. Frost`s letter in the November 2017 issue 333, I attach a picture of B.I`s heavy lift ship Aska which together with the Amra were fitted with 300 ton Stulken derricks.These handsome ships were built by Swan Hunter and Tyne Shipbuilders in 1969/70. The ship in the background is the Rajula.

I have just been reading the interesting article on The Bristol Steam Navigation by Norman Middlemiss in the November issue of the magazine.

Just a quick point though, the Dido of 1963 was built by Charles Hill at Bristol not at Waterhuizen as mentioned on two separate occasions in the text. I was lucky to be invited to the launch of the ‘Hero earlier in 1963 and well remember her partially built sister sitting nearby awaiting her own launch in June.