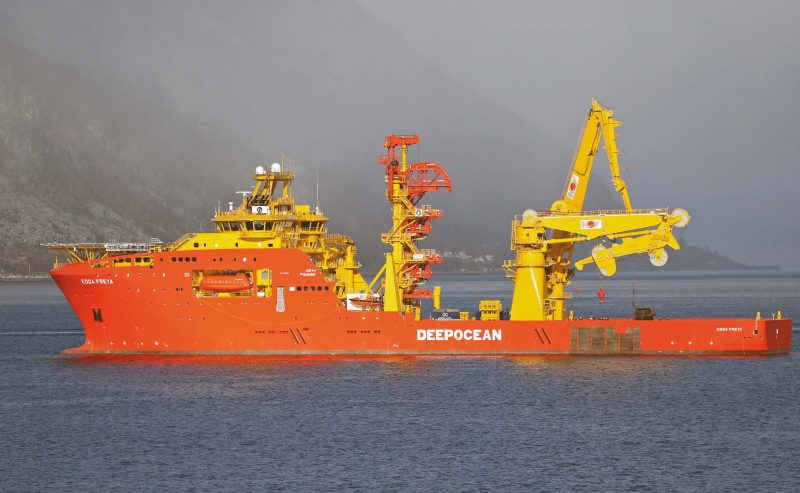 The Offshore Industry is going through the doldrums at present, largely driven by a fall in oil prices after a period of considerable growth in that marine sector. Whilst large segments of company fleets are being laid up and some companies are ceasing their offshore work altogether, state of the art newbuilds continue to come on stream. One such new vessel was the 17.078gt Multipurpose Offshore Construction Vessel (OCV) Edda Freya. Østensjø Rederi ordered the 149.80m long ship from Kleven Werft A/S on 18th October 2013 for delivery in the spring of 2016.

Based in Haugesund, Norway, Østensjø Rederi has been providing maritime services worldwide since 1974 in the areas of Accommodation, Offshore and Towage. The company currently operates a fleet of 9 offshore ships, 1 accommodation ship and 19 tugs (which includes the Solent Towage fleet). Company owner, Johannes Østensjø established Østensjø Rederi and maintains a passion for innovation and vessel design, along with the dedication to progress. In 1973 the contract was signed for the first of four supply vessels with a ship yard in South Africa. In 1975 Østensjø Rederi was the first operator in the world to introduce high sides on platform supply vessels (PSV) to ensure deck workers’ safety. This is an industry standard today. The first major platform supply deal was signed in 1976 with British Petroleum (BP) at the Forties field near Dundee. In 1982 the Edda Fjord became the first PSV to use dynamic positioning (DP), another industry standard of today. In 1999 Østensjø Rederi and Solstad Offshore teamed up to create the subsea contractor DeepOcean. In 2007 the PSV Edda Fram was delivered as the first offshore vessel with Voith Schneider propulsion with the first ever Voith Schneider propelled subsea, and accommodation vessels following. This time was also a booming period for vessel commissioning, with 11 ships under construction, whilst in 2008 DeepOcean was sold. During 2011 the monohull accommodation vessel Edda Fides came into service, becoming the first vessel of her type in the world. In 2013 the PSV Edda Ferd was delivered, becoming one of the first Diesel Electric Hybrid vessels in the market and thus achieving both substantial fuel and emission reductions. Three years later the company became the first shipping operator in the world to get 9001:2015 accreditation from DNV. The advanced OSV Edda Freya is the latest milestone for Østensjø Rederi, being the largest investment in the history of the company. The keel of build No. 373 was laid at Kleven Verft A/S in Ulsteinvik, Norway, on 5th November 2014.

The Ravano family of Genoa

Our newbuild feature this month is a Multipurpose Offshore Construction Vessel