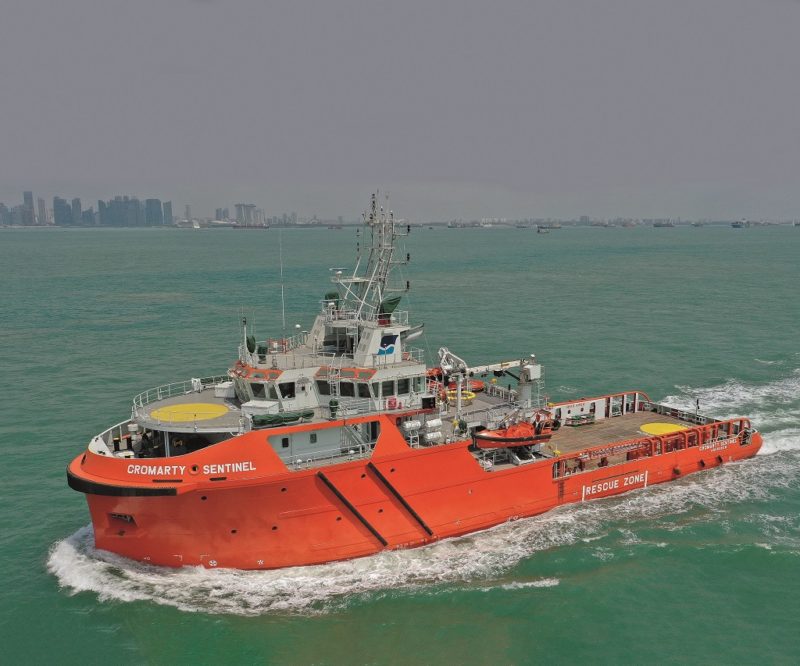 On 4th January 2022, Sentinel Marine took delivery of the company’s 10th newbuild Emergency Response & Rescue Vessel (ERRV) over a period of 7 years in the form of the 2,030gt and 60m long Cromarty Sentinel. Sentinel Marine arrived on the Offshore Shipping scene in 2011 when an office was established in Singapore and Marine Architect Khiam Chuan Marine designed 59.25m long/62t bollard pull Anchor Handling Tug Supply vessels (AHTS) were speculatively ordered on 25th July 2011 from Nam Cheong, and built at the Fujian South East Shipyard, with the aim of building up and operating a fleet in Asia. Whilst in build, these ships were subsequently sold to a company with an urgent need for such tonnage. Their names were to have been Able Sentinel, Daring Sentinel and Epic Sentinel. The company steadily developed and, in late 2012, the decision was taken to enter the North Sea market with a new Aberdeen office being established, and registered from 10th April 2013.

Just prior to this, the company’s first PSV, Hull 487E, was launched on 28th March 2013. The Aberdeen base primarily looks after the ERRV business in the North Sea whilst the Singapore office is responsible for all new builds (ordering the vessels, supervision during construction and sale and purchase of vessels as and when required). Ultimately the company can trace its roots back to Nomis Shipping, founded by Sentinel Marine Group’s CEO Rory Deans and his father, Frank, in 1989. When the Aberdeen base was set up, the market in the North Sea was buoyant and in particular the Emergency Recovery & Rescue Vessel (ERRV) fleet at that time consisted of a significantly high proportion of older vessels. It was decided to expand the UK operation by way of an order for 8 ERRVs to provide a suitably backed-up service to clients. A charter fleet of ERRVs (known previously as standby vessels) needs a relief vessel in order to provide a year-round service to customers. This permits each ship to be relieved, allowing them to return to port to change crews and replenish on-board supplies in rotation. The basic requirements for an ERRV in the North Sea are quite high. The UKCS has the highest requirements and standards of all the North Sea sectors. A standard vessel must be able to rescue and accommodate up to 300 people. The new fleet members were also designed to perform emergency towing and are equipped with dynamic positioning systems. In partnership with Maas Capital Investments, an investment fund of ABN AMRO Group with a focus on the offshore oil and gas industry, the first four ERRVs were ordered on 18th May 2013 with an option for a further four as part of what would become a 3-phase project costing around £186 million. The steel cutting for the first 61m ERRV (Hull SK85) took place at the Fujian Southeast Shipyard in China on 17th July 2013 and the 1,944gt Cygnus Sentinel (originally intended to be Cromarty Sentinel) was born with her keel laying following on 6th May 2014. Launch day was on 23rd August 2014 and the keel laying for Hull SK87 (Lundy Sentinel) followed four days later. The Fastnet Sentinel (Hull SK86) was launched on 29th September 2014 at the same yard followed by the Lundy Sentinel (Hull SK87) on 22nd December 2014. Interestingly, it was Hull SK87 that was delivered first on 13th January 2015, the Fastnet Sentinel, and deployed to the Falkland Islands. The rest as they say, is history with the Cygnus Sentinel (Hull SK85) and Lundy Sentinel (Hull SK87) being the second and third deliveries. The other member of the initial order was the Forties Sentinel. When the fleet of 8 ERRVs was ordered for the Aberdeen base there were around 125 ERRVs already at work in the North Sea with 60% of these being in excess of 40 years old or more. Most operators already had age stipulations with regard to the AHTS and PSV vessels being chartered and this routine was extended to ERRVs. Fuel consumption and emissions were lower and reliability was higher on Sentinel’s new offering of ERRVs, which placed the company at an advantage over competitors. Reliability is of huge importance because, if an ERRV suffers a failure, its associated oil or gas platform may have to cease production until the issue is resolved. Such a halt in output could cost in excess of $500,000 per day. ERRVs tend to be unique to the North Sea and on 28th January 2014 came the news that Sentinel Marine Ltd. had ordered the optional quartet of ERRVs, but to a revised 62m long Focal 531 Multi-Role design. The keel was laid for Hull SK96 Portland Sentinel, the first 62m ERRV, on 28th February 2015 at the Cosco Shipyard in Guangdong, China. She was launched 5th October 2015 and delivered 15th July 2016. Hull SK97, the Biscay Sentinel, was launched on the 12th April 2016 at the Cosco Dalian Yard. The keel of Hull SK98/N534 (Bailey Sentinel) was laid on 28th October with hull no. SK99/N535 Malin Sentinel launched 6th July 2017. The Biscay and Bailey were delivered in 2018 but the 8th sistership, the 2,173gt Malin Sentinel, lagged behind her sisters and joined the fleet on 23rd June 2020. The delayed completion of the second series was in part due to the addition of a 65m Tanker Assist ERRV variant, the 2,667gt Mariner Sentinel, constructed after the Portland Sentinel to meet a specific charter requirement and delivered on 2nd May 2017. The latter vessel brought the newbuild tally to nine.

Cromarty Sentinel is a featured newbuild this month.