The island of Reunion was claimed by France in 1638 and settled in 1665 under the name of Bourbon Island, gaining the name of Reunion in 1793, and it has remained as French territory until the present day except for a short period during the Napoleonic Wars. The island lies 500 miles east of Madagascar and is 969 square miles in area with one active volcano and nine dormant volcanoes. There are coastal plains suitable for growing sugar cane, vanilla, tea, maize, potatoes, tapioca and aromatic spices and herbs. The vast majority of the land (over 70%) is devoted to sugar cane, and the distillation of sugar residues or molasses into rum, with rice as the main import to the port of Pointe des Galets on the north west corner of the island and ten miles from the capital of St. Denis. The capital has the very French architecture of the Old Town Hall, large Creole mansions and villas formerly owned by sugar barons, and a theatre. The island has had the status of a French Overseas Department within the Indian Ocean since 1974. There is little support among the population for independence, despite the OAU (Organisation of African Unity) ruling that condemned the island under ‘colonial occupation’. The port of Pointe des Galets has been steadily expanded since 1986 with a new port to the east of the old port handling six million tonnes of exports and 3.5 million tonnes of imports annually.

The much larger island of Madagascar (222,658 square miles) became a French protectorate in 1885, and today has eighteen ports, the largest being Tamatave, Toamasina and Mahajanga, which handle over 70% of the export trade of sugar, rice, coffee, logs and sawn timber. Madagascar is often referred to as the Great Red Island because of its red clay soils, and it became independent as the Malagasy Republic in 1960 and its capital of Tananarive, with the former French naval base at Diego Suarez evacuated to become a trading port. The island is the fourth largest island in the world after Greenland, New Guinea and Borneo, with a very difficult terrain and volcanoes rising to 9,436 feet in height. This is the main reason for a buoyant coastal trade and the use of airlines by some of the population to move around. A new deep water port at Ehoala near Fort Dauphin has been constructed to ship ilmenite from the nearby mines. 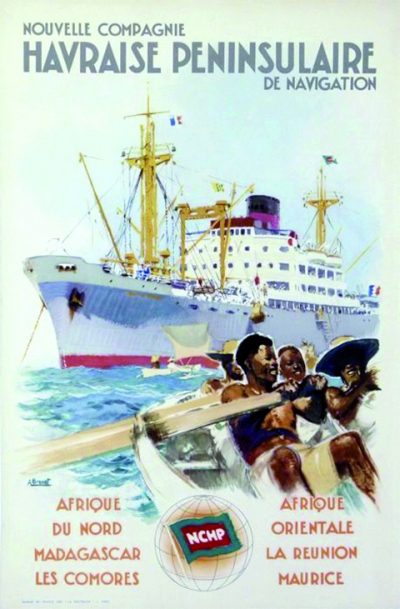 The Seychelles became a French colony in 1770 and take their name from the Vicomte Moreau de Sechelles, who was controller general of finance under Louis XV. The islands were ceded to Britain in 1814 and administered as part of Mauritius until 1903 when they became a Crown Colony. The island of Mahe is named after a French nobleman, and today there are ferry and freight services from its capital of Victoria to the islands of Praslin and La Digue, as well as to Durban by several shipping companies such as the Seychelles Shipping Line. The Comoros Archipelago lies between Madagascar and the east coast of Africa, with the island of Mayotte today administered separately by France from the other islands. The official language is French, and the Comoros achieved unilateral independence in July 1975. Mayotte rejected the new Government of the Comoros proposal that it should join under a federal system, and there is little support from the local population for that today.

Mauritius (790 square miles) first received French settlers in 1715 and they named the island Ile de France, however the British captured the island in 1810 and restored its original name of Ile de Maurice or Mauritius. The official languages today are French and English, with the population mostly now of Indian and African origin, with the island having a very Indian and French flavour. The capital and port of Port Louis exports large amounts of sugar and its by-products, tea, tobacco, aloe fibre and local agricultural products, with rice as the main import.

Rodrigues Island lies 560 kilometres north east of Mauritius, named after its discoverer Diego Rodrigues of Portugal in 1528. France colonised the island in the name of Louis XV and sent 36 settlers in 1725. British rule was confirmed in May 1814 by the Treaty of Paris, and it was administered as a British dependency of Mauritius until 1972 when Mauritius became independent of Britain. The Chagos Archipelago to the north originally had French settlers and then came under the jurisdiction of Mauritius under the British. The Chagossian population were evicted by the British when they signed away the island in December 1966 on a fifty year lease to the U.S.A. as a military base. The local population were exiled to Mauritius, the Seychelles and Britain, and their fight to return to their own island in 2016 when the lease expires is ongoing. The coral atoll harbour of Diego Garcia was much used by the Allies as a naval and flying boat base during World War II for Sunderland and Catalina flying boats hunting Japanese submarines.

A history of this French Indian Ocean Service