There is a romantic sound about the name Robin Hood’s Bay and having arrived there by that long steep road which runs sharply down to the sea from the Yorkshire moors, one’s preconceived ideas of the place are not disappointed, for there is a genuine air of antiquity and simplicity about it, with none of the “Ye Olde” touch which so often spoils places striving to attract visitors. Robin Hood’s Bay is old enough not to bother about such gimmicks.

A steep little road,with a gradient of something like one in four winds down to the sea from the car park at the cliff top, with attractive little alleys branching off it. There is hardly a house in those alleys that is not several hundred years old, and their age seems to sit on them lightly. There is nothing uniform about “the Bay” for every inch of space has been utilised and everyone seems to have squeezed as much ashe could into his little bit of ground.

In the old days when Britain’s coasting trade was carried mostly in sailing vessels, Robin Hood’s Bay was more important than it is today for, although ships did not actually go there (there is no possibility of a harbour), very many were owned there and seamen from there manned them. Those days are gone long since and of all the men who knew them there are only a few still left living in “the Bay”. One of them is

Captain Thomas Jackson, born there in 1877, who is one of the few men still with us who sailed in one of the old Collier Brigs.

Captain Jackson lives in “TheBolts”, one of those attractive alleyways running off the steep little hill which ends at the waters edge. The house opposite his has the date 1709 on it. His house is a little more modern, 1729, and looking at the stonework of those houses, now over 250 years old, one is amazed at the freshness of it. Time and the winters of more than two centuries seem to have left them untouched.

Captain Jackson’s father was a farmer and the family have lived in the area for many years. There was no particular seafaring tradition in it, but it is certain that living in Robin Hood’s Bay for so long many Jacksons must have been seamen. When young Thomas expressed a desire to go to sea, two uncles connected with the fishing industry wanted him to go to Grimsby and become a fisherman. But his father decreed otherwise. “No” he said. If you want to be a sailor you’d better do it properly”. So in 1892 young Jackson was apprenticed to Captain George Milburn for five years in the Brig Danube.

Captain Milburn, who had been at sea himself, owned at this time the Danube and another brig the Sir Henry Havelock. Earlier,in the seventies, he had owned a larger vessel, the barque Warspite, built at Whitby in 1854.

The Danube and the Havelock were practically sister ships, just over 200 tons gross with dimensions 92x24x14, which gave them about 3.8 beams to length, tubby little craft. The Danube, oak built and copper fastened was built at Whitby in 1855.

Captain Jackson joined the Danube at West Hartlepool where she was loading for Rochester.

A fine picture of the Danube, painted in 1896 by an artist called S. Middleton, and now hanging in Captain Jackson’s sitting room, shows her to be almost straight stemmed, with double topsails, single topgallants, and royals. There is a little artists licence here, for actually the brig, like most of her type, had no fore royal, only a main royal. She is shown with reef points on her upper topsails and these were sometimes used, but the courses were never reefed. In the painting the bentnick boom she had on her foresail is clearly shown. The bentnick boom was a spar fitted to the foot of the foresail for ease in going about in narrow waters,and was standard equipment in collier brigs. It made for handiness in working in narrow waters as there were no tacks or sheets to attend to,and also saved a man. It was a common place fitting in the whalers, for working in ice. 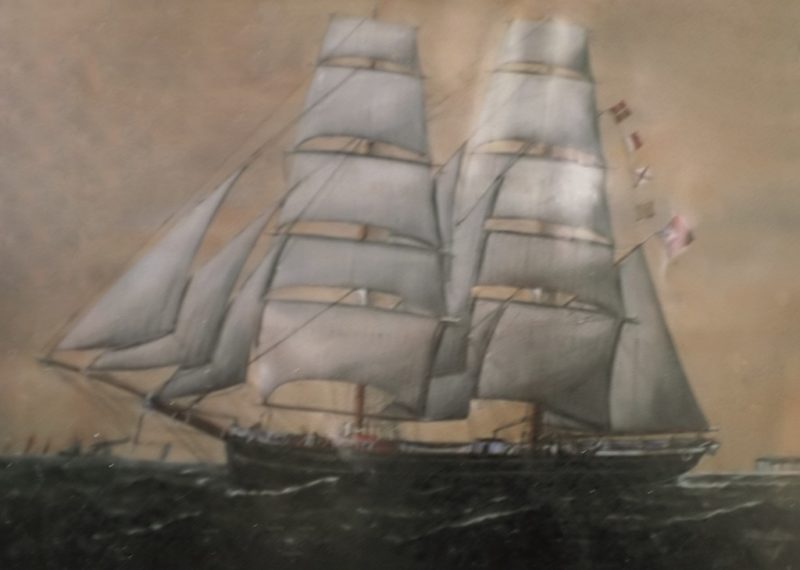 The painting (above) also shows the Danube with a small boat hanging over the stern and another on the main hatch.

The master of the Danube was Capt. William Harrison, who had a share in the vessel. He was a Robin Hood’s Bay man whose family, like the Jacksons,had lived in the district for many generations. In winter Capt. Harrison stayed at home and let his mate, by the name of Reekie, have the ship, a very convenient arrangement! It may be said that neither Capt. Harrison nor his mate had a certificate. A few years before this there were two Harrisons in Robin Hood’s Bay who were ship owners, John who owned the snow Vivid and M.Harrison who had the brigs Arica and Lucy.