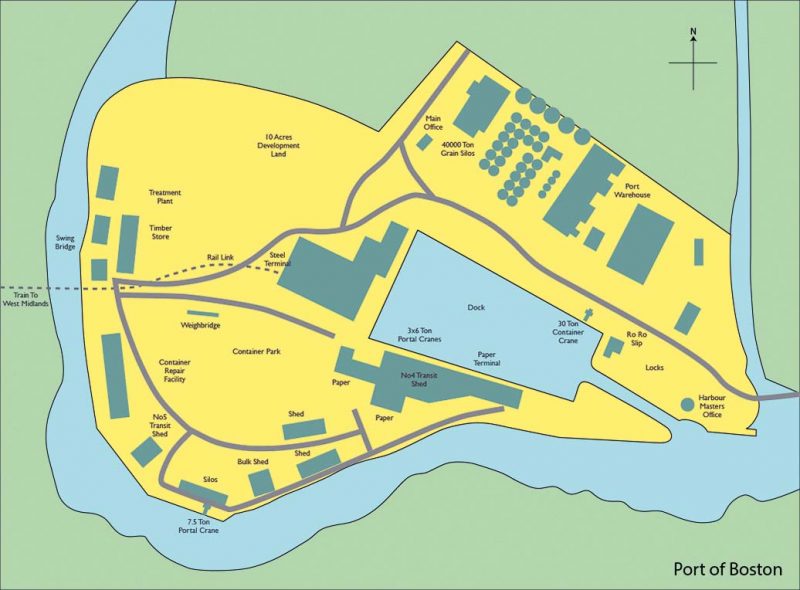 It was a chance natural occurrence which allowed a small settlement called Boston near the bottom left-hand corner of the square-sided estuary known as The Wash (sandwiched between the counties of Norfolk and Lincolnshire) to grow into a bustling port.

In the early Middle Ages, Boston (no more than a quarter of the nearby settlement of Skirbeck), had developed at the head of the Haven, a tidal inlet of the Wash into which flowed a stream carrying water from the vast tracts of virtually untamed fenland to the east and west. The reason for this situation appears to be that the site was where the navigable tidal waters lay alongside the land route using a terminal moraine ridge.

The River Witham, however, (on which the town is now built) followed quite a different course, flowing into the Wash further south than it is today, near the Welland Estuary at a place known as Bicker Haven. At this point, the predecessor to Boston, a port called Drayton had established where the Witham emerged, taking advantage of the valuable trade route following the river as far as the city of Lincoln 35 miles north west, where it joined a cut constructed by the Romans know as the Fossdyke, linking Lincoln to the River Trent at Torksey and giving access to the Humber.

However it was a dramatic flood in the September of 1014 which permanently altered the geography of the area, diverting the river Witham so that it now linked up with the Haven.

Business was soon moved from the now abandoned town of Drayton and Boston became established as a port in its own right.

This month's port of call features the port of Boston, Lincolnshire.