Bergen is known as the ‘Gateway to the Fjords’ and is reached by a beautiful sea passage through channels between many islands to the west of the city and port. The sea passage includes passing beneath two bridges, one to Askoy island and the other to Litlesotra. The city and port lies on the peninsula of Bergenshalvoyen at the head of Byfjorden fjord, with the city having a population of 279,000 and the metropolitan area of Bergen having a population of 425,000. Bergen is the busiest port in Norway with 314 cruise ships calling between April 2017 and April 2018, this number having doubled in the last ten years. Bergen is also a very important centre for the offshore oil industry and subsea technology. The best way to see the port is from the top of Mount Floyen, reached by a quaint funicular railway to give panoramic views of the port and surrounding area. Bergen is very proud of its Bryggen World Heritage Site on the main Vagen harbour, and of its long history of seafaring, with the Bergen International Seafarer Centre opened on 24th May 2016 as the only one of its kind in all of Norway. 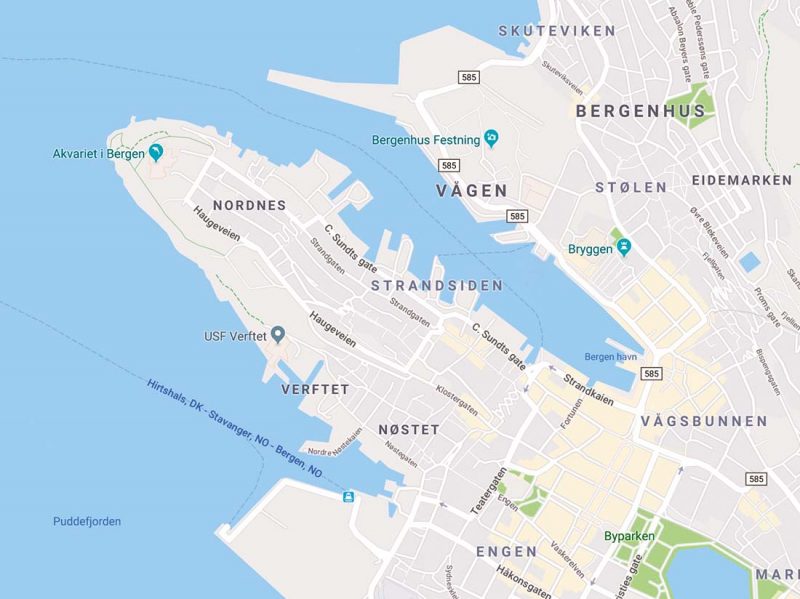 King Olav Kyrre granted town status to Bergen in 1070 as it was the largest town in Norway and capital of Norgesveldet, a region that included Iceland, Greenland and parts of Scotland. Bergen replaced Trondheim as the capital of Norway in 1217, and later Christiania, renamed Oslo in 1912, became the capital of Norway in 1299, but Bergen continued to grow in leaps and bounds as a trading centre. Bergen has always been and remained thus for centuries as the King’s town with his personal bodyguard and followers ensconced in the heavily fortified Bergenhus (Bergen Castle).

Tyskebryggen (The German Quay), now called the Bryggen row of two storey timber gabled houses, with formerly sleeping quarters above businesses on the north side of the main Vagen harbour is a current reminder of the almost total influence that German trade had over Bergen between the end of the 13th century until 1754. The Hanseatic League was in control of the Baltic trade and its ports, which explains why Bergen exports of salted codfish and furs in return for foodstuffs not available in Bergen were under the control of the Hanseatic ports of Lubeck, Bremen and Rostock. The Bryggen housed powerful German merchants in a defensible area of double rows of long wooden sheds, with warehouses and business premises on the narrow ground floor and living quarters above. As in other ports controlled by the Hanseatic League, this area was known as a Kontor, which in fact was walled off for the decade of 1520s before the town insisted that the wall was pulled down. The total trading influence of German merchants was only broken after the trade monopoly of Bergen with Northern Norway and with Sweden gained strength in the early 18th century and most of the German merchants returned home in 1754. An ultimatum from the King of Norway finally managed to make the German Kontor merchants either go home in 1754 or become citizens of Norway.

The Hanseatic League influence, however, remained strong for some time afterwards as some German merchants and craftsmen settled in the town to keep their strong mercantile and cultural influence alive. Their medieval timber gabled houses were often burned down by fires and rebuilt, but the last fire in 1955 left only ten gables standing. Excavations after this 1955 fire revealed archaeological treasures of the medieval era and led to the establishment of the Bryggen Museum. The green spaces of the Bergenhus Festning, between the Skolten North, Skolten South and Bontelabo ferry and cruise terminals and the Bryggen, contain a Gothic ceremonial hall built for King Haakon Haakonson for the coronation and wedding in 1261 of his son Magnus Lagaboter. Rosenkrantz Tower is adjacent to the ceremonial hall and is part of the old fortifications of the Bergenhus built in 1260 and modified exactly three centuries later.

A full scale naval battle took place in the main Vagen harbour in 1655 between the British and Dutch navies for control of the exclusive rights to trade between Central and Northern Norway and the North Sea and Baltic Sea areas. The garrison at Bergen supported the Dutch, and Bergen continued to look towards mainland Europe instead of Britain for trade, becoming the biggest city in Norway until Christiania outgrew it in the 1830s.

Our port of call featured this month is from Norway