First of a Series of 20 Knot Ben Line Cargo-Liners

A Ben Line cargo-liner sailed every few days in the 1950s from the Royal Docks on the Thames or East Coast ports in a continuous procession to the Far East laden with British manufactured goods. The Scotstoun yard of Charles Connell & Co. Ltd. on the Clyde launched Benloyal on 3rd October 1958 and completed her as a fast cargo-liner of 11,493 grt and 11,250 dwt in January 1959 and the first Ben Line cargo-liner able to reach Singapore in under 20 days. The fast service was extended to Hong Kong, and the passage time became 19 days to Singapore and 27 days to Hong Kong, with further extension to Japanese ports. Benloyal was powered by twin Pametrada steam turbines double reduction geared to a single shaft and manufactured by David Rowan & Co. Ltd. of Glasgow with a normal output of 14,000 shaft horse power at 105 rpm at the propeller, but a maximum of 15,500 shaft horse power to give a speed in excess of twenty knots. Ben Line had a big fleet of 22 cargo-liners of 247,936 dwt at this time, with Benloyal as the twelfth new vessel completed for Ben Line Steamers Ltd., managed by William Thomson and Co. Ltd. of Leith, since the war. 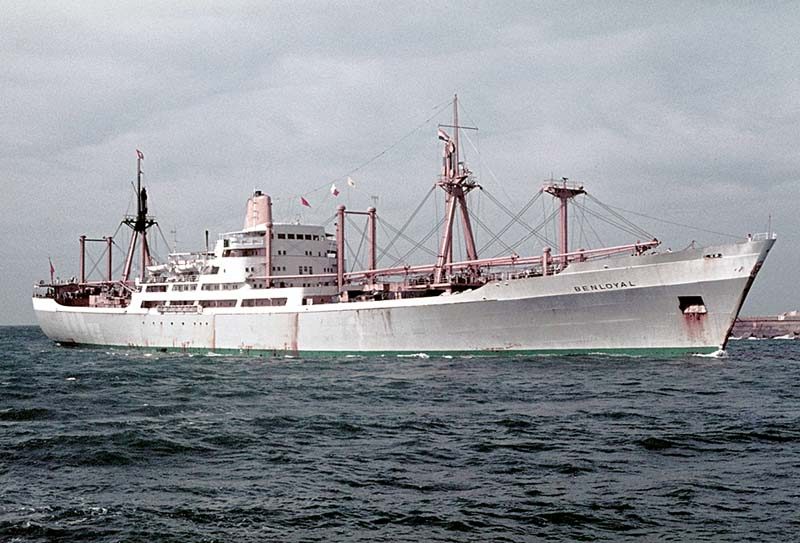 The design of Benloyal included six large holds and seven hatches, the seventh being on the poop deck, and spacious ‘tween decks for the carriage of general cargo. There were upper and lower ‘tween decks in the four forward holds but only upper ‘tween decks in the two aft holds. Four compartments of 14,800 cubic feet in number four lower ‘tween deck were fitted for the carriage of refrigerated cargo, with good insulation maintaining a temperature of zero degrees under tropical conditions. Three tanks for the alternative carriage of latex or general cargo were fitted in number one hold and aft of number six ‘tween deck (port and starboard), and four tanks for the carriage of edible oil were fitted at the tunnel sides of number five hold. An unusual and important cargo carried by Ben Line was condensed milk, with certain compartments reserved for its carriage at an ideal temperature. The four refrigerated cargo spaces as well as the four edible oil tanks in number five hold were all fitted with a separate air heating and circulating system. An extraction fan withdrew air from the spaces and passed it over a heater before returning it to the tank or compartment. Thus, the temperature could be gradually raised during the voyage to suit conditions at the port of discharge.

Six special mechanical ventilating units were coupled to a central air drying installation to ventilate the holds, special cargo spaces, and the latex and edible oil tanks. These were capable of changing the air at 38,000 cubic feet per minute, and were arranged to supply, recirculate or exhaust the spaces as required. The operations of the ventilating units were shown on a central recorder, which showed the dewpoints of the air in the holds and the outside air temperature. The galley, laundry, drying room and storage rooms were served by centrifugal fans in order to minimise excess heat in tropical conditions. Sewage disposable was via two vertical pumps with automatic starting apparatus.

The weather deck hatchways were closed by means of MacGregor watertight steel covers of the single pull type. The long fo’c’stle of length 71 feet covered number one hold, the upper deck covered number four hold and the machinery spaces, and there was a short poop of length 41 feet. Among the striking features of Benloyal were her streamlined superstructure and unusual aerofoil section funnel, the latter designed by wind tunnel tests by the National Physical Laboratory in order to minimise soot falling on the aft decks.

Single berth cabins were provided for each crew member of the deck, engineering and catering departments in the long bridge deckhouse on the Upper Deck. Forward of number four trunked hatchway there was a large crew recreation room for the sixty crew members, with toilets provided on the centreline between the engine and boiler exhaust casings. The Navigating and Engineering Officers were accommodated in the deckhouse on the Bridge Deck, the Chief Engineer having a three room suite. At the aft end of Bridge Deck was the air conditioned Dining Room with seating capacity for 33 persons, with a new lighting system that diffused the illumination from fluorescent tubes by means of square acrylic plastic panels. The passenger accommodation for ten passengers was arranged in an unusually shaped deckhouse at the forward end of Boat Deck in four two-berth and two single-berth cabins. The air conditioned Passenger Lounge was arranged centrally between their cabins, and at the aft end of the deck was a spacious air conditioned Smoking Room entered either from the outside deck or from an internal stairway from the Dining Room entrance hall.

The beautiful furnishings of the passenger public rooms and cabins were chosen by Lady Thomson, wife of Sir Douglas Thomson (Bart), who along with Edward Gordon Thomson, were two of the partners of William Thomson and Co. Ltd. The Dining Room was panelled in dark wood with curtains on either side of the windows, and a portrait of H. M. The Queen above the main table seating nine, with the other diners seated at tables for six, four and two. The Smoking Room was beautifully furnished with dark carpets and light coloured fabric easy chairs surrounding elegant and slim tables to give a room for relaxation. The four two berth passenger cabins had one side elegantly curved and fitted with a wide window as well as a large dressing table with mirror above, comfortable sofa and easy chairs, and raised beds. The Passenger Lounge was furnished with dark carpets, light coloured fabric easy chairs and comfortable sofas, and elegant occasional tables usually decorated with flowers in tall glass vases. Ventilation and heating to the passenger public rooms and cabins was provided by two units capable of maintaining an even indoor temperature of seventy degrees Fahrenheit via standard punkah louvres.

The Master’s House was elliptical in shape above the Boat Deck and contained a suite of three rooms for his use in his dayroom, bedroom and office, and nearby were the cabins with en-suite facilities for the Chief Officer and Pilot. The Radio Officer was accommodated on the Navigating Bridge, where he could be in close proximity to the radio room. The steering console position, Marconi Radiolocator radar, long range direction finder, echometer and bearing indicator were situated at the rear of the wheelhouse, with the port and starboard engine telegraphs situated close to the sliding doors giving quick access to the bridge wings. The wheelhouse floor was wooden and the wheelhouse front was fitted with three Beclawat wide vision windows of dimensions four feet wide by 2.5 feet high and were of the watertight vertically sliding design, and were flanked on either side by a fixed window of similar size and fitted with the important and vital Kent circular clear view screen.

First of a Series of 20 Knot Ben Line Cargo-Liners