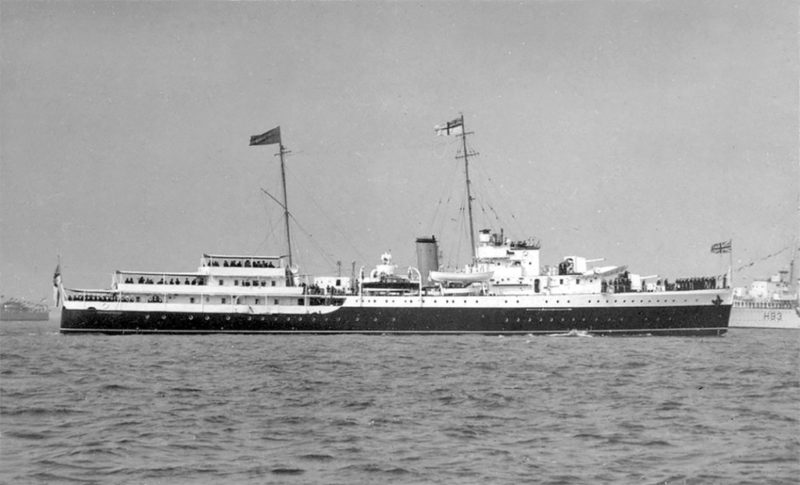 HMS Enchantress was laid down in 1934 as HMS Bittern, the prototype for a new class of sloop, the Bittern Class. However she was renamed prior to launch and completed to serve as an Admiralty Yacht for the use of the Board of Admiralty, when the Royal Navy could afford such a luxury. Although retaining her original armament of two single 4.7 inch guns forward and one amidships the after part was fitted with accommodation and offices to enable her to carry out her new role.

Enchantress (above) was painted with a black hull, green boot topping, white superstructure and buff coloured funnel. She was used extensively by Admirals normally based ashore, the Board of the Admiralty and to supplement the Royal Yacht. She was present at the 1935 Silver Jubilee Fleet Review and the 1937 Coronation Review. 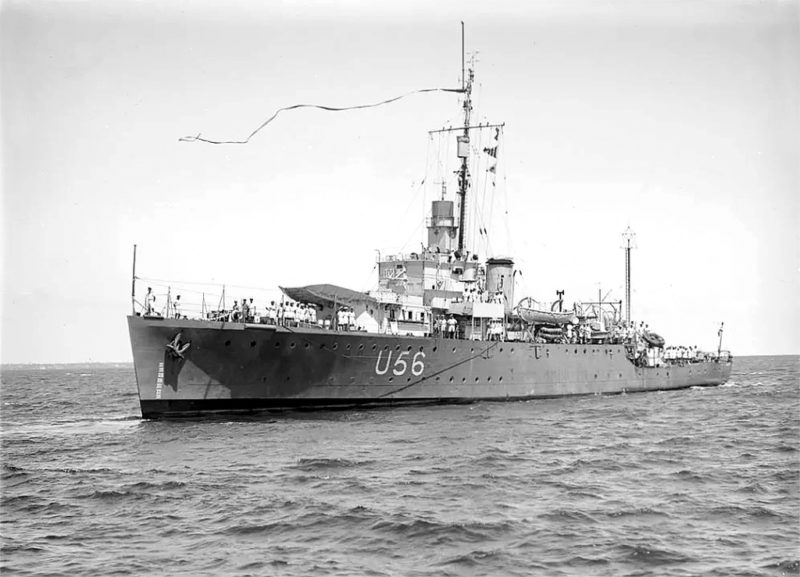 The vessel reverted to her role as a sloop upon the outbreak of war in 1939 and her opulent fittings and some accommodation was gradually removed as the conflict progressed (above).

Whilst based at Gibraltar in 1942 she took part in the sinking of the Italian submarine Corallo in December of that year. Enchantress eventually rammed and sank the boat when it was blown to the surface. The damage sustained necessitated temporary repairs at Oran before more permanent repairs at Grimsby. She did not return to service until June 1943.

In 1945 she was allocated to the Eastern Fleet, but had only reached Colombo by the time the Japanese had surrendered. She left Sydney, New South Wales for the UK on the 27th December 1945 arriving at Portsmouth in March 1946 and was destored and laid up pending disposal.

On the 22nd October 1946, Enchantress was sold to the Three Star Shipping Co. Ltd. for £22,500 and taken to the yard of J.I. Thornycroft at Southampton for rebuilding as an excursion vessel.

Renamed Lady Enchantress she was fitted with a larger funnel, the bridge and shelter decks were extended aft and she was fitted with six (three either side) large lifeboats, which dominated the profile of the ship. However the cost of the conversion escalated with a subsequent delay in entering service.

Her initial sailing did not take place until 4th August 1947. The schedule for the ship was to sail from Gravesend to Margate followed by a cross channel cruise off the Dunkirk beaches on Tuesday, Thursday, Saturday and Sundays. On Monday and Wednesday the vessel carried out a cruise around the Goodwin Lightship. She remained in port on Friday for maintenance and to rest the crew.

At the end of the 1947 season she was laid up on the Thames after being found to be uneconomical to operate. It was not until the 27th July 1949 that she was towed to Dartmouth for charter, which did not materialise, and the vessel was laid up there until early 1950.

Following a short refit at White’s yard at Southampton she commenced a service on the 2nd July 1950 to the Channel Islands.

Lady Enchantress sailed from Torquay to Guernsey on Monday and Friday, to Falmouth on Tuesday, to Guernsey via Plymouth on Wednesday and to Weymouth and Bournemouth on Thursday. On a Sunday she cruised off the Normandy Invasion Beaches.

Mechanical problems were a constant cause for concern, and her sailings often suffered from delays and cancellation. However the vessel was well patronised and often carried 400-500 passengers on each excursion.

On Wednesday 30th August 1950 Lady Enchantress sailed from Guernsey for the return trip to Torquay. However about 20 miles out of St. Peter Port the brick work in the forward boiler collapsed followed by the failure of the aft boiler. The ship lost all power and began drifting toward the Casquet Rocks, about 15 miles away.

The ocean going tug Turmoil arrived at the scene at 6.30 the following morning and towed the ship back to Torquay where she anchored. Her passengers were taken ashore by the local excursion vessel Kiloran.

Lady Enchantress was towed to Southampton by Turmoil, where repairs were undertaken and the ship offered for sale. Although there were a number of prospective purchasers, none felt the vessel was a viable proposition.

She remained laid up until February 1952 when she was towed to the breakers yard of Clayton and Davie to be broken up at Dunston on the south bank of the Tyne, arriving there on 16th February 1952.

So ended the short career of Lady Enchantress, which failed when it was the heyday for other excursion vessels operating off the South Coast and from the Thames. 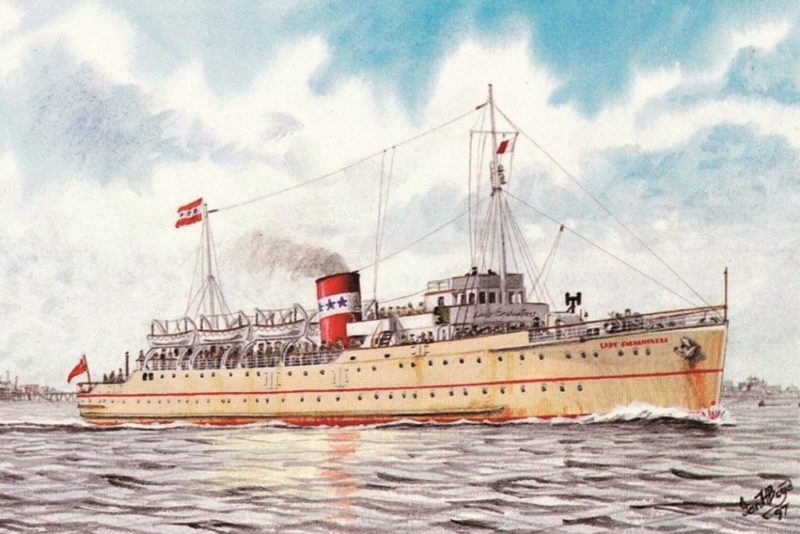 HMS Enchantress was built by John Brown & Co. Ltd. on the Clyde.She was laid down on the 9th March 1934, launched on the 21stDecember 1934 and completed on the 4th April 1935, being Yard No.540. She displaced 1,085 tons had a length of 282 feet, a beam of 37feet and a draught of 10 feet at full load. Machinery consisted of twoshaft-geared turbines delivering 3,300 shp with a speed of 18.75 knots.Armament consisted of 3 single 4.7-inch guns. During the war shereceived a single 3 inch anti aircraft guns and further smaller anti air-craft weapons. An anti-submarine ‘Hedgehog’ ahead throwing mortarwas fitted in 1942. The vessel carried a complement of about 125.As Lady Enchantress (above) she had a gross tonnage of 1,473 and apassenger capacity of 1,010.

One Hundred Years of Belships

Read about this ship, first used as an Admiralty Yacht for the Royal Navy.