Newbuild of the Month 8th August 2017 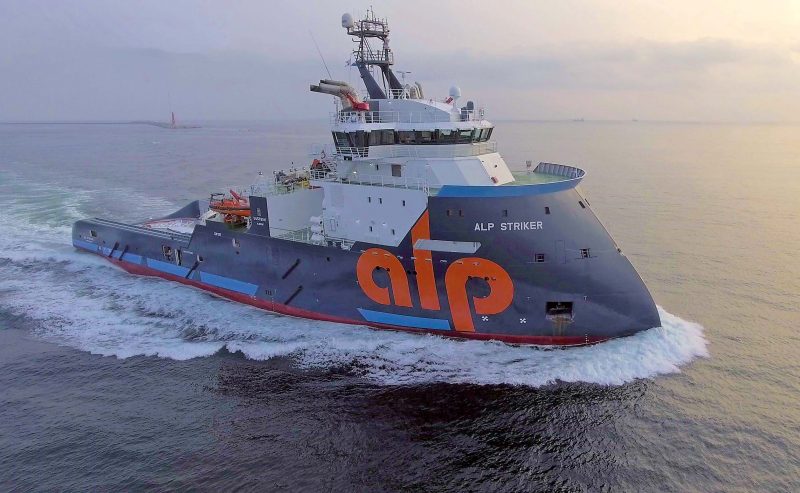 Back in 2014, 31st March to be exact, Ulstein Design & Solutions announced that it was entering a new market by way of the ocean going tug sector of the offshore market. Ulstein had sold design and equipment packages for four ocean going tugs to Niigata Shipbuilding & Repair in Japan and the vessels were to be built for the Dutch company ALP Maritime Services. The ships are primarily designed for the towing of large structures over long distances. This is a new market for Ulstein and the contract represented, at that time, the highest value in one single contract for Ulstein Design & Solutions. The vessels are of the SX157 design, developed especially for this project in close collaboration with ALP. The SX157 design has sufficient fuel capacity to tow over long distances, with the ability of towing at full power for 45 days. This is a niche market that Ulstein was eager to explore.

The Ulstein Group ASA is based in Ulsteinvik, Norway, and is the pioneer of the Ulstein X-Bow®, the inverted bow concept that redefined marine engineering. This unique bow form was launched in 2005, together with the first shipbuilding contract, and gained immediate interest from ship owners. The X-Bow hull line design has been tried and tested in all weather conditions and is one of the company’s main contributions to maritime history with vessels equipped with this bow design now being built at shipyards on many continents. So far, in excess of 100 vessels with this concept are being constructed or are in operational work around the world. This design introduces the gentle displacer, a tapered fore ship shape with a different volume distribution as well as sectional angles, resulting in a wave piercing effect at small wave heights, and also reduces pitching and bow impact loads in bigger seas. When comparing fore ship volumes with more conventional, bulbous bow shapes, the X-Bow has more displacement volume starting from the waterline. While a traditional bow vessel rises on the waves and then drops violently onto the surface of the water, an X-Bow vessel is less subject to the vertical motions induced by the waves and continues on course more smoothly, while maintaining its speed. And because it uses less fuel to get through the waves, it also helps to save energy.

Top of Their Game

The design characteristics of the X-Bow make such vessels ideal for offshore and towage work, hence being selected for the ALP order. Established in January 2010, the Netherlands based ALP Maritime Services originally provided consultancy services in the heavy transport and ocean towage market via a fleet of third party vessels before progressing into the role of ship owner. ALP has evolved into a specialist in the field of Ocean Towing, Offshore positioning and mooring of floating platforms, Heavy Transport and Salvage operations. It is an international provider of commercial and operational services in industry plus engineering, commercial and operational support and conforms to the highest industry safety standards. The company has decades of experience in complex and sizable projects and, at present, has a fleet of ten vessels at its disposal, ranging from 200 to 306 tonnes bollard pull. Speciality tasks include dual role capacity for towing and anchor handling operations, offering considerable project savings as one ship can offer two roles. All commercial and shipmanagement duties are performed from ALP’s Rotterdam Head- Quarters.

Teekay Offshore Partners L.P. agreed to acquire ALP Maritime Services B.V. on 21st February 2014. This transaction provided the catalyst to confirm an order with Niigata Shipbuilding & Repair of Japan for the construction of four state-of-the-art SX-157 Ulstein Design ultra-long distance towing and anchor handling vessel newbuildings, for a fully built-up cost of approximately $260 million, which includes the cost of acquiring ALP. Teekay Offshore Partners L.P. is an international provider of marine transportation, oil production and storage services to the offshore oil industry focussing on the fastgrowing, deepwater offshore oil regions of the North Sea and Brazil. Teekay Offshore is structured as a publicly-traded master limited partnership (MLP) and owns interests in shuttle tankers, floating production, storage and offloading (FPSO) units, floating storage and offtake (FSO) units and conventional oil tankers. The birthplace of the new Future Class ships, Niigata Shipbuilding & Repair , was originally established in 1895 as Niigata Engineering by Nippon Oil Corporation. Their first newbuild was delivered in 1906 and on 1st April 2003 the facility assumed its present day operating title. As the name suggests, the shipyard is based in Niigata City, Japan.