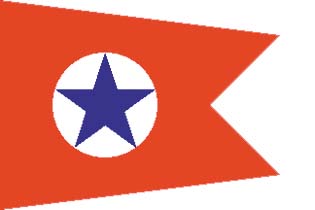 The second world war cost Blue Star Line 29 ships out of a prewar total of 38. Ships can be replaced but people cannot and the loss of 646 lives made the owning Vestey family so saddened and disheartened after the war that they decided to give up shipping altogether. Only Ronald Vestey, then aged 47, realised that Britain desperately needed to rebuild her merchant fleet and that Britain’s national finances were in a parlous state, so Ronald persuaded the family to start again. Four 65 passenger cargo liners replaced the four lost twin-funnel ships for the London east coast of South America service and new liners for the Australasian trade were put in hand – very similar to their prewar predecessors with six cargo hatches each.

Then, in 1950, four new seven-hatch liners were ordered, two with Pametrada steam turbine single screw propulsion, two with twin screw Doxford diesels. At that time engineering discussion raged about Steam v Diesel. Both had their advantages and disadvantages but it was the enormous price rise of fuel oil in 1973/74 which sounded steam’s death knell as steamers burn much more fuel oil than motorships.

They were four splendid ships, each with first class accommodation for 12 passengers. The two steamers, Tasmania and Auckland Stars were built by Cammell Laird at Birkenhead while the two motorships Wellington and Adelaide Stars were built by John Brown at Clydebank. Adelaide Star when built had the world’s largest refrigerated cargo carrying capacity.

I joined her as captain in Liverpool on 21st October 1974. Her cargo for New Zealand had been booked by that famous old Liverpool shipping firm, Gracie Beasley, whose office contained vast amounts of old sailing ship material which had been used in making that well known TV Series – The Onedin Line. Next day Mr Beasley took me out to lunch at his club. When crossing the Pacific did I ever call at Pitcairn Island? he asked over the pudding. It seemed most of his captains would go nowhere near Pitcairn, as though fearing a Fletcher Christian in his crew might take over the ship there! When I said I always called to meet my old Pitcaim friends he beamed and said he had six cases of Churchill Centenary postage stamps which had to get there for the old boy’s hundredth anniversary and no other ships would take them. When I said I would consider myself honoured to take them he poured me another drink and drove me back to the ship.

We were to sail next day. That evening a handwritten message was pushed under my door stating that a bomb had been placed on board, timed to go off when we let go our last mooring rope.

A story of life aboard the Adelaide Star